Ink on a pin

An empty space to fill in… We do not know what Joni Mitchell was thinking when she penned these words in 1970. Although, as with much fine artistry, there are multitudinous interpretations unknown to the artist. Herein with Baptisia australis, blue false indigo we focus on the flower color and the plant’s reliable capacity to fill in an empty space. Native from New York/Pennsylvania south to Texas and Georgia, this three-to-four-foot high and wide perennial, develops into a small shrub-like mass. Its alternate, leaves are palmately compound with three 1 ½ to 3-inch leaflets, developing into a bluish-green color. The flowers occur in late May – early June on long terminal racemes. Each flower is about 1-inch long, indigo-blue, although color ranges also to pale lavender or dark violet. The North American genus Baptisia is comprised of just over two-dozen species. It is part of the FABACEAE (formerly the LEGUMINOSAE), the pea or bean family of trees, shrubs and perennials, which includes 750 genera and 19,000 species. Previously we have discussed the genera Wisteria, Cercis and Cladrastis, which also produce pea-like flowers, or papilionaceous, which have five petals of three different shapes. A single upper petal is referred to as the “standard” or “banner”, extending laterally on either side are two “wing” petals, and at the bottom are two adjacent “keel” petals.

by bumblebees good lord please give me a minute …

Returning to Mitchell’s above lyrics, the “…ink on a pin…” funnels into the very meaning of the genus name, from the Greek bapto, to dye. Another species, Baptisia tinctoria, wild indigo, has a long history of use as a dye plant, with B. australis occasionally used as a secondary dye substitute. Both Baptisia species pale as a dye source, figuratively and literally, to the true indigo, Indigofera tinctoria, nativity now uncertain but perhaps Malaysia. Indigofera tinctoria, widely naturalized to tropical and temperate Asia and parts of Africa, is a USDA Zone 9 plant, not cold-hardy enough to grow at Mount Auburn. Its leaves were used in the processing of true indigo dye, the blue once so rare and valued as a luxury product.

…Blue is bunting, indigo and quick. Blue is jay, its chatter like jazz. Blue is grosbeak is bluebird is blackbird turned sky. The Chisos mountains at dusk are blue. Blue is ghost-like. Twilight. Deep border blue… A lesser known attribute, but important for Baptisia health occurs unseen underground, intricately intertwined in the complexities of soil microbiology. Soil minimally contains minerals, organic matter, water, air, insect larvae, nematodes, millipedes, fungi, yeasts and bacteria to mention a partial list. Soil bacteria called rhizobia enter in symbiosis with Baptisia roots, creating a classic example of natural mutualism. The rhizobia infect the roots to form root nodules which convert inert nitrogen gas out of the air to an available form taken up by the plant, this is called nitrogen fixation. These bacteria benefit from the sugars produced through photosynthesis by the plant. Nitrogen is a macronutrient that many soils contain insufficient levels of or even lack. Nitrogen is an essential component of amino acids, proteins, nucleic acids and other compounds beneficial and necessary for plant growth and health. Baptisia and many other genera (but not all) of the FABACEAE, along with fewer non-FABACEAE plants are capable of nitrogen fixing symbiosis.

All these years I overlooked them in the

racket of the rest, this In addition to the spring flowering display, this native perennial is drought tolerant, a highly desirable trait for our current and future landscape choices. The leaves are host food choices for indigenous butterflies including the orange and clouded sulphurs, eastern tailed blue and wild indigo duskywing. After flowers are successfully pollinated they will later develop into dark brown-blackish, 1-to- 3-inch long, inflated, oblong hardened pods, containing many loosened seeds rattling in the wind. These attractive pods are used in dried flower arrangements. This has become widely cultivated, gaining the Royal Horticultural Society’s Award of Garden Merit and chosen as the 2010 Perennial Plant of the Year by the Perennial Plant Association.

On an early June visit to Mount Auburn look for our Baptisia australis, Blue false indigo on Yew Avenue, in the Butterfly Garden at Willow Pond, Cowslip Path and off of Story Road in our southwest corner.

I live with the small shame

of not knowing the multiple names for blue… 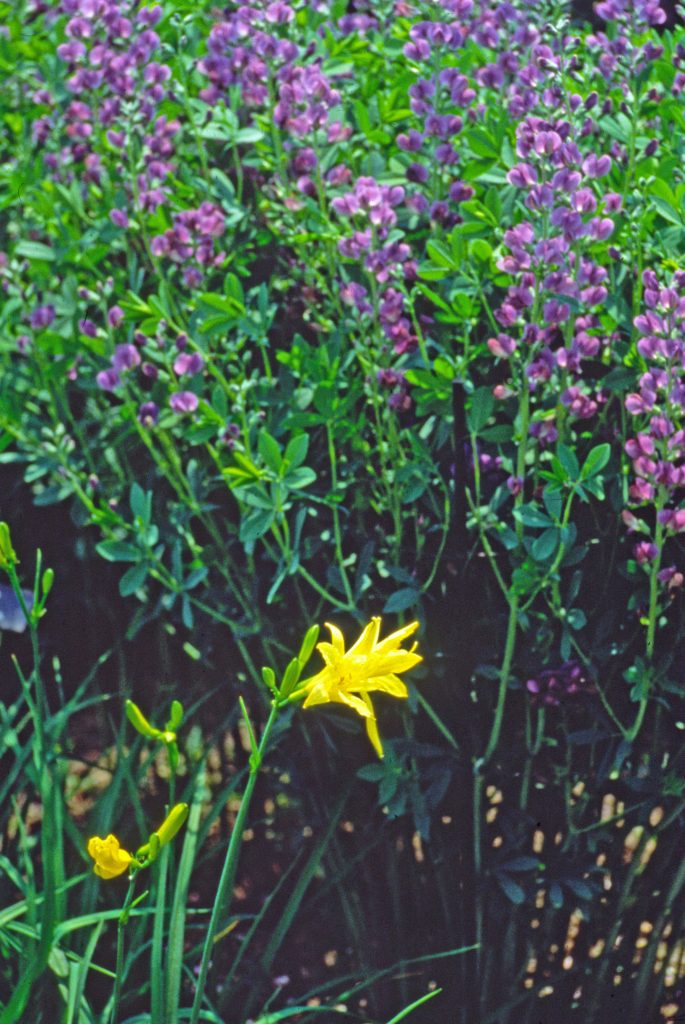 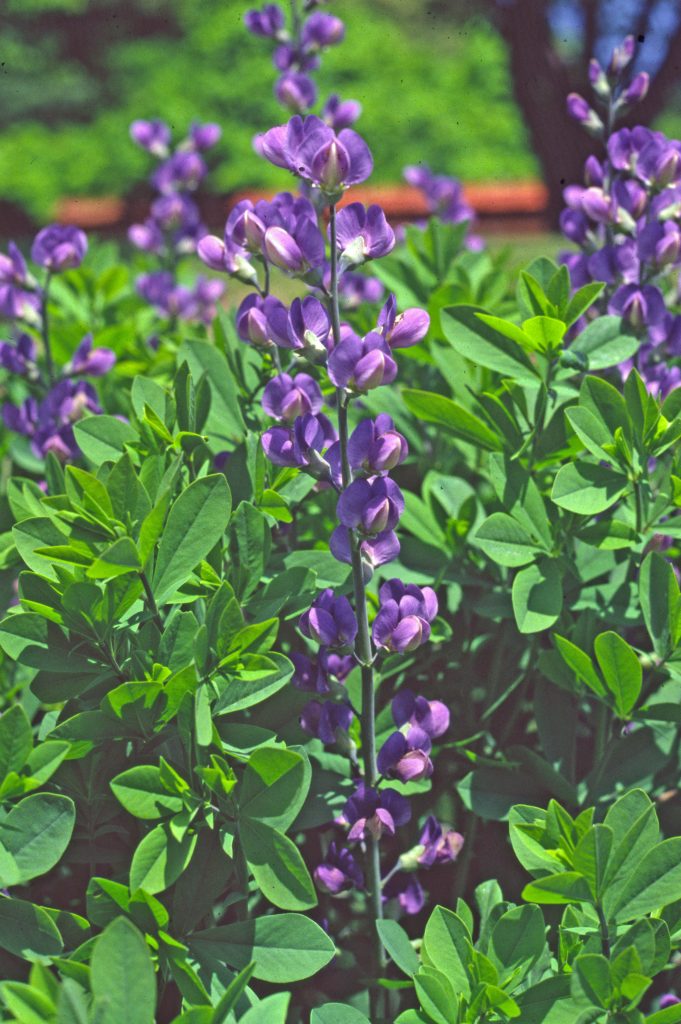 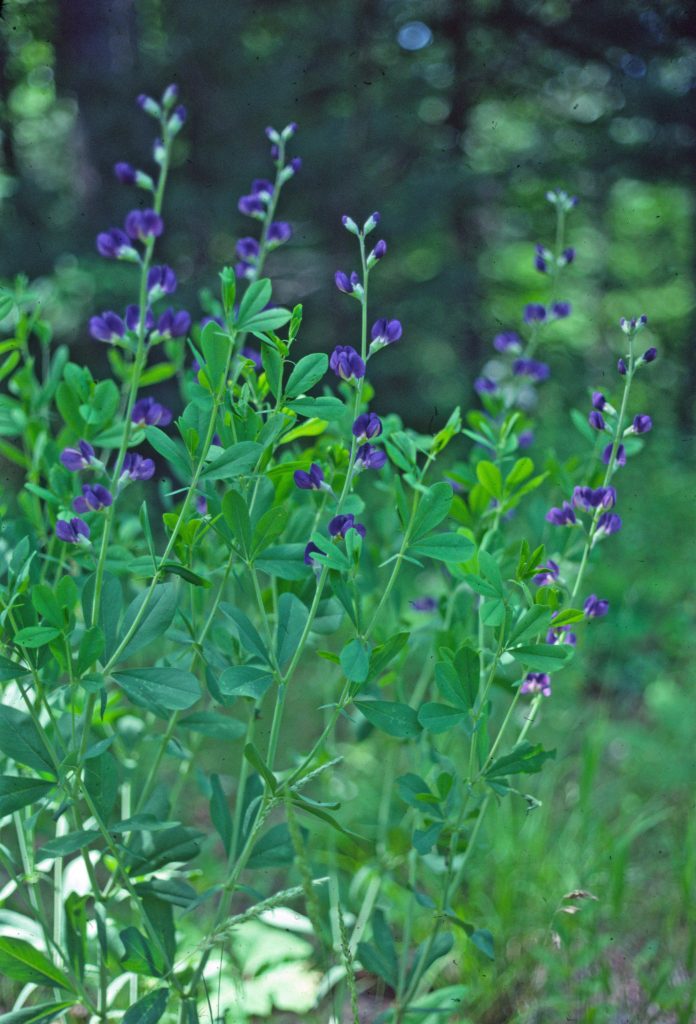 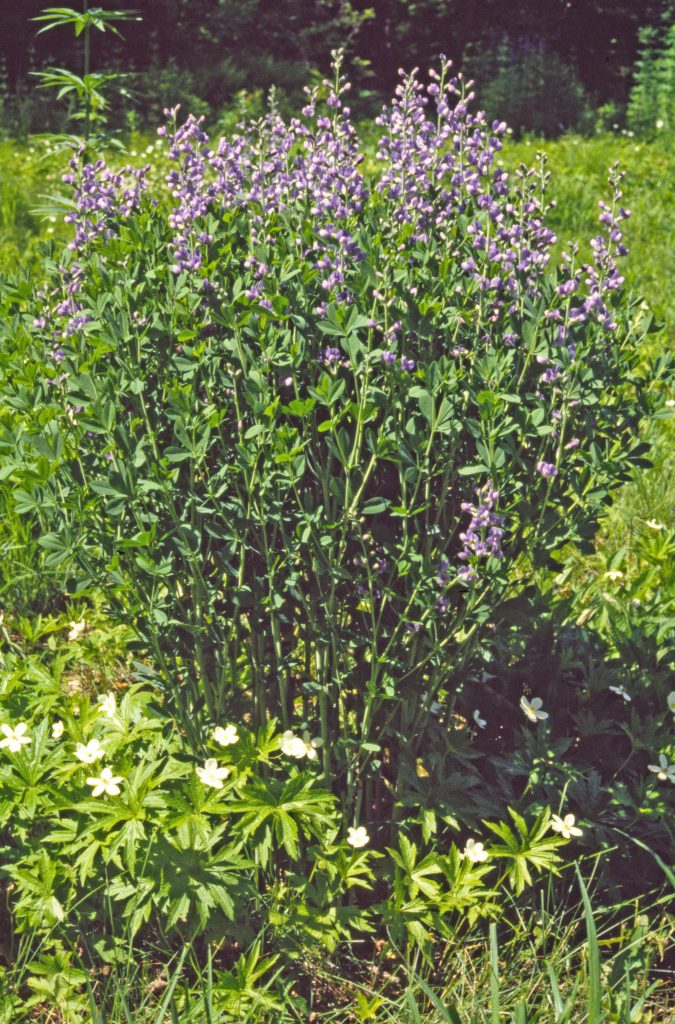