Beyond the Gates: A Cemetery Explorer’s Guide to Burial Hill Plymouth, MA 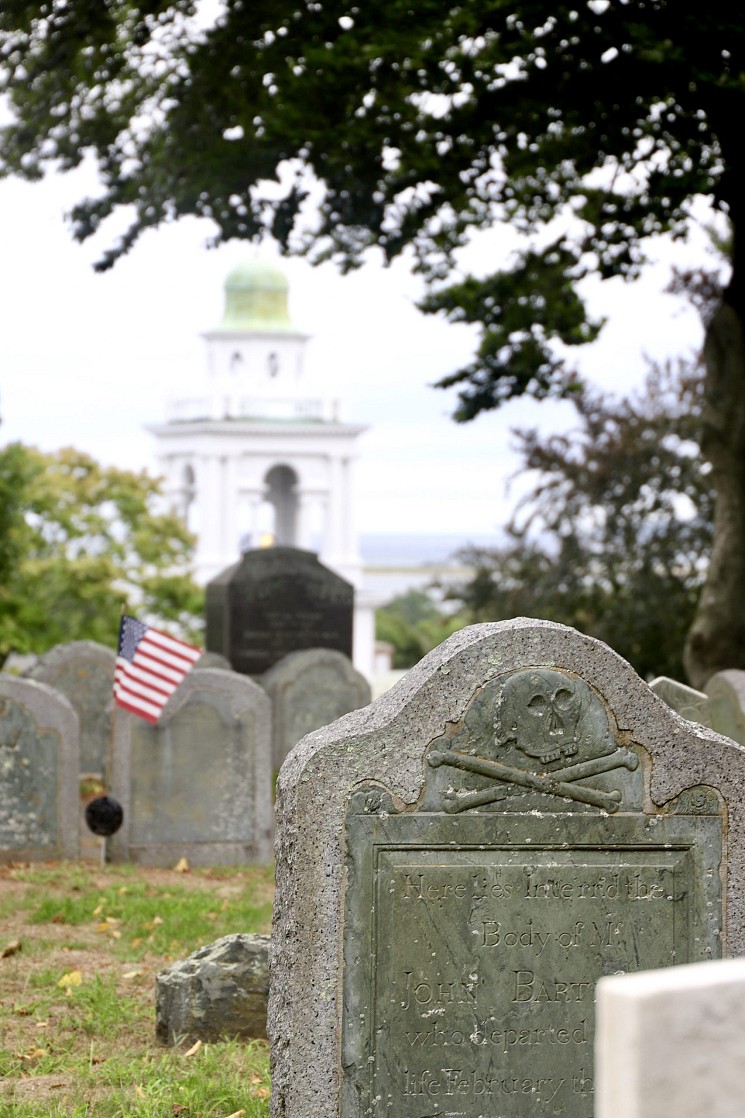 It’s 1620, and a group of religious English radicals arrive on the shores of the New World in a small, smelly, wooden floating world. Or at least, it’s new to them. Having first docked across the bay in what would be known as Provincetown, now the LGBTQ+ capital of New England, these pilgrims of the Mayflower had finally arrived to create their own community as was foreseen and blessed by God. Or at least, according to them. The actual site of their landing in the harbor isn’t known for sure, and the sheltered monument commemorating the event was placed there 121 years later. Of the 102 passengers, only forty-five survived the first winter in their newly-christened Plymouth colony. The bodies were buried across the street from where Plymouth Rock stands in Cole’s Hill, now Pilgrim Memorial State Park,  a U.S. National Historic Landmark. Burials may have continued until 1637, approximately when Burial Hill was established on higher ground. The steep geography of Cole’s Hill made it untenable as a burial site; by 1735, erosion and weather exposed many graves, and their bones were lost to the sea. More grave sites would be discovered throughout the years as Plymouth developed into a bustling, modern town. Most of these remains were eventually housed in a monumental granite sarcophagus on Cole’s Hill, after some were interred in Burial Hill, disinterred to be placed in a (now-demolished) monument that once housed Plymouth Rock, then interred again, in a rather macabre game of musical tombs. Others were just handed over to existing relatives in the late nineteenth century, and their final resting places require more research.

Burial Hill is perhaps not what those arriving in Plymouth from other parts of the world may expect when visiting one of the first major European settlements in North America. Set overlooking Plymouth harbor and its downtown area, Burial Hill is neither a common graveyard nor a grand garden cemetery. It’s not even hallowed ground. Plymouth’s first fort and meetinghouse were constructed atop the highest elevation point, and many of the colony’s settlers who survived are buried around the meetinghouse’s site, the brick fragments of the structure still emerge.

As facing east towards Jerusalem wasn’t required in a Puritan graveyard, the markers point in every direction, creating haphazard clusters of history containing many names of mythic proportion in the American ethos. William Bradford (1590 – 1657), one of the colony’s first governors and author of Of Plymouth Plantation (c. 1630 – 1651), is buried beneath a modest granite obelisk; Mary Allerton Cushman (1616 – 1699), the last surviving Mayflower passenger, lies somewhere beneath another, massive obelisk erected  by her descendants. The illustrious Warrens of Revolutionary War fame share the earth with the lesser known but no less dramatic Dr. Francis LeBaron (1668 – 1704) and his descendants. LeBaron, a French captive who became one of Plymouth’s first practicing surgeons, later died in a knife fight at a local alehouse.

In addition to the visible stones that dot the landscape of Burial Hill there are also unmarked  mass graves located in the rear of the cemetery, toward which many other stones have slid due to erosion. There is some debate as to whether or not these pits contain remains of victims related to the General Arnold shipwreck tragedy of 1778.

It is known that Captain James Magee (1750 – 1801), commander of the ship, is not interred directly beneath the monument that bears his name. Having not perished with his crew, Magee is most likely buried in Roxbury, where he died at the age of 51. There is currently an initiative underway to provide a memorial for the nameless resting therein. Generations of Plymouth residents populate Burial Hill, with an estimated two thousand registered souls buried in its depths up until 1957.

Many of us who are used to the stark, cramped, uncouth style of old New England burial grounds will find an interesting foil in Burial Hill. Surely enough, the repeated motifs are there along with families of stones obviously carved by the same person and perhaps selected by the customer out of a line-up of options. However, within these predictable boundaries, there is a creative and colorful undercurrent present throughout Burial Hill that provides evidence of a sentimentality surrounding death that has long since been lost on our culture. There is perhaps no finer example of this than Burial Hill’s large and diverse collection of portrait stones.

Portrait Stones rose in popularity during the 18th century, and you can even find a few of them in Mount Auburn: Margaret Fuller’s grave is one of them. While easily overlooked pieces of ephemera, portrait stones offer a touching connection to the unfamiliar populations of a distant past. People who perhaps had no other physical representation of their appearances throughout their lives, may have a rudimentary portrait of themselves above their eternal resting place. The word “may” is used in the last sentence because, while occasionally portrait stones had some resemblance to the physical appearance of the subject, much of the time they did not. Instead, portrait stones were created to represent a vague idea of the individual buried. Were they a woman or a man? Adult or child? Answering these questions with a portrait gives us deeper insight into the identities of the deceased than an angel with wings or a skull and crossbones would, however, to call it a portrait in the artistic sense of the word would be an overstatement on the specificity that portrait stones offer. It is common to see portrait stones throughout New England seemingly depicting the same exact person with the same facial structure, same hair, same heart locket. This phenomenon can be explained by the demand and convenience of consistency among the stone-carvers of early New England.

Up until the Civil Rights movement of the 1960s it was common, especially in the southern United States to encounter cemeteries segregated by race and/or religion. Even now, consecrated ground can be exclusive to the specific congregation or religious denomination that oversees it. As mentioned above, Burial Hill in Plymouth is not consecrated by any one religion, and as an area of land, served more of a practical purpose as a place to cordon off the dead, than a statement on the hallowedness and sanctity of the ground itself. Early colonial settlers did not always have the luxury of choosing a time and a place when it came to handling the bodies of their community members. All of this is to say that sometimes racial animosity and structural racism did not prohibit the burial of Black or Indigenous people into majority-white Christian burial grounds.

According to Cheryle Caputo of Friends of Burial Hill they know for certain that the Indigenous populations in and around Plymouth were sometimes buried in Burial Hill by white settlers. However, there is no record of any monument or location where they were buried. Burial Hill itself is located on Pauquunaukit (Wampanoag) Land, as is the rest of Plymouth. Caputo also notes that there are monuments for only two known Black people in Burial Hill. Likely, there are far more, but their locations and identities are lost to history.

One of the two known Black people buried in Burial Hill is Charles B. Allen, a veteran of the Civil War and a member of the 5th Massachusetts Colored Volunteer Cavalry, which was the only Massachusetts cavalry regiment composed entirely of Black men. The regiment had early success in its efforts stationed around Washington D.C. sustaining no losses until June of 1864, where they ran into confederate troops at Baylor’s Farm on their way to Petersburg, Virginia. In the fight, three men were killed and nineteen officers and other men were injured. Eventually, the Massachusetts 5th was able to push the confederate soldiers to retreat. Allen survived the war and served in the regiment from 1863 to 1865 with distinction.

The second known Black person buried in Burial Hill is located right across the path from Charles Allen. Her tombstone reads: “In memory of Nancy Williams a faithful (African) servant in the family of Rev. F. Freeman. Died Nov. 24 1831 Aged 25 years.” In our (very) cursory searches we have not been able to find any information on Williams’ life, but with poignancy, we do note her date of death is exactly 2 months after the consecration of Mount Auburn Cemetery on September 24th 1831.

A special thanks to Cheryle Caputo, founder of Gravestone Conservation Services, Inc. and President of Friends of Burial Hill, who kindly gave us a guided tour of the graveyard on a chilly Autumn afternoon. GCSI and FoBH offer many cemetery preservation services, including but not limited to grave marker cleaning, repair, and resetting. We were delighted to hear about their subterranean findings using GPR (Ground Penetrating Radar), even more so to see the stunning transformations of Burial Hill’s ancient stones performed by Cheryle and other trained volunteers since 2010. Their Gravestone Surveys are particularly fascinating reading. We’re excited to participate in their next round of workshops, and look forward to future collaborations!

Tagged: Beyond the Gates