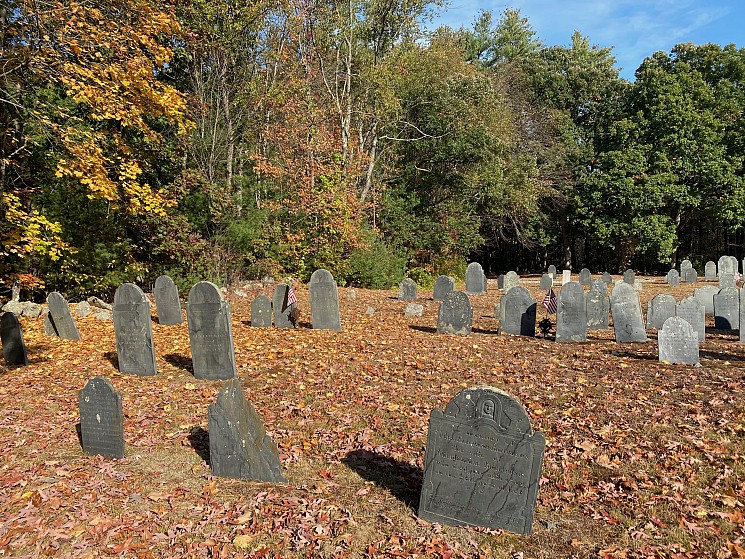 Near and dear to my heart is the Old Burying Ground in my hometown of Townsend, Massachusetts. It’s the first image of a graveyard that comes to mind, and the old section of the nearby Hillside Cemetery isn’t far behind. Townsend, a once industrious little town on the New Hampshire border, is now a picturesque pass-through, unless antiques or farm stands are on your mind.

The Old Burying Ground is situated on Highland Street, across from Old Meetinghouse Hill Road, on the site of which my friend and I used to play as children. Little ghouls that we were, we also frequented the graveyard. It was here that I first became acquainted with the wealth of funerary art hosted by our little town, dating from at least the 1730s to the early nineteenth century. From death’s heads to a full figure angel to architectural and decorative urns, this little graveyard runs the full pictorial gamut of early period marker decoration. Stones by Lowell’s B. Day, L. Parker, and earlier Worcester-style artisans are in abundance. Mostly consisting of local founding family plots, the Old Burying Ground hosts many veterans of the Revolutionary War, and quite a few victims of a smallpox outbreak. Early photos of the Old Burying Ground suggest that graves may have been moved to Hillside Cemetery to increase property on either side, or they may have only moved the stones.

Further down Highland Street toward Townsend Common is the Hillside Cemetery, a sprawling operational burial ground watched over by the Nutting family mausoleum on Fessenden Hill. Perhaps the grandest monument in the cemetery, citizens started buying plots on the right hand side when the Old Burying Ground became too crowded. Standard nineteenth century motifs are the norm, with forgotten family vaults now making mansions for rabbits on either side of the hill.

The most notable interrant is as prominent as he is unexpected; beneath a monolithic cube of granite lies Henry Price (1697 – 1780), who is credited with bringing Freemasonry to America in 1733. Having lived in Townsend from 1766 to his death, Price’s remains were moved from the Old Burying Ground by the Freemasons in 1888. Each May, a delegation makes the pilgrimage to Townsend for Memorial Day. Although, the monument is impressive, one must wonder at the design of his original gravemarker.