There is no better time to come and enjoy our impressive evergreens. Mount Auburn’s conifer collection is noted for its size and diversity. With more than 80 different taxa and more than 1,500 plants, it is comparable to the conifer collections at … Continue reading →

Now is a great time for a second look at many of our deciduous trees and shrubs. Even without their more showy foliage and flowers, many of our plants have something to contribute to the winter landscape. From the the impressive size and shape of some trees … Continue reading →

Early signs of spring appear throughout the landscape in March.  The cheerful yellow blossoms of witchhazel that appear early in the month and the beautiful carpets of scilla  that emerge by month’s end remind us that warmer days are soon on their way. … Continue reading →

Mount Auburn is painted in shades of yellow, pink, white and lilac thanks to the daffodils, forsythia, magnolias, and redbuds now blooming.  For many, though, it is the April flowering of Mount Auburn’s 20+ varieites of ornamental cherries that truly signal spring’s arrival. … Continue reading →

It is no wonder that Mount Auburn welcomes so many visitors each May.  Flowering dogwoods, crabapples, lilacs, and azaleas are just some of what is on display.  If you’ve never been to the Cemetery, now is the time to make … Continue reading →

Though May might be the peak of spring bloom, there is still plenty of interest in June.  Rhododendrons, Mountain Laurel, and Kousa Dogwoods add plenty of late-spring color to the landscape. The annual and perennial plants planted in flower beds throughout … Continue reading →

In July, make your way out to Willow Pond for a glimpse of our butterfly garden at its peak. As you walk at to the pond, you’ll notice a number of summer-blooming trees and shrubs adding seasonal interest to the … Continue reading →

Late summer blooming ornamentals provide plenty of reasons to visit Mount Auburn, though perhaps the best reason to visit the Cemetery in August is to seek shade beheath the Cemetery’s dense canopy of shade trees.  Maples and oaks are among our shade … Continue reading →

As the last of our summer-blooming plants make a showing in September, other plants begin showing the tell-tale signs of autumn’s approach.  Our wildflower meadow, located at  Washington Tower, is now at its peak as we bid farewell to one … Continue reading →

By mid-October Mount Auburn’s landscape is awash in color.  As our many deciduous trees and shrubs begin to transform their foliage into jewel-tone shades of red, orange, yellow, and purple, other plants set out their fall fruits and nuts. Here are some … Continue reading →

The diversity in Mount Auburn’s collection of trees ensures an prolonged foliage season each fall.  Even in November, there is still plenty of color in the landscape. From our noble oaks displaying autumn color to the fall-blooming witchhzel, there is plenty to see at the Cemetery.  Here are … Continue reading →

As our deciduous plants drop their last leaves we welcome the winter season. Now is the time to explore Mount Auburn’s many plants displaying four season interest.  The diversity in our horticultural collections ensure that a visit to Mount Auburn at … Continue reading →

belt, before insinuating your noxious

While in bloom, Actaea racemosa, Bugbane, Black Cohosh, with tall stems and long fleecy flowers is truly eye-catching. These same blossoms emit an unpleasant odor. Centuries ago, some thought this smell could repel insects, hence one common name bugbane. The non-entomological etymology has a basis from Algonquin Native Americans. Cohosh is derived from co-os, meaning pine tree, alluding to the pointed spikes.

END_OF_DOCUMENT_TOKEN_TO_BE_REPLACED

When you visit Mount Auburn this summer you may notice some palms and other tropical plants popping up in the landscape.  While they may be unusual for this climate, they’re not the first time Mount Auburn has showcased exotic flora.

END_OF_DOCUMENT_TOKEN_TO_BE_REPLACED

…But oh! For the woods, the flowers

And the smiling shrubs in bloom,…

English naturalist Mark Catesby (1683-1749) is credited with introducing Calycanthus floridus, Carolina allspice during his colonial explorations. His Natural History of Carolina, Florida and the Bahama Islands, was the first published work of the flora and fauna from these locations. Two large folio volumes with 220 personally engraved and individually hand-colored plates with descriptions were published between 1729 and 1747. In plate 46 he illustrated the Carolina allspice along with a cedar waxwing.

END_OF_DOCUMENT_TOKEN_TO_BE_REPLACED 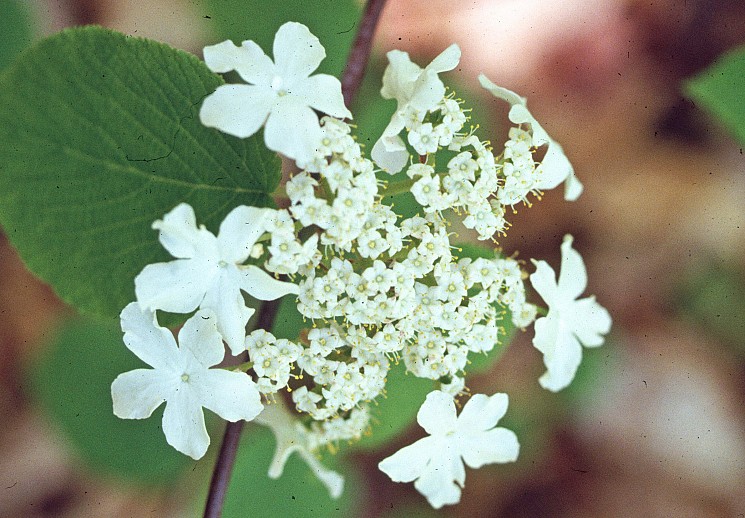 …We tramped for miles on a wooded walk

Where dog-hobble grew on its twisted stalk…

Recently, while entering the higher end of Sumac Path heading down towards Consecration Dell there were several plants of Hobblebush, Viburnum lantanoides,just opening their spring flowers. These visually distinct blossoms are arranged in 4 to 6-inch-wide, circular, composite, corymbs (flat-topped flowers). Rendered showy by an outer ring of white flowers, each 1-1 ½-inch, with 5-parted bracts, these all are sterile. Their center is composed of numerous small, true reproductive flowers, of an off-white shade.