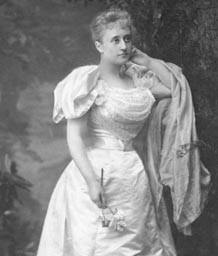 Clara Endicott Sears, preservationist, historian, and author, was born in Boston on December 16, 1863.

Born into a wealthy family, Sears was a descendant of John Endicott and John Winthrop, early Massachusetts Bay Colony governors. Educated by her mother, she became fluent in French and acquired a passion for history on family trips to Europe. Her grandparents encouraged interest in literature by reading her the works of family friends Henry Wadsworth Longfellow (Lot 580, Indian Ridge Path), James Russell Lowell (Lot 323 Fountain Avenue), and Louis Agassiz (Lot 2640 Bellwort Path).

Though she was beautiful and prized for her social status, Sears thought marriage restrictive and made a pact with cousins Mary Endicott and Fanny Mason (Lot 3844, Fountain Avenue) to never marry. Sears led an independent lifestyle, acting as her mother’s adult companion, and traveled to Europe to visit Mary, who had married and moved to England.

Sears purchased 35 acres of land in Harvard, Massachusetts in 1910 and build a mansion and working farm on the property. When she discovered that her property was connected to Fruitlands, Bronson Alcott’s failed utopian village, she bought the 300 acres of adjacent property. In 1914 she researched and restored the Alcott farmhouse with the aid of the Massachusetts Historical Society and the Society for the Preservation of New England Antiquities (now Historic New England).

Sears made a career of preservation at a time when the pursuit was uncommon, and established the Fruitlands Museum to record Alcott’s experiment. Around the same time, Sears befriended a local Shaker community who asked her to record their history and preserve their oldest building. She restored the 1794 structure and filled it with Shaker objects, effectively creating the world’s first Shaker museum. In addition to publishing Gleanings from Old Shaker Journals (1916), a study of original Shaker manuscripts, Sears also wrote several fictional works.

In 1945, Sears was finally able to open her Hudson River School exhibit to the public. She received many awards for her work in historic preservation including the Medal of Honor of the National Society of New England Women and the first Annual Author’s Club Citation of Distinction. She died in Boston in 1960. Clara Endicott Sears is buried at Mount Auburn in Lot 1847 on Lupine Path.