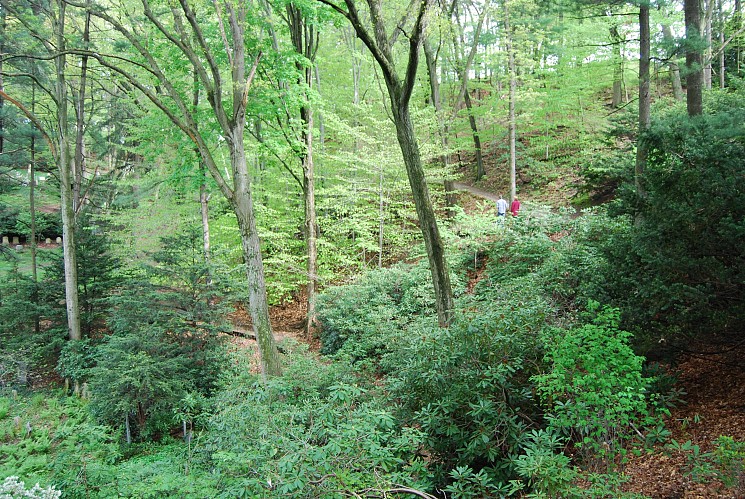 In his Consecration Address, Mount Auburn’s first president Joseph Story referenced the new Cemetery’s naturalistic qualities: “sheltered valley… silent grove… lofty oak… rustling pine… and the wildflower creeping along the narrow path.” Just three decades ago, little about the Dell resembled the woodsy and wild qualities Story had so eloquently described in 1831. In contrast to most other parts of Mount Auburn, the Cemetery had minimally managed Consecration Dell for more than a century. In that time, invasive Norway Maple trees became co-dominate with Red Oaks in the forest canopy. The invasive trees competed (and won) against the native vegetation leaving the forest floor largely bare.

By the end of the twentieth century, and as a product of its 1993 Master Plan, Mount Auburn developed new strategies to preserve, maintain, and enhance its historic landscape. For Consecration Dell, the last vestige of the original “rural cemetery,” this meant restoring a woodland that reflected Mount Auburn’s first decade when nature dominated art in the new Cemetery.

Today, visitors can experience Consecration Dell as a place both timeliness and very much of this time. The restored landscape that recalls Mount Auburn’s earliest years also reflects a modern approach to environmental stewardship. And, just as it has done for visitors throughout the eras, the Dell celebrates nature’s incredible power to console, heal, and inspire.

Following the Master Plan recommendations, Mount Auburn initiated work to restore the woodland in 1997. Over the next twenty years, this work continued one section at a time from the vernal pool in the Dell’s center to the surrounding slopes. The project’s early phases included removing Norway maples and other non-native species, such as Japanese yews and Japanese barberries. Thousands of native New England plants planted in their place established a new forest floor.

In addition to their historical appropriateness, these plants helped to reverse years of soil erosion. Plant roots help to anchor the soil in place below ground. Above ground, their foliage protects dry topsoil from being swept away by wind and breaks rainfall to prevent soil runoff. Because there was so little existing understory vegetation, this meant installing thousands of new plants at each stage of the project. Temporary irrigation allowed the plants to thrive, while regular weeding prevented Norway Maple seedlings from once again taking over. In some sections, the Cemetery injected plants into compost-filled burlap tubes pinned to Dell’s slopes. This strategy gave plants time to become firmly established on the slopes. The burlap since decomposed and the plants are now anchoring the soil independently.

As the Dell restoration progressed, the Cemetery’s horticultural practices were also evolving to consider wildlife habitat improvements. The Dell was (and is) ecologically significant in part because of a resident population of spotted salamanders that live beneath the leaf litter along the Dell’s slopes. Each spring, the salamanders emerge from the surrounding hills to breed in the vernal pool. From its inception, the project aimed to enhance the area aesthetically while also respecting the salamanders’ habitat requirements.

Over two decades of work, the goals of protecting and improving habitat expanded to address all wildlife’s needs. Though it hosted many birds, the Dell did not have the woodland understory vegetation necessary to constitute a “shrubland habitat” until more recent phases of the project addressed this specific need. Working with wildlife and horticulture experts, Mount Auburn curated a plant community that offers nesting materials, protection, and food sources for insects, amphibians, mammals, and birds. Consecration Dell is now the cornerstone of Mount Auburn’s comprehensive initiative to improve the natural vegetation and wildlife habitat throughout the Cemetery landscape.

CONSECRATION DELL is the heart of Mount Auburn. Here, you can imagine history taking place, marvel at the beauty of nature, and find solace from the cares of the world in a woodland oasis.

The Consecration Dell Woodland Restoration Project has been made possible with generous support from the A.J. & M.D. Ruggiero Memorial Trust and other individual contributions to the Friends of Mount Auburn.