In 2013, Mount Auburn was honored to be the first cemetery ever awarded a Museums for America collections stewardship grant from the Institute of Museum and Library Services (IMLS). The grant provided conservation treatment proposals for thirty of the Cemetery’s most significant monuments, and since that time, the Friends of Mount Auburn has been working hard to raise funds to preserve those monuments most urgently in need of treatment. To date, an impressive list of projects has been completed by Daedalus Art Conservators of Watertown working with Mount Auburn’s preservation and curatorial staff: Conservation of the Binney Monument was completed in 2014, the Magoun Monument in 2015, and the Channing Monument in 2017. Meg Winslow and Gus Fraser inspect the work in progress

This September 2017, we are delighted to announce the completed conservation of the Coppenhagen Monument (1874) on Sycamore Avenue. The significant monument represents the work of Martin Milmore (1844-1883), one of Boston’s leading nineteenth-century sculptors. Milmore is best known for a number of Civil War memorials including the Soldiers and Sailors Monument (1877) in Boston Common, the Roxbury Soldiers’ Monument (1867) at Forest Hills Cemetery, and here at Mount Auburn, the magnificent Sphinx (1872) memorial to the civil war.

In 1871, Mehitable Coppenhagen, married to German-born Arnold Coppenhagen, commissioned Martin Milmore to create a memorial for her daughter, Maria Frances Coppenhagen, who had recently died at age thirty. “I have engaged to pay Martin Milmore the artist $2500 to make a marble monument and set it on my lot at Mount Auburn,” Mehitable wrote. “The angel’s face to be a likeness of my deceased daughter’s face, Maria Frances Coppenhagen.”[i] Milmore, whose name appears twice on the statue, carved the Coppenhagen Monument in Rome, where he operated a studio from 1872-1877 to work on the large Soldiers and Sailors commission for the Boston Common. A flowering dogwood to the left and a Japanese white pine to the right beautifully frame the statue within the landscape.

The graceful six-foot-high portrait statue bears the features of Maria and stands on a tall pedestal with the inscription: “My beloved daughter Maria.” Maria, draped in Classical robes, is portrayed as the Angel of the Resurrection: her extended right arm and curved fingers are raised toward the heavens and in her left hand, she holds a trumpet by her side that will “sound on the Day of Resurrection.” Art critic Chandler Post lauded Milmore’s Coppenhagen memorial as “the acme of the artist’s capability in spiritual expression,” demonstrating the sculptor’s ability to conceive an ideal form “with real and personal content.”

Milmore’s masterful combination of portrait and ideal representation exemplifies a nineteenth-century memorial that is both tender and timeless. Yet, with the New England climate and the vicissitudes of time, the artistic integrity of the monument had been lost. Lichen, moss, and soil had stained the graceful figure, the fragile Italian marble surface had eroded, carved details had been lost, and several cracks needed repair. This fall, Daedalus, Inc., fine art conservators provided the successful conservation treatment: gentle cleaning of the surface with soft brushes, filling the cracks with a soft lime mortar, safely removing dirt and accretions with a portable laser, and employing a chemical consolidant to strengthen and stabilize the stone. Using fills, tinted to look like the original marble, the conservator took on the challenging task of redefining some of the architectural detail on the pedestal. The biggest challenge, however, was moving around the monument during conservation, and the delicate nature of everything from her fingers, to the trumpet, to her massive marble wings. While talking about the project with Curator of Historical Collections Meg L. Winslow, conservator Joshua Craine said he was particularly struck by the lightness and beauty of the monument, “It has so much emotion.” Indeed, the Coppenhagen statue is one of the most beautiful figures on the grounds and we are fortunate that this significant work of art by Martin Milmore is now preserved for future visitors to appreciate once again. 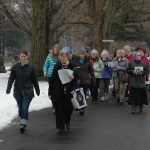 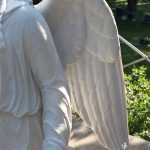 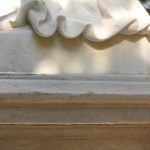 [i] Will of Mehitable Coppenhagen in Ernest Rohdenburg III, “A Bid for Immortality: The Sculpture and Life of Martin Milmore,” quoted in Cynthia Mills, Beyond Grief: Sculpture and Wonder in the Gilded Age Cemetery (Washington: Smithsonian Institution Scholarly Press, 2014), 195 n. 25.