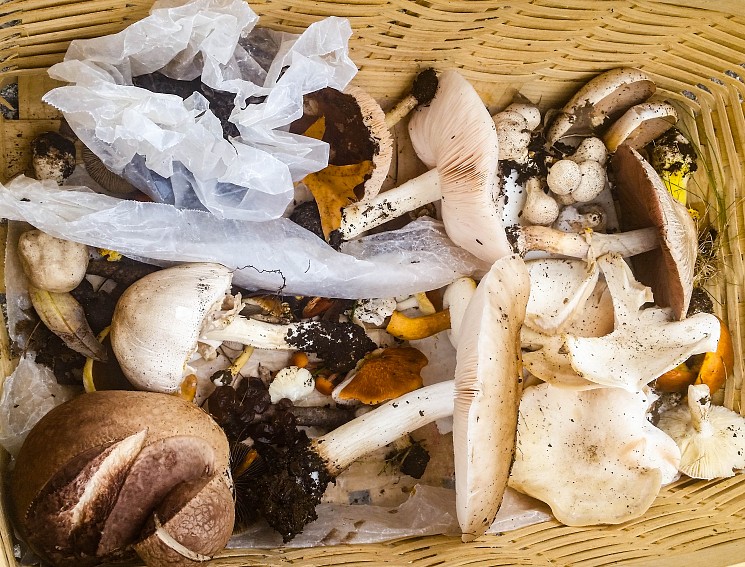 On October 4, 2018 Ron Trial led a citizen science mushroom ID walk at Mount Auburn Cemetery.  Mr. Trial is a former president of the Boston Mycological Club.  He served the club from the late 1970’s through the early 1980’s and remains an enthusiast for collecting and identifying fungi.  Ron also volunteers at the greenhouse at Mount Auburn.

Several current citizen scientists, as well as some new faces met Ron on Laurel Avenue, where introductions, guidebooks, and collecting parameters where discussed before the group ventured into the woodland surrounding Consecration Dell.

Each participant brought along a basic mushroom survey kit, which included: a collecting basket, pocket knife, 10x lens, wax paper, and a smart phone for photos and ID assistance via apps such as the Rogers Mushrooms App.

The group spent the next ninety minutes carefully exploring the Dell and collecting fungi for identification.  Conditions have been excellent for fungi growth, due to the mild temperatures and the rainy end of summer and start to autumn.  As we strolled through the woodland, we carefully collected sixteen species of fungi.  Common and edible mushrooms, such as the Horse mushroom (Agaricus arvensis) and the Jelly Ear (Auricularia auricula-judae) were collected, as well as many that require additional study to ensure proper identification.  Ron explained to the group that even though he has many years of experience identifying fungi, he most likely would only be able to identify about 10 percent of the species we would see.  This is not uncommon for any avid mushroom hunter and it is why it is important to take your time and make use of guidebooks and apps when attempting to ID your discoveries.

Some of the most fun and interesting things we learned were the strange and interesting names often given to mushrooms.  The Angel of Death (Amanita ocreata) which is not found here (native to the Pacific Northwest) was a favorite.

We plan to offer more mushroom ID walks in the future and Ron plans to lead a fungi training for our Citizen Science Naturalist Program in 2019.

About the Author: Paul Kwiatkowski