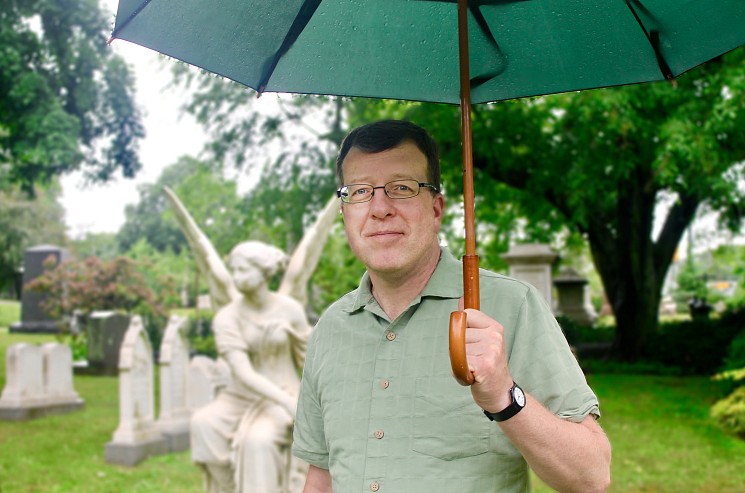 This article was written by Artist in Residence, Patrick Gabridge.

When I tell people I’m the artist-in-residence at Mount Auburn Cemetery, they are often shocked that such a thing exists and also very curious about what, as a playwright, I intend to do at a cemetery. Most folks assume I’ll be writing about the various people buried here. Which I will. But even from the very start of my residency this winter, I knew I wanted to write about the diverse and unique natural environment of Mount Auburn.

Since I started in January, I’ve been walking the grounds, toting binoculars with birders at dawn, looking for nighthawks at sunset on the tower, shining flashlights in Consecration Dell looking for spotted salamanders, and trying not to step on tiny toadlets by Halcyon Lake.  And, more crucially for a playwright, I’ve been listening to the people who are deeply invested in protecting and improving the flora and fauna that make Mount Auburn such a special place. The challenge for a writer tasked with creating plays about Mount Auburn is the embarrassment of riches when it comes to potential stories. A hundred thousand tales are wrapped around the people interred here, and they are surrounded by hundreds of species of birds and trees, and thousands upon thousands of plants, all of them tended by dedicated stewards. In the end, I chose to create two series of short plays–one mostly about historical figures buried here and their role and relationship to the formation of American identity, and another set of nature plays. Some are already written and will be read on the grounds in September—like a short play called Hot Love in the Moonlight is about the mating habits of spotted salamanders. There will be a play about birds and birders (Cerulean Blue), and another about Asa Gray and Louis Agassiz. I’m still exploring play ideas around some of the secret mushroom spots that may or may not exist, and there will almost certainly be a play inspired by conversations with the grounds crew members who help Mount Auburn remain the gem that it is.

Beyond writing and research, the next step begins with reading and playing with the text with actors and audiences. This September, you will see me and Courtney O’Connor, my director, gathered with clumps of actors at Consecration Dell and near Auburn Lake, and other spots, with scripts in our hands, reading dialogue aloud.  We’ll see if the structure and content of the work makes sense, if it has power, but also how it works in three-dimensions. How does it feel to have our voices and bodies in action on the actual grounds? It’s one thing for me to imagine how it all feels and sounds when I’m typing away in my office, but it’s entirely different when we have actors do it while standing on the edge of a pond. At the public readings in September, we’ll start exploring what the plays feel like with an audience. (Plays are nothing without an audience.) When staging site-specific work there are additional concerns we don’t have in a traditional theatre, where the environment is controlled and well understood. We have to ask questions about where does the audience sit or stand, is there noise (traffic, neighbors) that will impact that site? How do the plants and topography affect where we can stand, how much sound reaches the audience, the visual palette?  Entrances and exits are never simple when performing outdoors. How does the audience know when the show is over? And, in a cemetery, where do we perform such that we are respectful of the people who are buried here. How do we perform plays about nature, in nature, in ways that don’t harm the environment we’re talking about?

Having to answer all these questions, as we explore people and ideas in the text, is part of the challenge and fun of doing site-specific work. The other thing I truly love about this kind of theatre is that the barrier between the performers and audience is much more fluid and informal than in work created in a traditional spaces. The enormity and concreteness of the natural world around the very small play we’re creating helps unite the audience and performers.

In June of next year, we will fully stage the Nature Plays on the grounds, in a production that we hope will engage and delight audiences in all kinds of interesting ways. In the meantime, my team and I will be researching, writing, and playing, as we explore ways to illuminate the important natural elements of Mount Auburn Cemetery.