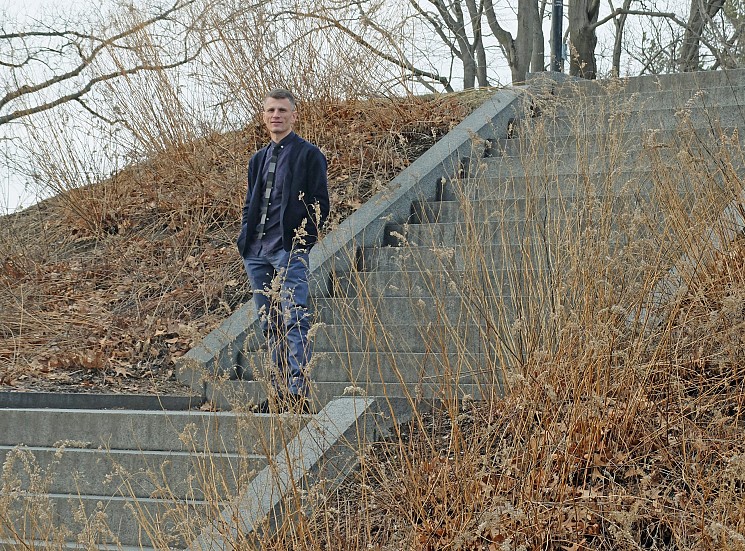 What is your background as an artist?

When I was a kid I was impossible to get gifts for. I hated toys and thought make believe was ridiculous. I was happiest fulfilling my imagination by making something out of nothing. Suffice it to say I had more markers and pens and pencils and ink than anyone else I knew. I still do!

To say it simply: I started making stuff when I was quite young, and I just think I haven’t stopped.

What are the primary materials that you work with?

I was trained as a filmmaker before I attended art school, and I bring the sensibility of working as a director with me. That means I conceive of projects in the same way you would a movie. First, I do a deep dive of reading and research, so I can be as informed as possible on my subject. Second, I try to zero in on what it is I’m trying to communicate, which is sometimes a story, sometimes an argument, and sometimes a feeling, but usually all three. Third, I make endless sketches—and keep in mind, I not only mean drawings, I also mean taking photos, collecting sounds, making small objects, writing, and even exploring or improvising movement. It’s through this process that I begin to figure out what form my work will take; and almost all the time, there’s not just one formal solution. When I finish a project it might include paintings, digital media, video or sculptural installations, written works, and performances, among lots of other forms. Like a movie director, for all of these different formal manifestations, I get help from assistants, fabricators, and collaborators.

In other words, it’s my job to conceive of the entire work as a whole; to determine the many different ways my ideas can be turned into something an audience can see or experience; and then to manage the technical aspect of actually making everything.

Describe how your relationship to the Cemetery developed. What first drew you here? Do you have a favorite place at Mount Auburn?

I have been developing a new body of work for about three years titled “Shake or Pop.” It’s about Americana, but not necessarily the type everyone is used to seeing. Instead it looks at the invisible kinds of American craft that live in everything from tools to mass-market home furnishings, the kind of stuff that’s in your shed or garage or living-room or kitchen right now. The project has many different parts—painting, weaving, photography—but one part in particular brought me to the attention of Mount Auburn.

I am making miniature depictions of portions of cemeteries from around the country out of carved stone. I asked Mount Auburn if I could visit during dusk, when it was quiet and largely empty, so I could use special photographic equipment to capture a digital, three-dimensional model of the landscape. They happily obliged, and soon after we began to talk about the residency.

I should also mention, however, that I have had a relationship to Mount Auburn since my childhood, when I was taken here by my mother. At the time she was studying landscape design. Mount Auburn was the perfect place to see a particularly beautiful and historical example of a built landscape, but also because of its variety of growth, to learn how to identify trees. I wish I still remembered all their Latin names!

I have returned to Mount Auburn at other periods of my life too, and for other reasons. I’ve walked the paths with friends on warm days. I’ve been drawn through the gates by historic names. I’ve brought visitors and new residents up Washington Tower to introduce them to the city, by pointing out its landscape and landmarks. And I’ve been here to mourn.

To my mind, the landscape of Mount Auburn creates an endless series of moments. Moving from one to another, and then another, always makes me feel as if I am being told a story. The narrative is sometimes about history, sometimes about the people buried here, and sometimes simply about how the light changes over the course of the day. So…I don’t have a favorite place here, but I do have a favorite way of moving through it.

What excites you about being Artist-in-Residence at Mount Auburn?

I enjoy making work in response to a site, or to the specific nature of an institution. Mount Auburn provided not only those two combined, but also the special aspect of it being of unparalleled historical importance, along with an archive in which that history is kept.

In the short time I have been here, I can easily say that the most exciting aspect has been engaging with the helpful, dynamic, and committed community of people who work here.

What are the first things you are going to do as artist-in-residence?