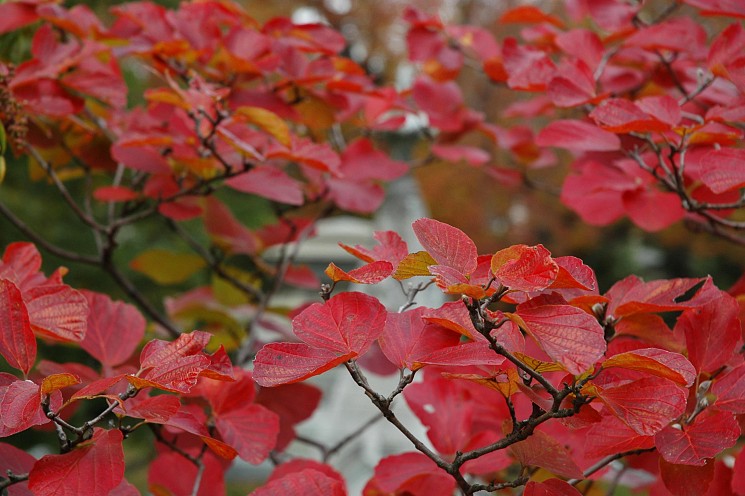 Fothergilla major, or large fothergilla, is an upright multiple-stemmed deciduous shrub that normally grows to about 6 feet in height although some may be slightly taller.  Native to the southeastern U. S. it is perfectly cold hardy (USDA Zones 5-8) during Mount Auburn’s winters.

Before the leaves appear in the spring, Fothergilla has sweetly fragrant white flowers with 12 to 32 stamens (no petals) forming an interesting bottle-brush shape that cover the shrub and may be as much as three inches long. Between 1765 and 1773 Linnaeus’ correspondence shows that he initially believed this to be a common witch hazel (Hamamelis virginiana) to which the leaves are very similar in size and shape.  Eventually he determined it was a then new genus Fothergilla although it is in the same botanical family as witch hazels, Hamamelidaceae. The genus name honors Dr.  John Fothergill (1712-1780), a Quaker physician and philanthropist of London who maintained a life-long interest in natural history and maintained an extensive garden and greenhouse where he grew plants from around the world. For the home landscape fothergilla is attractive enough to perform as a specimen planting or to be included in a shrub border where a tall hedge or screen effect is desired.  For those wishing to help reduce the numbers of invasive plants in our area we recommend this as an alternative to the heretofore far too frequently planted burning bush (Euonymus alatus) which, although it has brilliant red autumn foliage color, is now included on the Massachusetts voluntary do not plant list.

*This Horticulture Highlight was originally published in the October 2009 issue of the Friends of Mount Auburn electronic newsletter.