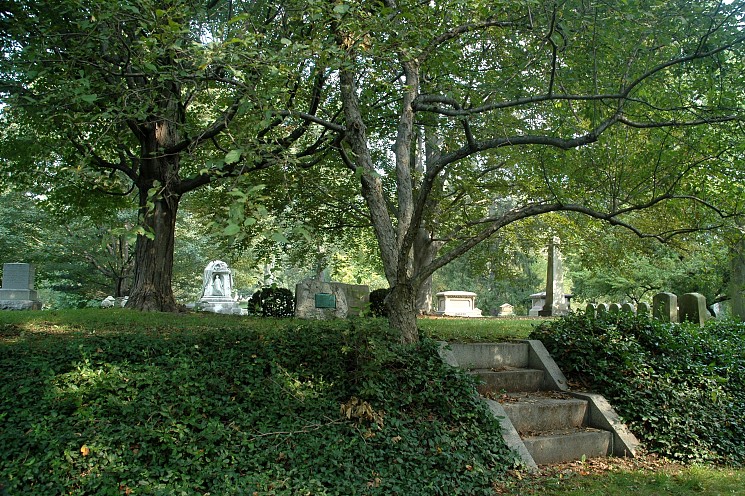 Mount Auburn was founded in 1831 as the nation’s first rural cemetery and an experimental garden. Designed as a natural setting for the burial of the dead and inspiration to the living, the Cemetery today continues as “a place to bury and commemorate the dead in surroundings of exceptional natural beauty that provide comfort and inspiration to the bereaved and the public.”

Conservation of Resources
Prior to Mount Auburn’s founding, George Brimmer was the owner of the land that was to become Mount Auburn. According to Jacob Bigelow, “[Brimmer’s] just appreciation of the beautiful in nature had prompted him to preserve from destruction the trees and other natural features of that attractive spot.”  By offering to sell his land to the Cemetery founders at cost, Brimmer was aware that the natural beauty of the site would be protected forever.  Brimmer’s original 72 acres, much of it in Watertown, MA, has today grown to 175 acres. Today’s green burial movement is propelled by individuals who, like Brimmer, want to protect beautiful land from development.

Restoration or Preservation of Habitat
Fifteen acres of land encircled by Walnut, Magnolia, Poplar, and Chestnut Avenues comprise Mount Auburn’s historic core, which includes Consecration Dell and Washington Tower. The steep slopes surrounding the Dell’s vernal pool have been restored with native plants, and the Tower now rises from a magnificent wildflower meadow. In addition to enhancing the natural beauty of the landscape, these restoration initiatives help the bountiful and diverse wildlife habitat for birds, reptiles, amphibians, and mammals. An urban oasis, the Cemetery continues to “… provide comfort and inspiration to the bereaved and the public.” Reduction of Greenhouse Gas Emissions
Whether choosing to have your body wrapped in a shroud and buried, or cremated in order to take up less space upon burial, the debate is still very much ongoing as to which method has the smaller carbon footprint. Cremation, fueled by natural gas, releases greenhouse gases of carbon dioxide, methane, nitrous oxide, and other pollutants into the air. Body burials, on the other hand, also have an associated carbon footprint. Decomposition of a body releases methane, a greenhouse gas more potent than carbon dioxide. Although it’s not state law, most cemeteries require concrete liners or burial vaults to prevent sunken graves, which naturally occur with decomposition of the body. Liners also prevent graves from collapsing under the weight of heavy equipment like backhoes. The raw materials and energy it takes to manufacture and ship these liners also has an associated carbon footprint.

There are still grave spaces available for sale at Mount Auburn where concrete liners are not required. Some of those spaces are between older family lots where room for memorialization options may be limited. The burial space, however, is dedicated to one’s remains – either a body wrapped in a shroud or in simple plain casket, or cremated remains poured into the soil – forever.

*  Casket, shroud or cremation burials without the use of concrete liner boxes or vaults

*  memorialization options include markers in turf or other groundcover, a small label on a nearby tree or shrub, or no marking at all.

Much like the ‘green burial’ proponents of today, Bigelow asked in 1831:

“What possible use is a resistance to the laws of nature? … [I]f some memorial is necessary to soothe the unsatisfied want, which we feel when bereaved of their presence, it must be found in contemplating the place in which we know that their dust is hidden.”

How comforting to know that place is Mount Auburn.