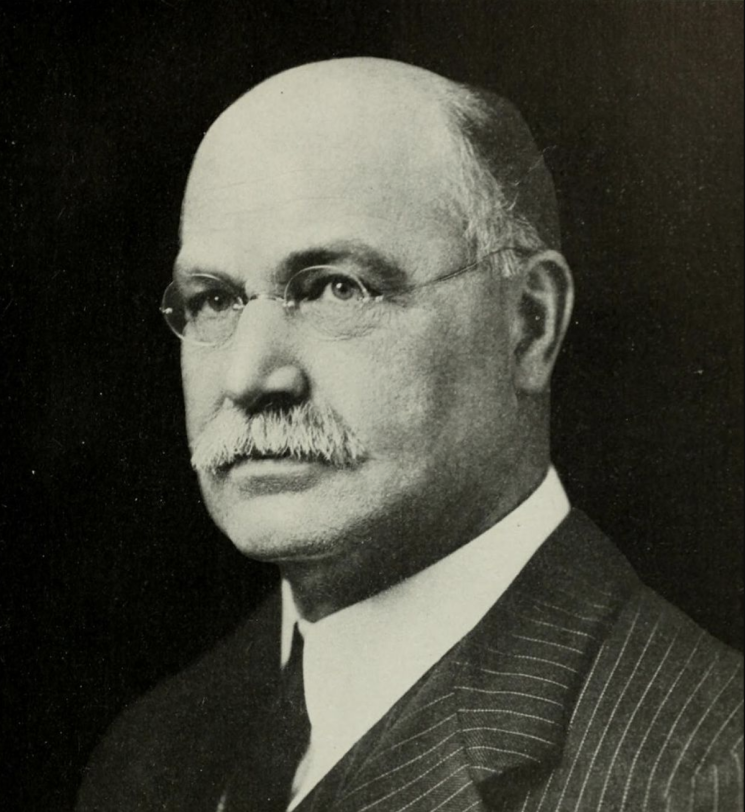 Known as one of the country’s leading economists, Frank William Taussig was born on December 28, 1859.

Born in St. Louis, Missouri, Taussig’s parents raised him to appreciate education and culture, specifically literature, art and music. His father, who emigrated to the U.S. from Prague, was a noted physician and part-time businessman.  It was his father’s enterprises in the business world of St. Louis that would ultimately inspire Frank’s career. After attending public schools in St. Louis, Taussig enrolled at the University of Washington in St. Louis in 1874. After one year of studies, he transferred to Harvard University. At Harvard, Taussig excelled in his studies and was a member of the crew and baseball teams. After graduating with honors in 1879, he spent a year traveling through Europe and studying economics at the University of Berlin.

In 1880 Taussig returned to Cambridge and enrolled in graduate programs in both law and economics at Harvard. While in graduate school, Taussig served as secretary to Harvard president Charles W. Eliot. In 1882 he began teaching at Harvard as an instructor of political economy. The following year, Taussig received his Ph.D. in economics and published a book based on his dissertation, Protection to Young Industries as Applied in the United States. Taussig continued to teach at Harvard while finishing his studies in law.  He received his law degree in 1886, although he chose to never practice. The same year, Taussig was promoted to assistant professor of political economy and in 1892 he was made a full professor.

In 1888 Taussig married Edith Thomas Guild. The couple had four children, including Helen Brooke Taussig, a noted pediatrician and cardiologist. In the same year that he married, Taussig published his second book, The Tariff History of the United Sates. This book, the standard work on the issue of tariffs for many years, was reissued in seven subsequent editions and made Taussig the leading expert on the issue of tariffs in the U.S. In 1896 Taussig published his third work, Wages and Capital, a theoretical study that remained influential for many years. In 1896 Taussig also assumed the editorship of the Quarterly Journal of Economics. As editor of the journal for over four decades (1896 – 1937) Taussig, more than any other individual during that time, helped to shape the development of economic thought in America.

In 1904 he served as president of the American Economic Association and in 1906 he began an effort that lead to the founding of the Harvard Graduate School of Business Administration. In 1910, Taussig’s wife, Edith, died at the age of 48.  Eight years later, Taussig married Laura Fisher. In 1911 Taussig published the textbook Principles of Economics. This text was adopted by many American colleges and universities and was also widely read in England. Like his earlier work on tariffs, Principles of Economics was reprinted in several editions and cemented Taussig’s place in the nucleus of economic thought in this country. After the publication of his textbook, Taussig conducted a series of lectures at Brown University that were later published as a book titled Inventors and Money-Makers (1915).

Taussig took a three-year leave of absence from Harvard starting in 1917 to serve as the first chairman of the newly created U.S. Tariff Commission, a position appointed by President Wilson. Prior to his appointment, Taussig had served as Wilson’s informal economic advisor. As the first chairman of the commission, Taussig helped to establish a functioning agency, staffed with highly qualified analysts. In 1919 Taussig resigned his position as chairman of the Tariff Commission to accompany President Wilson to the Versailles Peace Conference at the end of World War I. At the conference, Taussig functioned as an official economic advisor, serving on several committees and drafting several of the economic provisions in the resulting Versailles Treaty. He returned to Harvard in 1920 but continued to serve as a presidential advisor until Wilson left office in 1921.

After returning to Harvard, Taussig devoted the rest of his life to teaching, research, writing and the editing of the Quarterly Journal of Economics. His later writings included International Trade (1927), considered by economic historians to be the first important work in the field, and American Business Leaders: A Study in Social Origins and Social Stratification (1932). Taussig retired from Harvard as professor emeritus in 1935. In 1937 he retired as editor of the Quarterly Journal. In 1939 Taussig’s final revision of his Principles of Economics was published.

Frank William Taussig is buried at Mount Auburn in Lot 1520 on Columbine Path.