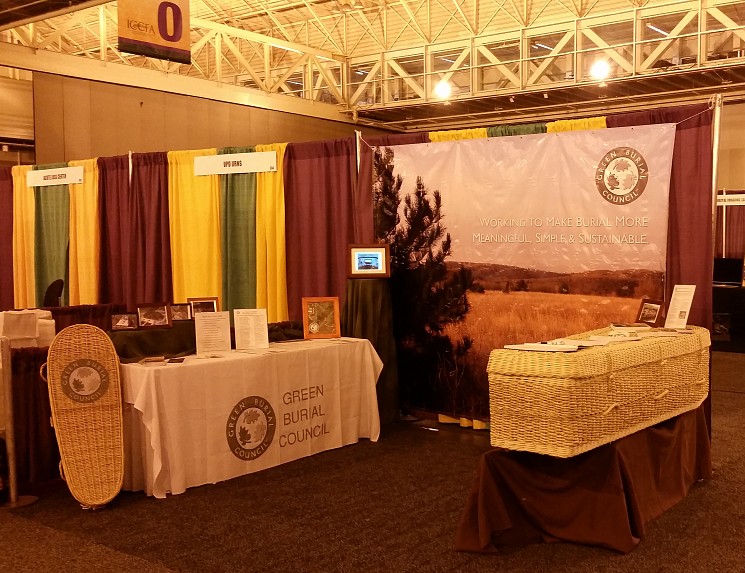 Ten years ago, the Green Burial Council (GBC) was founded.  The GBC certifies cemeteries, funeral homes and products ensuring that when you read about or purchase a product that is GBC-certified, you can be assured that it has been independently vetted by a third party certification body.  Back in 2005, the people promoting green burials were considered crazy.  Green burial was considered merely a fad by most attendees at the convention of the International Cemetery, Cremation and Funeral Association (ICCFA).  The first few years in which the GBC held exhibits at the ICCFA convention the ‘green’ section was separated from the ‘conventional’ section in much the same way a grocer may separate organically-grown from conventionally-grown produce.  Today, the juxtaposition of organic cotton shrouds and Amish-built wooden carts next to highly polished caskets and hearses is a real lesson in the options available to everyone. This year’s ICCFA convention even included the ‘mushroom suit.’

From April 13 – 16, the GBC executive director and board members staffed a perfectly located booth on the ICCFA convention floor in New Orleans, Louisiana. A constant stream of visitors stopped by to say they either were or wanted to become a member of the GBC.  What a success!  Also, the GBC sponsored three unique presentations in a ‘green track,’ which was part of the mainstream program.  What a difference a decade makes!

The three green burial presentations were about 1) body preparation, 2) education of cemetery staff and families, and 3) creation of a green cemetery at West Laurel Hill in Bala Cynwyd, Pennsylvania.  The magic of Techni-ice and waxed paper: What funeral directors need to know about green burial preparation, was about body preparation for a green funeral and subsequent burial presented by Bob Fertig, a funeral director and GBC director based in NJ; and GBC president Ed Bixby and owner of Steelmantown Cemetery Preserve in NJ.  This information is not taught in a typical mortuary program and was well attended by close to 100 people.  The second presentation, When the body arrives in a Prius: What cemetery staff need to know about green burial families, presented by Lee Webster and myself (both GBC directors), was about the education process and guidelines that need to be put into place for families who wish to take care of their loved one at home and for the cemeterians who will be doing the interment without the aid of a funeral director. Both of these situations are legal in Massachusetts and for the most part across the nation. So far, Mount Auburn’s experience has shown that “blended funerals” are common, in which a funeral director is hired to prepare necessary paperwork and transport the body to the cemetery, but their services to embalm are not used.  The third talk, Green design & innovation: Restoration ecology in the hybrid cemetery described a strategy where green burial assists in the process of ecological succession.  With careful intervention, the cemetery staff at West Laurel Hill will assist the development of a woodland from its current state as a wildflower meadow into a complex forest environment where perpetual care will be carried out by nature and its forest community of plants, trees and animals.

Mount Auburn Cemetery was certified by the Green Burial Council in the spring of 2014 as a hybrid cemetery where grave liners or vaults are required in some locations, but in others throughout the historic core, grave liners are prohibited.  As of April 2016, 39 natural burial graves have been sold, and eight people have been interred.  Natural graves in one section on Rhodora Path that overlooks Auburn Lake are still available.