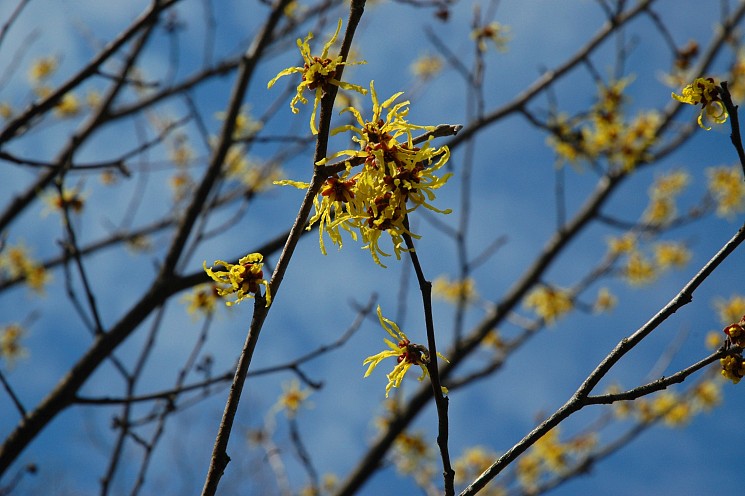 Gardener, if you listen, listen well:
Plant for your winter pleasure, when the months
Dishearten; plant to find a fragile note
Touched from the brittle violin of frost.
– Vita Sackville-West

The genus Hamamelis, the witch hazels, provide us with a radiant note of flowers that go hand in hand with frost. Once described as weird, arachnoidal and conspicuous they provide brightness and fragrance even while snow is still falling on these lingering desolate days of our winter landscape.

A preponderance of botanists currently accept four naturally occurring species.  All are deciduous shrubs or small trees with similar appearing flowers, fruits and seeds. These four species are equally divided upon two continents – Hamamelis mollis and Hamamelis japonica from Asia, while Hamamelis virginiana and Hamamelis vernalis are North American natives. Hamamelis mollis, Chinese witch hazel, has been flowering in our landscape for two weeks already, through several snow storms, and the flowers may persist for at least another three weeks. Each yellow flower has four strap-shaped petals, approximately 5/8″ long and 1/16″ wide. When several flowers occur close together there is an appearance of small yellow tassels ornamenting the leafless stem. Yet there are no other tassels which emit such a clean, deliciously intoxicating scent. When the weather turns severely cold these petals “curl-up” and later unfurl as the temperature warms, an adaptation that allows them to persist for such a prolonged period of weeks at the end of winter.

Later in spring when the leaves are fully formed they are 3-6″ long, roundish but with an apex tapering to a point. The top and bottom of the leaf surfaces are both pubescent hence the Latin name mollis which means soft. In autumn these leaves provide an outstanding yellow display.

Hamamelis japonica, Japanese witch hazel, exhibits minor differences; each flower petal is slightly narrower in width and a has a wrinkled or crinkled form, is a bit less fragrant, blooms a bit later in March and April and has leaves that are not so soft to the touch yet still provide notable fall color. Hamamelis vernalis, vernal witch hazel, flowers fragrantly for three to four weeks often beginning in January and its leaves also provide good fall color. Hamamelis virginiana, common  witch hazel, unlike the previous three species flowers in October and November at the same time its leaves are turning gold so the dainty floriferous effect is lost in the fall foliage. The bark of this plant is the source of the witch hazel liquid found in many a home medicine cabinet that has long been produced in neighboring Connecticut.

By crossing two different parents Hamamelis mollis and Hamamelis japonica a notable hybrid has resulted which is referred to as Hamamelis x intermedia. Primarily from this hybrid and the four species discussed there are now 125 cultivated varieties offering flower colors of many hues of yellow, red, maroon, and orange along with varying growth habits and sizes. One sentimental favorite cultivar is Hamamelis x intermedia ‘Arnold Promise’, which has abundant bright yellow, stiffly drooping, slightly fragrant flowers from late February/early March into April. The reliable autumn foliage also can be spectacular with polychromatic banding of scarlet, gold and green on individual leaves massed upon the plant. But at this time of year its promise is the promise of spring. As the great horticulturist Donald Wyman (1904-1993) said of this plant, “…an old friend, known for its performance…”

In the coming weeks you can find Hamamelis x intermedia ‘Arnold Promise’ blooming here at Spruce Knoll, Narcissus Path, and Heath Path. Other witch hazels are blooming on Story Road, Bigelow Ave, Spelman Road and other locations throughout the landscape.

*This Horticulture Highlight was originally published in the March 2010 issue of the Friends of Mount Auburn electronic newsletter.