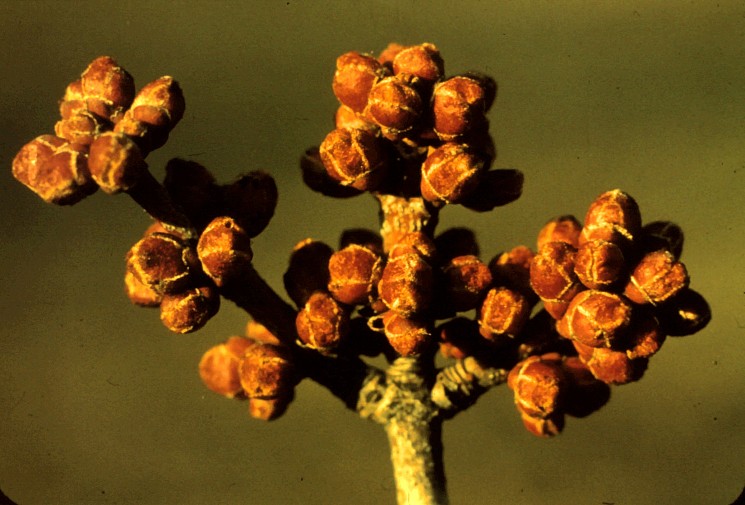 From the earth’s loosened mould
The sapling draws its sustenance, and thrives;
Though stricken to the heart with winter’s cold,
The drooping tree revives.

Signs of spring’s figurative and literal revival are the early flowers found on our native Red Maple, Acer rubrum. While some, but certainly not all, of these trees, may have glorious red fall foliage, it is more probable that the common name relies on the annual occurrence of dense clusters of the small, red, flowers, appearing before the leaves.  There are two distinct forms of flowers, the male and female, mostly found on separate trees, each including five small, inconspicuous, sepals and petals. Visible upon closer observation, the male flowers, have numerous stamens, composed of whitish, or yellow, erect stalks (filaments), topped by darkish-brown anthers, which produce the pollen.  Contrast these with the female flowers, having not stamens, but red, curved, antennae-like stigmas. When successfully pollinated, and fertilized, these female flowers will develop tiny pairs of winged seeds (samaras).  Often initially bright red, maturing to brown by June, these twin seeds each are attached to thin, papery, ¾ to 1-inch long wings. These wings will later help twirl away the seeds (some refer to them as maple keys), from the parent tree, a fine example of wind dispersal of seeds.

These pre-leaf flowers provide a colorful, annual, promise of spring.  An excerpt from the 1906 Journal of Henry David Thoreau (1817-1862) remains timelessly appropriate, “A spreading red maple in bloom, seen against a favorable background … is a very handsome object, presenting not a dense mass of color but an open, graceful and ethereal top of light crimson or scarlet, not too obvious and staring, slightly tingeing the landscape as becomes the season- a veil of rich workmanship and high color against the sky, or water, or other trees.”  This ethereal, red hued, canopy is time-stretched along the calendar, with the female trees, as the young samaras also are brilliantly red, as well as delicious to various forms of wildlife. Again we excerpt from Thoreau’s Journal, for May 13, 1858, “…I saw a red squirrel steal slyly up a red maple, as if he were in search of a bird’s nest (though it is early for most)… he crept far out on the slender branches and, reaching out his neck, nibbled off and … voraciously devoured the half-grown keys, using his paws to direct them into his mouth… Bunch after bunch, he plucked and ate … the whole tree hanging red … all glowing and transparent by the sun.” Numerous species of birds, from nuthatches and finches, to turkeys, also feed avidly on these seeds.

Red Maples grow from Nova Scotia, west to Manitoba and Minnesota, and south to Texas and Florida, the most common native tree in eastern North America. Within such a large geographic range, it is variously known as scarlet maple, swamp maple, water maple, soft maple, and white maple. At maturity, it is 40 to 60 feet tall, with a somewhat rounded-shaped crown.  The opposite, simple, leaves are 2 to 6-inches long, and nearly as broad. They generally have three (sometimes five) pointed lobes. These leaves provide food for larvae for countless species of moths and butterflies, including the orange-humped mapleworm, and the Baltimore hypena, as well as for many other insect families. In autumn, there is a second season of ornamental interest, as these leaves may transform into outstanding colorful shades of yellow, pink, crimson, and even purple.

For New Englanders, autumn thoughts of maples, usually conjure images of Sugar Maple, Acer saccharum. There is a good chance though, that while admiring spectacular autumn foliage, many people could actually be enjoying a more underrated New England native, Red Maple, Acer rubrum. We allow a parting encomium to Ernest Henry Wilson (1876-1930), outstanding plantsman, plant collector, and author. As cited in Sheila Connor’s, New England Natives, “Although Wilson introduced many outstanding exotic ornamental trees to American gardens, when asked by Richardson Wright, the editor of House & Garden, to list his ten favorite trees, his first choice was the native red maple.”