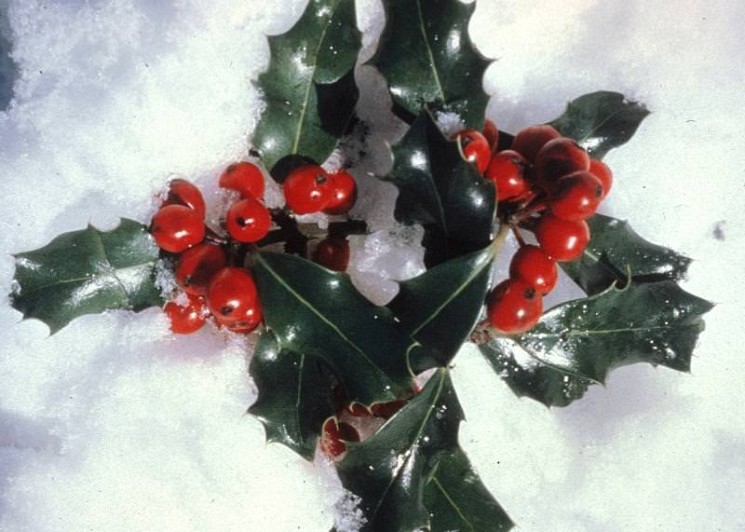 Love is like the wild rose-briar,
Love is like the wild rose-briar,
Friendship like the holly-tree-
The holly is dark when the rose-briar blooms
But which will bloom most constantly?
The wild-rose briar is sweet in spring,
Its summer blossoms scent the air;
Yet wait till winter comes again
And who will call the wild-briar fair?
Then scorn the silly rose-wreath now
And deck thee with holly’s sheen,
That when December blights thy brow
He still may leave thy garland green.

Many holiday season decorations, especially wreaths, include the leaves and fruit of Ilex opaca, American holly. Ilex opaca, native to the eastern United States, may reach 40 to 50 feet tall in its southern range, but in Massachusetts it is more often a smaller tree, 20 to 30 feet tall, with stiff evergreen leaves. The leaves, 1 ½ to 3 ½-inches long, have several sharp spine-like points along the margin. The leaves remain on branches for two to three years before being replaced by newer leaves. The name opaca means opaque or shaded, and refers to the duller sheen of the leaves and fruit compared to the English holly,Ilex aquifolium.

Mount Auburn’s visionary founder, Jacob Bigelow (1787-1879), in his classic 1814 book, Florula Bostoniensis, provided this description of Ilex opaca: “This tree is more interesting, from being one of the few evergreen trees, which we possess, that are not of the coniferous tribe. Its leaves are tough, smooth, and shining, furnished at the edge with short, rigid, acute spines. The flowers are numerous, small, of a greenish white, growing in bunches around the branches. Berries red, falling very late. – Quincy, Cohasset.”  Bigelow reminds us that not all evergreens are conifers (and we add, not all conifers are evergreen).

The genus Ilex includes over 400 species worldwide, with some authorities believing the number is twice that high. Most are evergreen, but 30 species are deciduous. These occur in temperate, subtropical, and tropical climatic zones as trees, shrubs, or vines, all members of the family AQUIFOLIACEAE. Nearly all members of this family are dioecious plants, meaning that male and female flowers occur on different plants. The small, whitish flowers of female trees of American holly, if successfully pollinated by bees, wasps, ants, or other insects, produce fruits that are red, roundish, and 1/3 inch across.  They ripen in October and persist on the trees well into the winter. The fruits are initially hard, but soften after being frozen, and then provide important winter food for mockingbirds, cardinals, mourning doves, robins, turkeys, and other birds. The dense, spiny, evergreen leaves also provide year-round protection for many species of birds.

Fred C. Galle in his 1997 book, Hollies: The Genus Ilex, recounts Native American uses: “Native Americans of Pennsylvania regarded the holly as their ‘Red Badge of Courage’ and the token of success in battle…The preserved berries were used as decorative buttons on vests, sleeves, trousers, and in their hair…The spines of the leaves symbolized the fierceness of the warriors…the toughness of the wood indicated they would never submit to their enemies.”

Galle also recounts early colonial symbolism: “Among the old Pennsylvania Dutch, the holly berry represented the blood of Christ issuing from His wounds, and the white flowers of the holly tree were symbolic of the purity in which He was conceived.” Many other authors have described the use of American holly within colonial gardens, starting in the early 1700’s. George Washington (1732-1799) and Thomas Jefferson (1743-1826), each made several mentions of planting these trees at their respective properties. American holly was among the many North American arboreal treasures shared with European gardeners; it was being cultivated in England as early as 1744.