…I am adorned in the russet-brown message

the soul brings from its coming-to-be… November brings a continuation of our colorful autumn foliage even as some earlier brilliantly colored maples, dogwoods and others have now shed their leaves. Dawn redwood, Metasequoia glyptostroboides elegantly enhances its growing space throughout the calendar year, but the rich, changeable autumn color, yellow-brown, apricot, russet-brown, causes many people to stop, pause, and ponder, “What is that tree?”

That may have been a similar thought occurring to several different Chinese foresters and forestry professors seventy-to-seventy-five years-ago. In that relatively brief space of time, honest excitement was generated in the international spheres of forestry, botany and horticulture, as this formerly unrecorded genus actually amazed some in the scientific world. Even our Boston newspapers would ultimately include headlines such as, “Extinct Tree Yields Seeds for America” and “Fossil Tree Found Alive.”

The story began in 1941 when Shigeru Miki (1903-1974), a Japanese paleobotanist established, through peer-review publication, a new genus from his studies of five million year-old fossils. Discounting these Pliocene remains as neither Taxodium (bald cypress) or Sequoia (coast redwood), Miki’s research established the new genus Metasequoia, by combining Greek meta, meaning “akin to,” and Sequoia. Coincidentally, soon thereafter a Chinese forester traveling in outlying, eastern Sichuan Province observed what would turn out to be living examples of Miki’s fossil-identified Metasequoia. A sequence of remote area field collections, initial misidentifications, further field collections, involvement of expert Chinese dendrologists and taxonomists followed. This all would eventually result with Harvard University’s Arnold Arboretum, among other U. S., Chinese, European and Indian governmental and/or botanical institutions, receiving, distributing and planting seeds of Metasequoia beginning in 1948. Several initial field identifications had mistaken this for another genus Glyptostrobus, Chinese swamp cypress, this helped lead to its later incorporation in the botanical name Metasequoia glyptostroboides. This tree’s common name Dawn redwood alluded to its early fossil record. A more thorough accounting of the people and places involved in this fascinating botanical discovery is found in Stephen Spongbergs’s entertainingly informative A Reunion of Trees. As one of the four genera of deciduous conifers growing within our living collection (Larix, Pseudolarix and Taxodium are the others), Dawn redwood, Metasequoia glyptostroboides adds greatly to the impressionistic coloring annually enhancing our beautiful, timeless landscape. Yet the passing of its autumn foliage reveals more than the approach of winter. It’s strongly pyramidal-shaped framework of branches upon closer view displays an attractive orange-brown, slightly shaggy bark. Maturing decades-old specimens develop a trunk with a wide flaring base, occasionally horizontally elongated at ground-level when growing adjacent to water.  Additionally, a curious visual delight is the trunk’s sinuous curves with shallow-to-deep furrows, almost as if drawn by a master Chinese artist. Winter snowfall only enhances this characteristic. an evergreen (it, looks) that isn’t.

What kind of tree is that?

I love to see it resurrect itself, the enfolded

buttons of needles studding the branches,

then opening into little bursts… Each spring brings the emergence of a new season of leaves throughout the tree, as with all of our other deciduous plants. Dawn redwood leaves are initially bright green, 3/4-inch-long, 1/16-inch-wide placed opposite each other along short twiglets in what botanists refer to as pectinate arrangement (comb-like). These soft-to-the-touch fernlike twiglets of leaves droop pendulously providing an overall delicate, feathery appearance. …But will they care

about my favorite color,

or my habit of searching myself… The seed bearing female cones are 3/4-inch-to-1-inch long and wide, beginning green and ripening to brown in one growing season. The multiple tan-colored, roundish, flat, seeds which spill out as the cones’ scales separate apart, are about the size of hot pepper flakes some of us shake onto a luncheon slice of pizza. Yet these tiny seeds have successfully perpetuated this genus for over 100-million years. The male, pollen producing strobili (flower) appear unopened in late summer, clustered three-to-six-inch-long catkin-like and persist throughout the winter, giving the naked branches a tasseled look, until shedding their pollen in the spring. Although today only native to a small range of eastern Szechuan and western Hupeh, China Metasequoia-like fossils have been reported from parts of China, Japan, Greenland, U.S., Canada and Russia. For millions of years they were abundant in western, northern and arctic North America. One notable find was on the Arctic Ocean’s Axel Heiberg Island exhibiting remains of a fossilized Metasequoia forest. On your next visit to Mount Auburn look for our over twenty Dawn redwoods growing around Halcyon Lake, Willow Pond, on Spelman Road, Pilgrim Path, and at the greenhouse garden. Contemplate their pre-history origins, including when dinosaurs roamed the earth.

…But the trees I planted

The songs I sang

Will still be sung 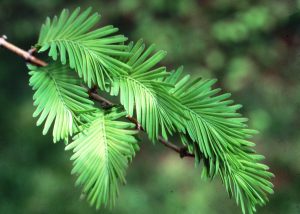 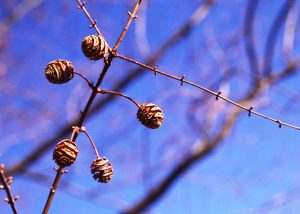 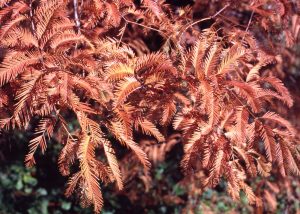 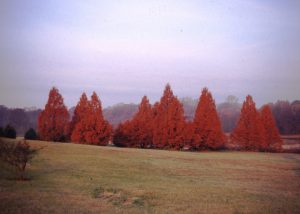 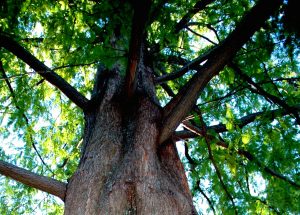 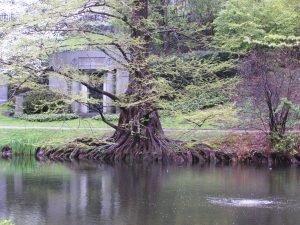 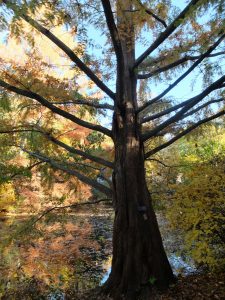 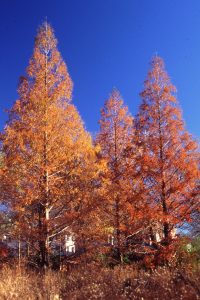 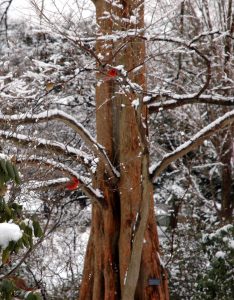