Pokin’ round ‘mid ferns and mosses,

Where my heart would elsewhere fail.

Fossils indicate that ferns have existed for over 400 million years. Today worldwide there are identified more than 11,000 species, in 300 genera and 33 families.  Among the most widespread forms of all plant life, they grow on every continent, in soil, on rocks, in trees, in deserts, as well as rainforests.  They are also unique in having the greatest size variation of any form of plant life, from less than the size of your thumbnail, to 60-foot tall tree-ferns. Ferns were the first plants with a vascular system, allowing water and nutrients to be conducted from the soil, through the roots, and stem, to the leaves. Ferns reproduce without flowers or seeds, but rather through spores released into the air. 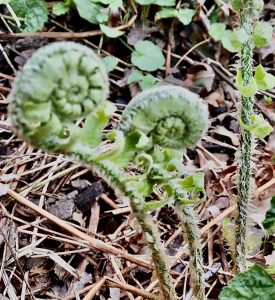 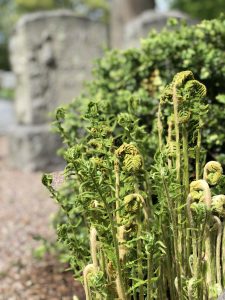 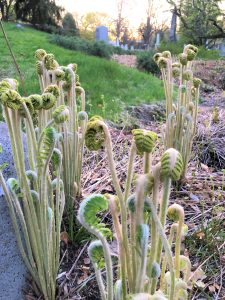 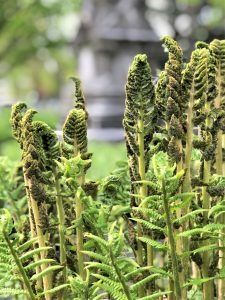 A few useful terms; frond is the whole fern leaf, both blade and stalk, blade is the leafy part of the frond, stipe is the stem of the frond below the blade, rachis is the portion of the stipe extending into the leaf blade, pinnae are the leaflets which may be lobed, or completely separated from each other, when the latter, the separate lobes are referred to as pinnules, and fiddlehead is the unfurling frond of any fern.

Ferns with a seeming delicate structure, adding to their lingering loveliness, are found throughout our landscape. Many are planted in the shade of Consecration Dell, others are combined with perennials and/or shrubs, and some are planted in sweeps within beds.  All provide visual texture. The following are ten, of the over two-dozen, different species of ferns growing here. One of our most conspicuous native New England ferns, Ostrich fern, Matteuccia struthiopteris, gets its name from its graceful, long, arching, lyre-shaped fronds, resembling an ostrich plume.  The fronds are widest above their mid-length, and the stipe (stalk) has a deep groove.  It is one of the few edible ferns, its fiddleheads, which may be cut and prepared like asparagus, are harvested in early spring each year. The Sensitive fern, Onoclea sensibilis is un-fern like in appearance with its pale-green fronds that are broadly triangular, deeply lobed, and wavy-edged. The pinnae have a soft, plush-like texture, and are known to die back with the first frost. You will find these on Lawn Ave., Rosebay Ave., and other locations. Royal fern, Osmunda regalis has leaves that resemble a black locust tree (Robinia pseudoacacia) and is often found in wet, swampy areas. The unusual clustering of spore-borne fertile pinnae, at the top of those fronds, reminds some of the floral shape of a sunflower or astilbe. Creating a vase form, 4-feet tall, these rich green fronds turn to a soft yellow in autumn. Look for this in Consecration Dell. Hay-scented fern, Dennstaedtia punctilobulata has chartreuse-colored, lacy fronds, that grow singly, to about knee-high, and seem to align themselves to face the sun. This is one of the most common native ferns in New England, helped by the facts that it can grow in full sun (as well as dry shade), and it is not on the white-tailed deer’s menu.  The soft fronds, squeezed between your fingers, feel slightly sticky, due to tiny white glandular hairs (look for them with a hand lens). Some, but not all, claim this fern to be hay-scented. These are growing in Consecration Dell, and numerous other locations. Cinnamon fern, Osmunda cinnamomea takes its name not from fragrance, but from the cinnamon-colored hairs found covering its stipes, the axils of its pinnae at the rachis, and on the distinctly upright, mature, fertile fronds. Appreciated by birds, this “fern wool” or “fern cotton” is used by warblers, creepers, and other smaller birds in felting their nests. This fern grows in vase-like clusters, with each frond widest at, or just below the middle.  In early spring, its emerging fiddleheads are covered with a dense, white pubescence.   You will also find these in Consecration Dell. Bracken fern, Pteridium aquilinum may form large, dense stands, even hip-high.  It grows luxuriantly (some would say weedy) on several continents. The distinctive three-parted blades are highly dissected, and have a leathery feel.  Historically, this was widely used for food, clothing, and shelter. Some Asian cultures ate the fiddleheads, although current medical knowledge strongly advises against this. Bracken fibers have been popular for weaving cloth, and various parts of the plant have been used as a dye. The dried stalks, bound together were used as thatch for rural cottages. You will find these between Asa Gray Garden and Bigelow Chapel, and other locations. The New York fern, Thelypteris noveboracensis is native throughout eastern United States and Canada, despite the name.   It grows in clumps of three or more fronds, each with a dark brown stipe. A more notable characteristic is that its diamond-shaped, fronds taper gradually at both top and bottom, with the lowest pinnae being very small. This notable double taper has been said to be like New Yorkers who “burn the candle at both ends.” You will find this on Oak Ave. Northern maidenhair fern, Adiantum pedatum is a smaller fern, with a delicate, distinctive shape. Its thin black stipe divides into two arching, circular fans of fronds. Its light-green pinnules, which undulate in the slightest breeze, often have a ginkgo-shaped terminal pinnule. You will find these in Spruce Knoll. Japanese painted fern, Athyrium niponicum ‘Pictum’ is one of the prettiest exotic species. It has a gray-green, shading to silver, tapered blade with contrasting wine-red rachis.  Although perhaps only a foot tall, this is a fern that when used with perennials, creates numerous lovely plant-combinations. You will find these on Pearl Ave., among other locations. Christmas fern, Polystichum acrostichoideshas rich, deep-green,, evergreen fronds, leathery to the touch. This is a clumping fern, adaptable to either moist or dryish sites.  It may become  a prostrate evergreen  mat in winter.  These will be found in Birch Gardens, Consecration Dell, and other locations. On your next visit, stop and take a closer look at the many uncommonly lovely ferns enhancing our landscape. “I bring you a Fern from my own Forest – where I play every Day.”  -Emily Dickinson in the chill twilight

face down hearing our breaths

full of the horizon

and the smell of the dew

on the cold ferns… finger by finger in the

hands reach out to touch the heat,

to tap gently on still air.

An infant on a blanket

nearby tries to raise her head,

which wobbles slightly on its

a fern frond in a rare breeze,

as the baby stretches up,

into this warm, green-laced world.

Her brother, aged two, squats by

the edge of the fern garden,

clearly trying to tell his

patient mother about the ferns,

their wavy fingers, the sun

and the worm he saw wiggling

around in the rich black earth.

The old woman sitting on

a bench close by watches them.

She sees the ferns uncurl their

fists, the baby lift her head,

the toddler exploring, and rejoices

that, even in her final years,

she can witness once more life’s