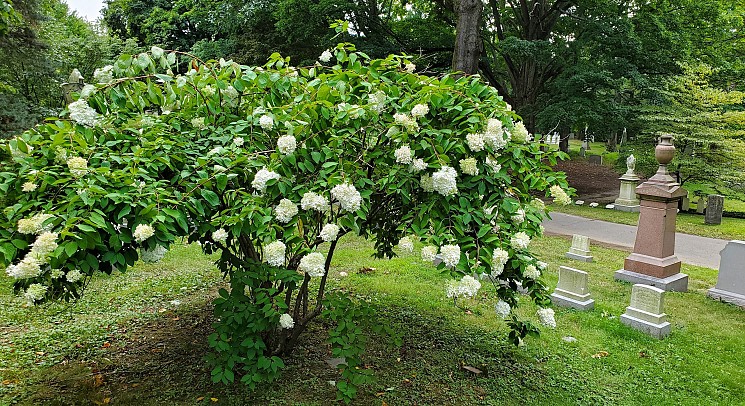 It was late in September when you took me

To that amazing garden, hidden in the city,

Tranquil and complicated as an open hand, …

For many of us, September, with its return of school-days, has become a de facto end of summer.  One late-blooming plant, that always extends the lushness of summer flowers, well past Labor Day, is the Panicle Hydrangea, Hydrangea paniculata.

The genus Hydrangea, within the family HYDRANGEACEAE, includes over 70 species of flowering plants, native to south, and eastern Asia, and North, and South America. Hydrangeas are divided into three major groups of plants: vines; shrubs with the flower inflorescences as round, or conical clusters; and shrubs with flat-topped inflorescences. Hydrangea paniculata, with flowers in elongated, conical, terminal clusters, is native to China and Japan, and was introduced into western cultivation in 1861, by Philipp Franz von Siebold (1796-1866), German physician, and notable plant collector. Panicle Hydrangea is a plant with a variable habit, most often it is an upright shrub, 6-10’ high and wide, with arching branches. But, some may also develop into a small tree, 15-20’ tall. The simple, dark green, elliptic-shaped, leaves are 3-6 inches long. The leaves are opposite on the stem, although they can also be whorled in threes, on selected stems. There is minimal autumnal leaf color. The large, flower heads though, persist long into the calendar year.  These extravagant flower heads, actually clusters of many small flowers, have earned this plant long-standing adulation, and more recent horticultural merit: the Cary Award winner for 2010. Panicle Hydrangea flowers are composed of both sterile and fertile florets.  The smaller, yellowish-white, slightly fragrant, fertile flowers are most often hidden, within the outer, flamboyant, sterile, four-parted, florets. The whole terminal, 12-18”-long, cluster creates an eye-catching effect, often beginning in August, and then continuing well into September, and beyond. These sterile, white flowers often eventually turn greenish, then to pinkish-rose, tan, and finally brown.  Ultimately, these brown, dead flower panicles remain on the plant throughout the winter, adding dramatic contrast to the landscape.  These panicles also are frequently used for floral arrangements, as poet Ann Stevenson aptly captures,“… she considered, arranging them in a vase / with dry  grass and last summer’s hydrangeas / whose deadness was still (how to put it?) / alive, or maybe the other side of life. Two sides, really, of the same thing? …” There are now more than 50 cultivated varieties of Panicle Hydrangea introduced into the nursery trade. Hydrangea paniculata ‘Grandiflora’ (often called ‘Pee Gee’) remains perhaps the most common, and an old-fashioned favorite. We have a fine specimen of ‘Pee Gee’ Hydrangea on Mimosa Path, at Fir Avenue. On your next visit to Mount Auburn, look for other  cultivars of Panicle Hydrangeas on Beech Avenue, Oak Avenue, Flicker Path, Clethra Path, Privet Path, Halesia Path, Euonymus Path, Juniper Path, and Oleander Path.

Below are photos of some of the many kinds of Hydrangeas you might see in the month of September at Mount Auburn Cemetery!