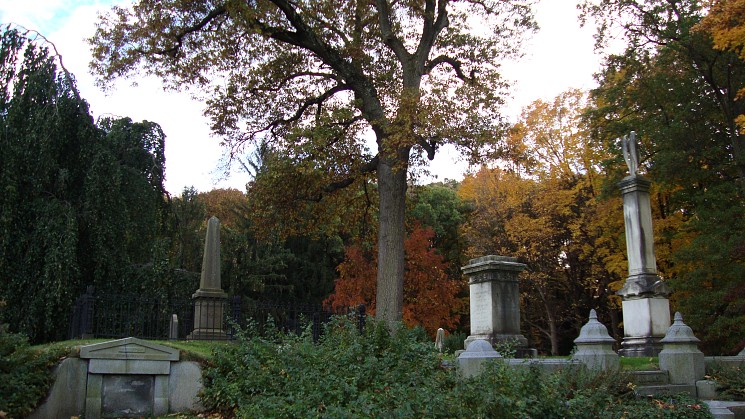 …And thou, majestic oak, from yon high place

This month we sing the praises of our Scarlet Oak, Quercus coccinea, which often will claim the autumnal stage, with bright, red, fall foliage from late-October, well into November.  This tree has a native range that extends from southern Maine to Georgia, and west to Michigan and Missouri.  Tolerant of dry, sandy, soil, this large, graceful tree was one of several North American oaks that floristically greeted, seventeenth-century European colonists, after their long, oceanic voyages.

The large genus Quercus, which is Latin for “oak tree”, includes over 400 species worldwide (60 U.S. species), of trees and shrubs, deciduous and evergreen, that are primarily native to the northern hemisphere. Oaks have a long cultural association, factual and mythological, with humankind, often symbolic of strength and endurance.  Many Greeks and Romans believed that oak was the first tree that grew upon the earth, and was the tree of Zeus, and/or Jupiter, their respective king of gods. In Norse mythology, the oak was associated with Thor, the god of thunder. In ancient Palestine, as well as today, there were, and are, native oaks, which led to Biblical references to this tree. In 2004, the United States declared the oak to be our national tree, joining at least a dozen other countries, which have also designated the oak as their national tree.

Our Scarlet Oak, Quercus coccinea, grows to be 60 to 75’ in height. The simple leaves are 3” to 6” long, with 7 bristle-tipped lobes.  The sinuses (space between lobes) are deep and often referred to as “C”-shaped. During most of the growing season, these leaves are a shiny green on top, with a paler green below. If you look closely, the underside of these leaves have tiny tufts of pubescence where the leaf veins meet the midrib. Later in the winter, oak trees, along with their botanical family member beeches, have a curious trait of retaining some of their dead, brown, leaves attached to the tree’s stem. This is referred to as marcescence, and is more frequently a juvenile trait, or observed on lower branches.

The inconspicuous springtime flowers of this (and other oaks) are separate sexed, but with both male and female, on each tree. The male flowers occur as yellow-green, catkins, a 3”-5”, pendulous stalk, with dozens of minute, wind-pollinated flowers that lack petals. Catkins are named for their resemblance to a miniature, cat’s tail. The less visible female flowers are found in a junction between a new leaf and the stem.  If successfully fertilized, the eventual fruit, the acorn of the Scarlet Oak, Quercus coccinea, will need about 18 months to fully mature. This nutlike fruit has evolved to attract various animals to assist with seed dispersal away from the original tree.  Acorns feed an array of life, from ants, to bears, to humans. Native Americans and colonial settlers harvested acorns for winter survival use.

Scarlet Oak, Quercus coccinea, in the eyes of some beholders, has considerable beauty at every season of the year. But in the autumn, when the whole Cemetery has changed its color, the rich scarlet that its leaves assume, make it an object of conspicuous beauty.

Of special note, we have three Scarlet Oaks, on Iris Path, Lime Avenue, and Fir Avenue, which pre-date the 1831 founding of Mount Auburn Cemetery. On your next visit here, look for these majestic monarchs, along with our other Scarlet Oaks on Central Avenue, Crystal Avenue, Elm Avenue, Viburnum Avenue, Pond Road, Meadow Road, Daphne Path, Hazel Dell Path, Narcissus Path, Petunia Path, Vine Path, and Curfew Path, among other locations.