How faithful are your branches…

Alaska yellow-cedar, Xanthocyparis nootkatensis, joins a list of botanically different types of plants loosely given the common name cedar (western red cedar, Atlantic white cedar, red cedar, incense cedar, Japanese cedar, salt cedar, ground cedar, stinking cedar, and hiba cedar are part of an incomplete list), not one of which are a “true cedar”, within the genus Cedrus. Often botanists, taxonomists and those scientifically inclined will state their preference, if not their need, to use binomial nomenclature instead of common names to be more exacting, to help avoid confusion. Well with Alaska yellow-cedar, sometimes even the botanical nomenclature is, as Michael Dirr often has said, cloudy on a clear day. Known since the 1840’s as Chamaecyparis nootkatensis, this was actually first described as Cupressus nootkatensis in 1824. Twenty-first century molecular analysis led to revised taxonomic status and a resulting scientific debate. The decisions that influence accepted names for given plants are based upon taxonomic peer-reviewed, recorded opinion(s) with cited data source(s).  The discovery of a new tree species in northern Vietnam, Xanthocyparis vietnamensis established a new genus, Xanthocyparis, which also led to Alaska yellow-cedar being included in this new genus. At Mount Auburn, deferring to the International Botanic Congress, we along with other institutions accept Xanthocyparis. Nonetheless other institutions, and governmental entities concurrently are also using Callitropsis nootkatensis, which resulted from an earlier overlooked botanic description for Alaska yellow-cedar, or Cupressus nootkatensis. Hence Alaska yellow-cedar now usually includes synonyms following an accepted botanical name with each entity citing scientific data source(s) that warrant their naming decision. Regardless of these varied new and old botanic names, Alaska yellow-cedar is a choice conifer deserving of wider use. Native from coastal Alaska’s William Sound, down through British Columbia, Washington, Oregon, to the mountains of northwestern California, this is a slow-growing, long-lived species. Botanist and author, Douglas Culross Peattie (1898-1964) in A Natural History of Western Trees partially describes it, “…Alaska Cedar can be one of the most beautiful yet most sorrowful of western conifers…The great, long lower boughs of trees grown in the open sweep deeply down…the flat sprays of foliage droop so persistently…the whole tree has something of a weeping habit…” High praise also comes from Kim Tripp, former director of both the New York Botanic Garden and Smith College Botanic Garden, in her The Year in Trees, “…Of the myriad of conifers that can (and should) be used by more gardeners, the Alaska cedar is a standout…one of the most graceful conifers in nature and in the landscape. The foliage is dark, rich, bluish gray-green and is draped in flattened sprays from drooping branches…At this time of year when conifers are in special focus, Alaska cedar makes a picture of quiet drama and great beauty for gardens in winter.” The small, scale-like leaves occur in perpendicularly opposite pairs, pressed closely to the branchlets. These leaves when crushed emit a distinctive, though not sweet, fragrance. As with most conifers, there are separate inconspicuous male and female flowers occurring on each tree in the spring. When successfully fertilized the female flowers will later result in one-half-inch, or smaller, cones composed of 4 to 6 scales, most with a hard pointed tip. With long cultural importance these trees were frequently used by many northwest indigenous peoples. The lightweight, pale-yellow wood is close-grained and decay-resistant. With wood that wears smoother and not rougher, it was (and is) a long favorite for making paddles for canoes. Other uses included bows, ceremonial masks and totems, dishes, digging sticks, fish net hoops, using the fibrous inner bark woven into baskets, hats, mats, blankets and clothing as well as using leaves and green cones for several medicinal uses. The Tlingit “People of the Tides” culture has many creation stories regarding life and animals, including that of Natsilane and how Alaska yellow-cedar led to the creation of the first blackfish (killer whale). As an important timber tree, contemporary uses include flooring, cabinets, interior finishing, boatbuilding and in greenhouses. In many areas modern industrial logging, with significant Asian export, has severely reduced access for traditional cultural uses.

…The trees and the logs stood still

It was so quiet we could hear the birds… According to the Gymnosperm Database, the oldest documented Alaska yellow-cedar is one found in British Columbia of 1834 years, another one on Vancouver Island was dated to 1634 years. As the wood of these trees is so decay-resistant, there are many large, old specimens still standing elsewhere with hollowed-out centers that actually may even be older. The same source lists the largest known Alaska yellow-cedar at 200-feet-tall and 13.6-feet in diameter on Vancouver Island. The largest one in the U.S., located in Olympic National Park, Washington had a 12-foot diameter, and is 124-feet-tall. Of a concerning note, significant dying off of Alaska yellow-cedar within undisturbed native northwestern forests has been occurring for decades. After many coordinated studies evaluating possible causes, the current belief of these researchers is that this is a leading example of a tree species negatively impacted by climate change. Analysis of weather station data confirms the increased trend of warmer late-winters/early-springs. Comparing this with snow distribution models suggests reduced ground insulating snow cover, but persisting early spring freezing events. These complex factors combined with soil drainage data indicate mortality problems due to vulnerability of fine root freezing.

On your next visit to Mount Auburn, look for our Alaska-yellow cedar on Narcissus Path, Emily Path, and a variegated form on Sibyl Path. 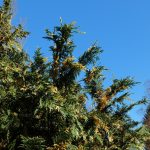 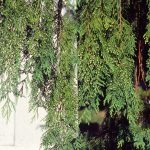 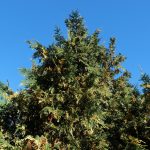 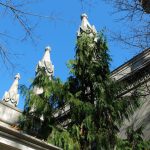 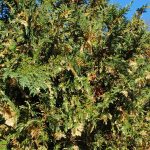 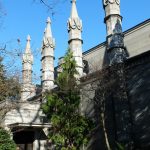 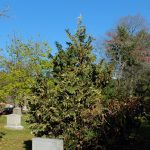 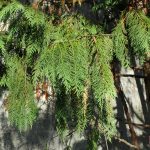 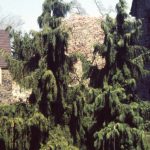 THE BALLAD OF TWO CEDAR TREES

Come listen to the story ‘bout a cedar that is red

The native folks say that it kept their family fed

Even though they didn’t use the cedar tree for food

They used the bark for baskets, and made houses from the wood

Well the next thing you know those burly loggers came

The locals said, “Weyerhaeuser is to blame!”

They said “California is the place you ought’ a be”

They say Callitropsis is the name we ought’ a use

Don’t say Chamaecyparis or folks will be confused

Now folks did some retention and they left some scattered trees

Along came the wind and it blew some cedars down

But they still have a life just lying on the ground

[If the salvagers don’t get ‘em!] Shake cutters, chainsaws

Yellow is declining and a lot of trees are dead

They’re worth a lot of money making houses in Japan

Yes, we love both of these cedars

Written for the “Tale of Two Cedar Trees” International Workshop, Univ. of Victoria, BC