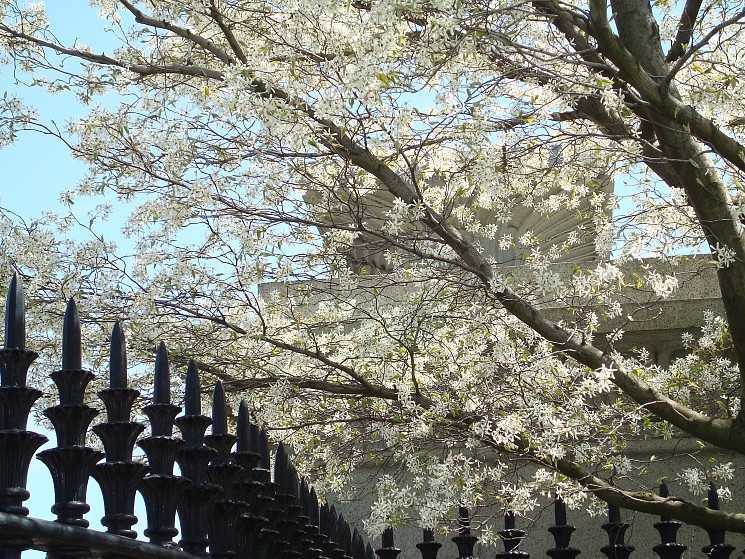 After our notable winter, countless people are awaiting proof that spring will arrive again. One native, arboreal accent appearing in the April landscape will be the white flowers of Amelanchier sp., commonly known as serviceberry or shadblow, and to some as Juneberry.  Amelanchier is a genus of about 20 (30) species of small trees and shrubs, found mostly in temperate North America, with a few species also native to Europe and Asia. For us in New England, they are our first native, showy-flowered, spring blossoming trees. While these primarily white (a few are initially light-pink), approximately 1-inch, thin-petaled, flowers, will persist for only a brief week at most, their arrangement in clustered racemes produce an airy, ethereal effect. Noted landscape architect Jens Jensen (1860-1951), in his 1939 book, Siftings, praised their appearance, “To see the real beauty of the Juneberry is to see its frail blossoms intermixed with snowflakes on a stormy day in early spring – youth daring the tempest…”

Lexically speaking, the common name shadblow, shadbush, or just shortened to shad, traces back to earlier history. It was observed that Amelanchier flowered concurrently with the annual spawning migration of shad (river herrings) up coastal rivers from the Atlantic Ocean.

These anadromous fish were once much more bountiful, and we herein quote Sheila Connor from her fascinating 1994 book, New England Natives, “At one time, the waters of every large river along the Atlantic coast would roil for days – often even weeks – from the immense schools of shad that invaded them each spring. Today there are fewer, but…males precede the females as the schools of fish move up rivers in waves….late April to early May is the time to watch both for the silvery-scaled shad as they flash through the water and for the frothy white flowers of the Amelanchier as they brighten the pale blue sky.”

Identification between species is often difficult. Differences beside plant size and overall habit include size of leaves, color and shapes of fruit, presence or not of pubescence on emerging leaves, and even color of emerging leaves (some purplish to bronze). William Cullina in his fine 2002 book, Native Trees, Shrubs and Vines states, “They freely interbreed where ranges overlap, creating a vast and notorious hybrid swarm that has driven sober botanists to drink. You never really know for sure what you are going to get when you grow these promiscuous rascals…”

However, many of the approximately one-to-three-inch long, serrated (toothed) margined leaves will provide another ornamental season of interest, with vibrant autumn colors from golden yellow, to orange, to brilliant reds. Additionally, Amelanchier leaves are preferred larval food to numerous species of indigenous butterflies, including tiger swallowtails, viceroys, white admirals, and red-spotted purples.

Native trees and shrubs with ornamental spring flowers and good autumn foliage are enhancements to any and many landscapes.  George Washington (1732-1799) at Mount Vernon, and Thomas Jefferson (1743-1826) at Monticello planted Amelanchier, as have countless individuals and designers since then.

We can add to those ornamental attributes another sweet promise, literally fulfilled in June and July. Amelanchier fruits, or pomes, shaped like tiny apples, ¼-1/2-inch in diameter are frequently eaten by people, as well as wildlife. Noted author, botanist, philosopher, Henry David Thoreau (1817-1862) wrote in his Journal on June 21, 1853, “…many bright red amelanchier berries and some purple and dark-blue ones…from the few perfectly sound and ripe I have eaten today, I should pronounce them superior to either blueberries or huckleberries…”  Wildlife such as chipmunks, squirrels, rabbits, raccoons, foxes, coyotes, deer, bear, and others search out Amelanchier to eat. Cedar waxwing, scarlet tanager, goldfinch, red-winged blackbird, wood thrush, hermit thrush, veery, rose-breasted grosbeak, cardinal, blue jay, flicker, red-headed woodpecker, downy woodpecker, robin, mockingbird, and many other birds found at Mount Auburn, are part of a list of over forty species of birds that relish these fruits. Certainly some Mount Auburn birders have had memorable summer sightings of birds foraging these fruits, even if they did not know how to identify an Amelanchier.

My favorite wildlife sighting at Amelanchier, while not at Mount Auburn, happened last July. I was staying at a friend’s house in northern New Hampshire. Early on a clear, sunny morning while having breakfast in front of a sliding glass door, my peripheral sight captured a black bear ambling diagonally across the yard. Suddenly it stopped to stretch its neck up to browse on some Amelanchier fruit. Then right there, about thirty-feet away in front of me, it stood up on two hind legs, displaying its black, furry, belly, and continued to munch on Amelanchier fruits for another 30 seconds. The bear then walk behind a barn and that was the last I saw of the bear.

While you will not have a bear sighting at Mount Auburn, during late April you may feel that spring has arrived when encountering any of the nearly one-hundred Amelanchier growing throughout our landscape.

One year he focused on a tree
Until, through sunlight pure as never afterward, he saw
The season, early spring, work upon those limbs
Its lasting magic, which the eye
Retains: deep in the brain
The shad-blow…

…The early bees are assaulting and fumbling the flowers:
They call it easing the Spring…