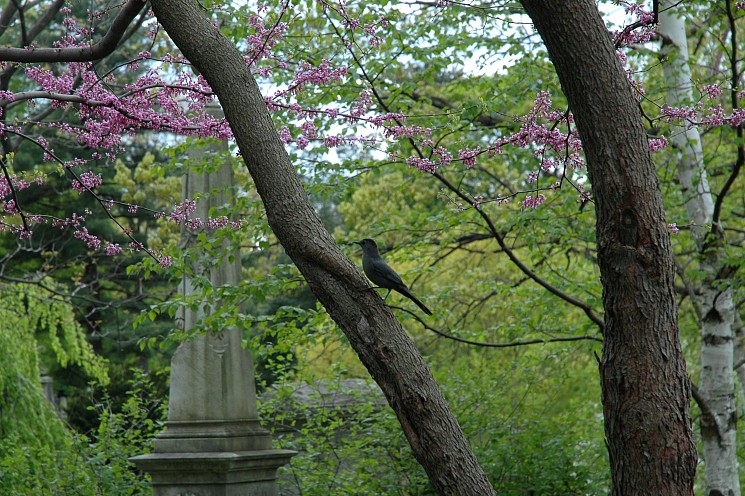 One of our native, small trees possessing memorable, even spectacular, early spring color is the Cercis canadensis, Eastern Redbud. As it is known that men are more likely to be color blind than women, surely this tree’s name was coined by a man otherwise it might perhaps have been dubbed magenta bud, or pink bud.

Nonetheless the name alludes to distinct, unopened flower buds, boldly glowing in the mostly bare landscape. In addition to the tree branch stems being brightly lit by these buds, these trees are cauliflorous, having direct flower formation, along older branches and trunks, which is rare outside of the tropics and sub-tropics. After a week or more of the bud display, the one-half-inch-long flowers, often in clusters of 4 to 8, emerge with a lighter-hued pink color.

These flowers are papilionaceous, or pea-like flowers, which have five petals of three different shapes. A single upper petal is referred to as the “standard” or “banner”, extending laterally on either side are two “wing” petals, and at the bottom are two adjacent “keel” petals. Such flowers are common in this botanical family, the FABACEAE. Cross pollination is usually accomplished by long-tongued bees. The bees are oriented into the flower by nectar guides on the standard/banner petal. Landing on the two lower keel petals causes the stamens to be pushed up, passing pollen onto the bee’s abdomen.

Usually not taller than thirty-feet, these trees are native from southern Connecticut and New York westward to southern Michigan, Illinois, eastern Iowa, Nebraska, then south to the Gulf of Mexico. Cultivated since the seventeenth-century, we know that George Washington (1732-1799) at Mount Vernon and Thomas Jefferson (1743-1826) at Monticello planted these ornamental trees. Eastern Redbud continues to be one of the most popular native landscape trees in the United States, with a 2009 U.S. Department of Agriculture report stating one year sales totaling over $21-million.

They have distinctive, alternate, simple, three-to-five-inch broad, heart-shaped leaves, which have an entire (non-toothed) margin. The flowers if successfully fertilized produce autumn seeds within a true pod. These two-to-five-inch-long, flattish pods helped give the genus its name. Cercis comes from the Greek kerkis, a weaver’s shuttle, reminiscent to these pods’ shape.  There is a white flowering variety, Cercis canadensis var. alba. There are also purple-leaved cultivated varieties available.

The genus includes approximately 10 (or less) species, depending upon differing taxonomists, with two being native to North America, six native to Asia, and one native to southeastern Europe and the Mediterranean.  It is the latter one Cerscis siliquastrum, Mediterranean Redbud that is commonly called the “Judas Tree”. In Matthew 27:5 Judas Iscariat returns blood money and commits suicide by hanging himself from this kind of tree.  Purportedly its formerly white flowers then turned red with either shame or blood.

Another species of note is Cercis chinensis, Chinese Redbud (below), often having a large shrub-like form. This is similar in leaf and fruit, but often is more abundantly floriferous.  In Traditional Chinese Medicine, its bark is used as an antiseptic.

At Mount Auburn’s Halcyon Garden, designed by Reed Hilderbrand Associates, you may view a beautiful allee of Cercis canadensis, Eastern Redbud. They will be in colorful bud and flower late-April, into early-May. With our never-ending winter last year they did not flower until May 11. In 2014 it was May 5, in 2013 it was April 29, in 2012 it was April 23.

…the cherry
and redbud
shake the rain
from their delicate
shoulders,…