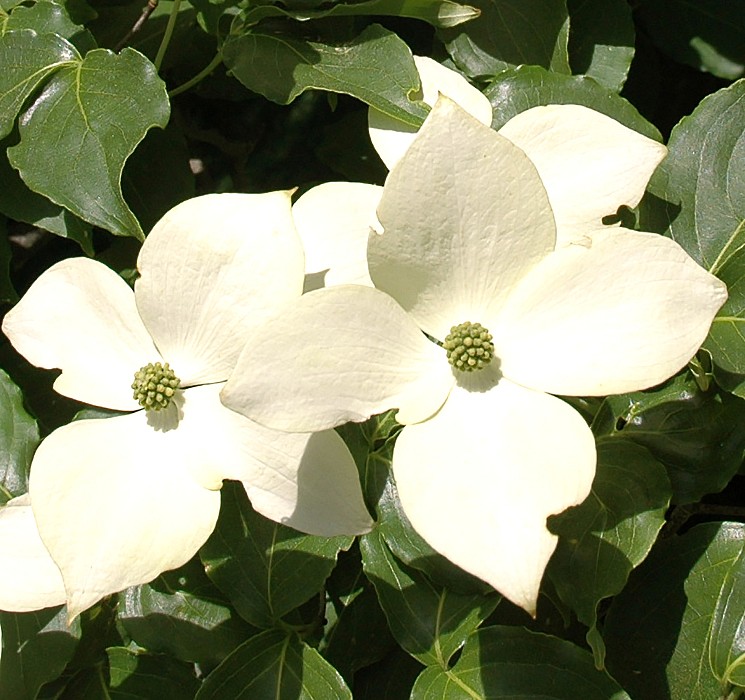 One small tree reliably enhancing our landscape during both spring and early summer is the Kousa dogwood, Cornus kousa. Their extravagant floral display tends to persist for four to eight weeks. Each showy flower is composed of four, taper-pointed, one-to-two-inch-long, creamy-white bracts, which last far longer than true petals. The reproductive flowers are rather inconspicuous, small, yellowish-green, located in the center of the four bracts. While the trees are already in full leaf, these vivid flowers occur upon two-inch-tall erect stems (peduncle), hence the flowers are raised above the foliage creating a visually delicious frosting-like effect. Kousa dogwood, Cornus kousa traditionally have been included in the genus Cornus, which includes 30-60 species, a wide number range, but to some this taxonomy has become unsettled, even controversial, resulting from recent molecular phylogenetic review.

Native to Japan, Korea and China, this was eventually introduced to commerce in the United States and Europe by 1875. Perhaps its earliest live-plant growing in the United State was in 1861, in Jamaica Plain, at the three-acre, summer home of the historian, horticulturist, Frances Parkman (1823-1893). Parkman is buried at Mount Auburn in Lot 2919 on Indian Ridge Path.

Earlier cut and dried specimens of Kousa dogwood, Cornus kousa had been obtained by botanists aboard U. S. scientific expeditions, as well as from missionary/naturalists. Some of those herbarium specimens along with those of many other Asian plants had been delivered, to be studied and/or identified, to Harvard University’s noted botanist, Asa Gray (1810-1888), [Lot 3904, Holly Path]. Gray noticed morphological similarities of Kousa dogwood with our eastern North American Flowering dogwood, Cornus florida, which have rounded rather than pointed bracts, and blooms several weeks earlier in the spring on leafless branches. Gray’s astute botanical observations regarding species of this genus, along with those of other genera, significantly helped in later support for Charles Darwin’s (1809-1882) 1859 publication of the then highly controversial Origin of Species.

Here we excerpt from Stephen Spongberg’s fascinating Reunion of Trees, “…he recognized many of the exotic plants collected in far-off Japan as identical to those growing in the forests and fields of eastern North America. Here was proof of a floristic relationship Gray had suspected since he had reviewed Siebold and Zuccarini’s Flora of Japan [1835] years before…Yet these same plants were not known to occur in the intervening regions of North America or Eurasia…In seeking an explanation… drew upon… a key tenet from the theory of evolution through natural selection that his frequent correspondent, Charles Darwin, had proposed and discussed in his letters to Gray.”

A. Hunter Dupree’s authoritative biography, Asa Gray: American Botanist, Friend of Darwin also explained how pre-glacial flora that once encircled the globe were significantly altered during the last glacial epoch, leaving similar floras in two geographic disjunct regions, eastern Asia and eastern North America. Dupree writes, “…After he classified the Japan collections in the usual way he arranged the results in tabular form, … kind of statistical analysis… some forty genera were alone found in eastern North America and Japan…the geological processes he envisioned have proved in their major outlines if not their details essentially correct.” Gray’s seminal study and research of floristic disjunction continued to inspire additional generations of botanists, biogeographers and paleobotanists among others.

In addition to the award worthy long-flowering period of Kousa dogwood, Cornus kousa, these trees provide multiple season interest. The opposite, simple, two-to-four-inch-long leaves, with entire margins, have curving veins common with other dogwoods, and remain problem free during the growing season. Autumn foliage ranges from vivid red to darker maroon, and may persist for three weeks or longer.

If the earlier flowers were successfully fertilized, late summer will produce emerging one-half-to-one-inch diameter fruits (drupes), which resemble raspberries. Believed to have evolved to be attractive to Asian monkeys, there are nonetheless many species of birds which eat them. One bright moment I relish was sitting on the ground nearby a Kousa dogwood in early autumn when a flock of cedar waxwings converged within the canopy and rapturously fed en masse.

In youth, these trees often have a vase-shape, but in maturity the 20-30-foot high trees with an equal width develop a strong horizontal branching pattern with a more rounded habit. As many of us enjoy hearing that advanced age produces greater beauty, the bark of Kousa dogwood exfoliates with age, creating a mottled gray, tan and brown which can be exquisite when contrasted within the winter-snow.

This month, or any time of year, when you visit Mount Auburn, look for the over seven dozen Kousa dogwoods or its cultivated varieties that enhance our landscape.