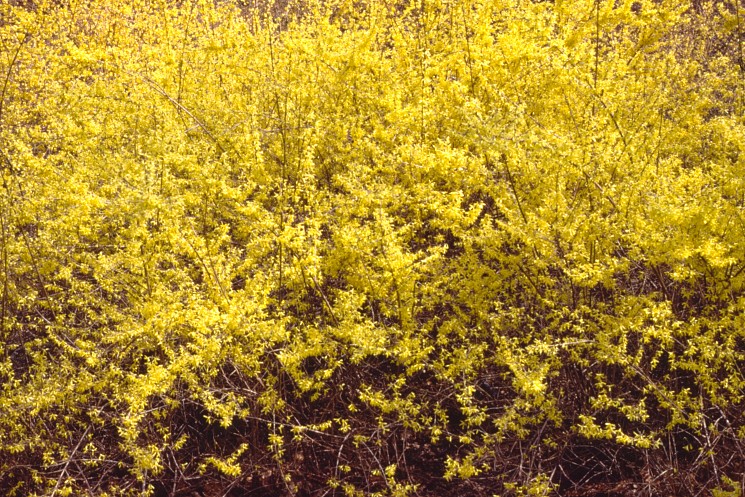 Forsythia is primarily an Asian genus, and has been cultivated in Chinese landscapes since at least the Tang dynasty (618-907 AD). Of the eleven generally accepted species, ten are native to eastern Asia, and just one is native to the mountains of the Balkan Peninsula, in southeastern Europe (not “discovered” until 1897). Although seemingly ubiquitous during most springs, there are no species native to North America. First introduced to European horticulture in the 1830’s, Forsythia has unquestionably become one of the popular, dependable, definitions of spring.

The eminently quotable author, and famous plant explorer, Ernest Henry Wilson (1876-1930) rhapsodizes from his 1931 book, posthumously published, If I Were to Make a Garden, “Of all the shrubs which blossom at the first blush of spring Forsythias or Goldenbells are surely the most joyous; their clear yellow bells borne in utmost profusion are like so much bottled sunshine and never fail to uplift the heart and cheer the spirit of the owners and of the passerby. Indeed, among all the wealth of shrubs that we can grow in our gardens none gives a richer display of pure yellow than do these Oriental plants…They are best in my opinion as a tangled mass and if left alone they will form under those conditions an almost impenetrable thicket.”

Forsythia is named to honor William Forsyth (1737-1804), Scottish plantsman, and King George’s (1738-1820) Superintendent at the Chelsea Physic Garden. Forsyth was one of the founders of the Royal Horticultural Society in 1804. Unfortunately, Forsyth’s legacy also includes Forsyth’s Plaister, a purported heal-all for wounds of injured trees. Analogous perhaps to some modern products, pitched on late-night television, this concoction of cow-dung, wood-ash, lime-rubble, sand, urine and soap, actually received a substantial British Government grant in hopes it would help produce more perfect oak trees, then urgently needed for the Navy. Nonetheless, it proved to be a worthless compound.

…Forsythia and magnolia bring me
spring, when he walks into the house
he has wings…

These deciduous shrubs are in the OLEACEAE, the olive family, have characteristic opposite branching, often with arching stems, growing six to ten feet high. The much loved, bell-like flowers have four petals. Forsythia flowers occur from buds on branches that were produced the previous summer. Undoubtedly the most frequently planted Forsythia, is Forsythia x intermedia, a hybrid. A plant hybrid is the offspring, resulting from two different species that cross pollinate.  Hybrids often happen naturally, but they are also frequently the result of human intervention.

Forsythia x intermedia’s spontaneous, horticultural lineage has been traced back to nineteenth-century Germany, where two different Chinese species, Forsythia suspensa and Forsythia viridissima were growing in close proximity. Each of these species had been introduced into Europe before 1850. The twentieth-century, renowned horticulturist and author, Donald Wyman (1904-1993), gave the highest praise to these species, their resulting hybrid, and the many cultivated varieties from them, “ …it is chiefly F. suspensa and F. viridissima from China which have been largely responsible for the best of the forsythias grown…”

Of added interest, cutting branches in February or/and March, and putting them in water, in warm indoor rooms, allows reliable “forcing” of the flowers. Hence, Forsythia is popular for floral arrangements, or just to speed along the end of long winters.  After the horticultural barrenness of this past winter, on your spring visit to Mount Auburn, look for our myriad golden yellow flowers of Forsythia, on Garden Avenue, Elm Avenue, Birch Avenue, Story Road, Field Road, and Hazel Path, among other locations.

That night the wind stirred in the forsythia bushes,
but it was a wrong one, blowing in the wrong direction
“That’s silly. How can there be a wrong direction?
‘It bloweth where it listeth,’ as you know, just as we do
when we make love or do something else there are no rules for.”…