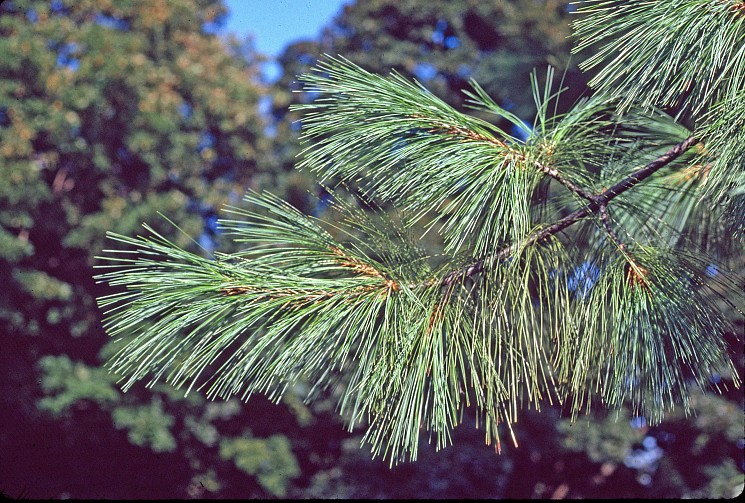 …She will love the smell. Pine. sage, cypress.

She will love the sound…

We return to a familiar theme, “Who does your garden grow?” With this theme in the past we have discussed the Cherokee chief Sequoia, Benjamin Franklin and the French botanist Pierre Magnol among others. Herein we focus on Pinus wallichiana, Himalayan Pine in tribute to a commonly unsung, even forgotten, plant collector-botanist, Nathaniel Wallich (1786-1854).

Himalayan Pine is a handsome, medium-size (30-50-feet) pine tree which grows at 6,000’ – 12,500’ elevation from eastern Afghanistan across northern Pakistan and India, Nepal and into southwest China. The large genus Pinus includes at least 110 evergreen species worldwide. When identifying most plants, a closer observation helps establish key visual clues. With pine leaves (needles) the individual needles occur in clusters (fascicles) mostly of 5’s, 3’s, or 2’s. Jeffrey pine and lacebark pine have needles in 3’s and Scotch pine and Austrian pine have needles in 2’s. Eastern white pine, bristlecone pine and Korean pine along with Pinus wallichiana, Himalayan Pine have needles in fascicles of 5’s. Pinus wallichiana, Himalayan Pine needles at 5-8-inches-long are longer than the other 5-needle species mentioned. Additionally, their needles are often slightly bent near the base helping to create a pendulous habit. To the viewer this provides a subtle, yet distinct graceful drooping of its branchlets.

Pine cones do vary in size and even shape on the same tree, as well as from different trees. However, in general the cones of Himalayan Pine are longer/larger than the other 5-needle pines covered here.

Wallich often sent herbarium specimens and live plants back to England’s Royal Botanic Garden at Kew. This during the later life of the great Sir Joseph Banks (1743-1820), who believed in the internationalism of science, and successfully caused almost every ship sailing to Britain from any British colony to carry plants. Today Kew’s herbarium contains around seven million preserved plant specimens. Housed separately from the main collection is that of the East India Company, the Wallich Herbarium, Kew’s largest separate herbarium.  Another location of his important collections is the Central National Herbarium of the Botanical Survey of India in Kolkata. Besides Pinus wallichiana he was also commemorated in plant taxonomy with Taxus wallichiana, Ulmus wallichiana, Lilium wallichiana, Dryopteris wallichiana, Schefflera wallichiana, Geranium wallichianum, and Rubus wallichii, among others. Twenty different genera include species within them named honoring Nathaniel Wallich.

In 1829 at the second founding meeting of the Massachusetts Horticultural Society (MHS), to which Mount Auburn would soon owe its very existence, a committee was chosen to create a list of honorary and corresponding members. This exemplary first list included notable botanist, Augustin P. de Candolle (1778-1841), presidents of the Pennsylvania, New York, London, Paris Glasgow Horticultural Societies, as well as plant curators at Kew, Liverpool and Wallich, curator of the Botanical Garde at Calcutta, among others.

Fittingly Oakes Ames (1893-1970), Mount Auburn’s eighth president (1934-68), writing in his 1952 Mount Auburn’s Sixscore Years provides our closing citation, “…the records of the Horticultural Society are strangely silent…However…New England Farmer for 1833 and 1834…we learn that…over a hundred varieties of seeds including Himalayan Pine and Deodar Cedar, from Mr. Wallich of the Botanical Garden at Calcutta…” were delivered to MHS.

Lamentably MHS’s Mount Auburn’s plant records from 186-years ago were not to our current standards and the germination success of Wallich’s seeds are left to our imaginations.

On a future visit to Mount Auburn remember this notable plant collector as you look for fine examples of Himalayan Pine on Crystal Avenue, Alder Path, Spelman Road and Petunia Path among other location.