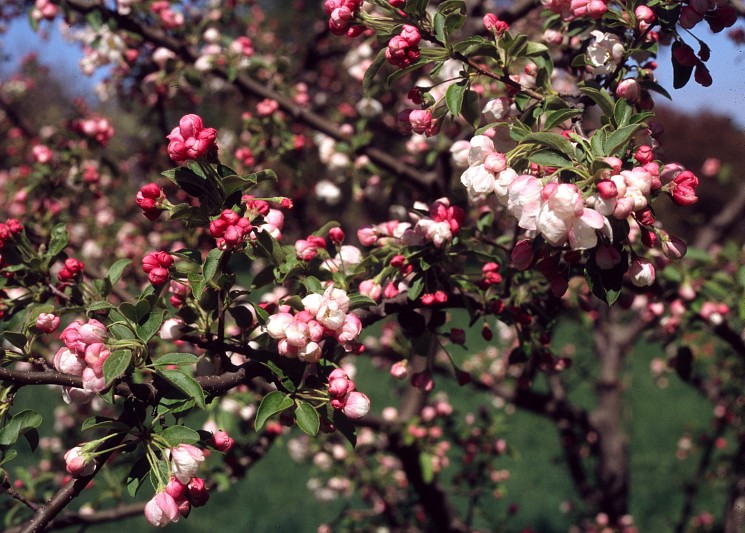 Flowering crabapples, Malus sp. are outstanding, small, ornamental trees. Their multiple-season interest begins in early-May with colorful flower buds. Often there are beautiful pink or red buds, even on some trees which may later have white blossoms.  The flowers are the real show stoppers though, their gaudy, often fragrant, floral displays, ranging from whites, to pinks, to bright reds, have made them favorites, for generations of people, and centuries of bees.

Some crabapples’ emerging, new foliage is red, others may have purplish, or bronze –colored leaves throughout the spring.  Autumn foliage is colorful for some, and several cultivated varieties are eye-catching for the bright, colorful, persistent autumn fruits. These fruits then are favorite foods for blue jays, cardinals, cedar waxwings, Baltimore orioles, downy and red-headed woodpeckers, among numerous other species of birds found here.

Crabapples are in the same botanical genus, Malus, as are our edible favorites Macintosh or Cortland. So were the other apple seeds that helped make the American legend (and Massachusetts native) Jonny Appleseed, i.e. John Chapman (1774-1845). Likewise even the apple that inspired the English scientist, Isaac Newton (1642-1727), to develop his law of universal gravitation. The definition that generally separates a crabapple from an apple, is the size of the fruit (pome), with most fruits less than 2-inches in diameter termed a crabapple.  Small fruit nonetheless, over time there has been an enormous number of cultivated varieties developed and grown.  Unfortunately, many Malus are susceptible to a host of diseases: apple scab, cedar-apple rust, fire blight, canker, powdery mildew, etc. and insect problems: scale, borers, aphids, eastern tent caterpillar, Japanese beetle, etc. Hence, there has been much research to identify crabapples’ susceptibility, and then to encourage the planting of more disease, and insect resistant varieties. The following are a few Malus in our landscape having ornamental beauty, along with good, or acceptable, disease/insect resistance.

Malus baccata, Siberian crabapple, is native to eastern Siberia, Mongolia, and northern China. Originally introduced into Europe in 1784, this has provided parentage for many hybrids and cultivated varieties. This species has delightfully fragrant, white, long-stalked, single flowers, which regularly occur profusely. The red and yellow 3/8-inch fruits, produced annually, feed birds and wildlife. Look for our spectacular specimen on Flicker Path, at Meadow Road.

Malus hupehensis, Tea crabapple, is one of the many Asian plants introduced to the west by the extraordinary plant explorer, and notable author, Ernest Henry Wilson (1876-1930). It gets its common name from the former practice of rural Chinese to use the steeped leaves to create a substitute drink they referred to as “red tea”. The spring display begins with pink buds, opening to white flowers that are fragrant. The greenish-yellow, sometimes tinged red, fruits are produced heavily on alternate years. This is a tree awarded the Royal Horticulture Society’s, Award of Garden Merit.  Look for several of our Tea crabapples on Azalea Path, Thistle Path, and Elm Avenue.

Malus floribunda, Japanese flowering crabapple, is another beautiful crabapple, which begins with buds of a rich red color, opening to fragrant, flowers, eventually fading to white.  The polychromatic effect of buds mixed with fully opened white blossoms, suffused with a gentle, sweet fragrance, has perpetuated the ornamental reputation of this species. This was originally introduced from Japan by Phillip von Siebold (1796-1866), a Bavarian physician-botanist. Curiously, he also is credited with performing the first cataract operation in Japan, which helped gain him increased travel access to a culture then wary of outsiders.  The 3/8-inch, yellow and red fruits are produced annually, and are often quickly eaten by birds. Look for our Japanese flowering crabapples on Heath Path, Curfew Path, Oak Knoll Path, and Mound Avenue.

Malus sargentii, Sargent crabapple, bears the name of Charles Sprague Sargent (1841-1927), the founding director of the Arnold Arboretum of Harvard University, who first brought back seeds of this diminutive-in-height, fragrant, flowering tree from Japan. Here we quote Sargent’s fellow plantsman, Ernest Henry Wilson (1876-1930), from his 1930 book, Aristocrats of the Trees: “…This species is native to the salt marshes around Muroran, Hokkaido, northern Japan, where it was discovered in 1892 by the late Professor C. S. Sargent, and introduced into the Arnold Arboretum. It has rigid, spreading branches, the lower ones flat on the ground, and particularly well suited for covering slopes and banks. The flowers, abundantly produced in umbel-like clusters, are saucer-shaped, round, and of the purest white; they are followed by a wealth of wine-colored fruits which are covered by a slight bloom and remain long on the plants.”  We have an outstanding specimen just inside our entrance gate, on Garden Avenue, as well as on Western Avenue, Pond Road, and Ailanthus Path, among other locations.

Malus ‘Donald Wyman’ is a compact, rounded, 15-20’ tree with multiple season interest. Spring’s expanding buds are pink, then opening to white, fragrant flowers. Autumn’s 3/8-inch, bright-red fruits, often retained into early winter will provide a brilliant juxtaposition to early snowfall.  The original plant was a spontaneous seedling found in the Arnold Arboretum, in the late 1940’s. It was later propagated into commercial production, and named for Donald Wyman (1904-1993), renowned garden writer, and the Arnold Arboretum’s horticulturist from 1936-1970. This was recipient of the 2001, Cary Award for Distinctive Plants of New England, presented by the Worcester County Horticulture Society. Look for some of our fine specimens at Halcyon Avenue, Beech Avenue, and Camellia Path.

Mount Auburn’s 175 acres include 114 Malus, representing 58 different taxa, far more than the few discussed herein. So on your spring visit be sure to enjoy the parade of these, and all of our crabapples blooming throughout our landscape.

…High in the apple-trees the bees
Are humming, busy in the sun,-…

…the blossoms open
like pink thimbles
and that black dollop
of shine called
bumblebees stumbles in.

Apple blossom petals lay on asphalt
fallen from the tree at the road’s turn
white as the flesh of the apple
will be, flushed pink
with the same blush
tender and curved as cheeks;…

…Lost in nights of starlight, in the garden
Where apple trees from paradise are found…

…The purity of the apple blossoms is incredible.
As the wind dies down their fragrance
Clusters around them like thick smoke.
All day they roared with bees, in the moonlight
They are silent and immaculate…

Across the fence the apple tree
drenched with white my neighbor’s lawn
and burdened every breeze with scent,…

…To catch the freshened, fragrant breeze
From drenched and dripping apple-trees…

O You,
Who came upon me once
Stretched under the apple-trees just after bathing…