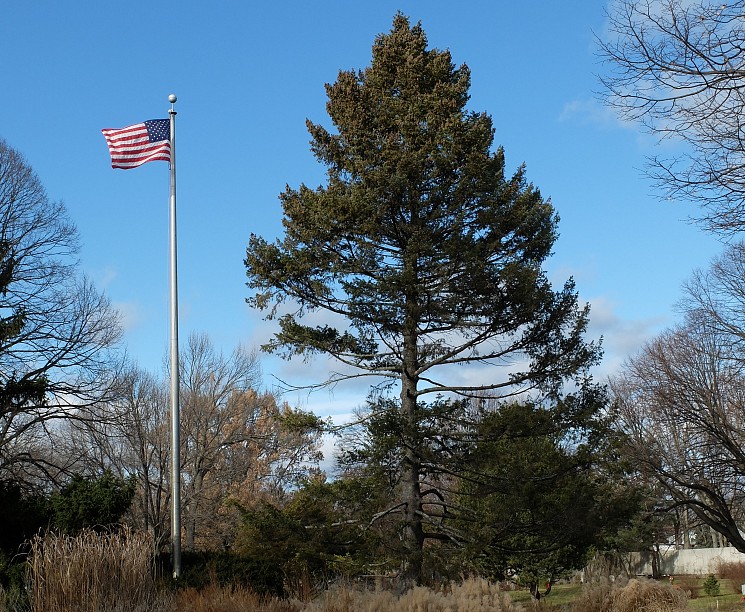 uncover the hidden beauties of the world,

Mount Auburn’s picturesque landscape is also an outstanding arboretum, collectively comprising a significant portion of worldwide botanical biodiversity. Herein we may learn of countless interesting plant histories, from New England natives to European, Middle Eastern, and Asian members of the plant kingdom.  Some of these natural histories may be associated with Native Americans, colonial settlers, and much later on, with nurserymen and horticulturists. Still other stories recount the lives of adventurers and/or plant collectors. To talk about our Pseudotsuga menziesii, Douglas Fir, is an opportunity to recall the two plantsmen who respectively first described it and later introduced it, Archibald Menzies (1754-1842), and David Douglas (1798-1834), each successful plant collectors.

But first, a few sentences about the tree itself. Douglas Fir, native to northwestern North America, as well as at higher elevations in our western mountains, is botanically not a true fir (Abies), having pendulous rather than upright cones, among other differences. Its one-inch-long, evergreen, leaves reminded some of hemlock, but it is not a true hemlock (Tsuga), hence the scientific name Pseudotsuga. The aforementioned pendulous, cones are three-to-four-inches-long, and are visually distinctive, having narrow, three-pointed bracts protruding from between the cone scales. Some have likened them to a three-forked snake’s tongue. The wood of this species, with strength and lightness, has had many economic uses, from housing timber, flooring, paneling, furniture, to maritime usage. The USS Constitution has used Douglas Fir for keel and masts during its long life. Douglas Fir  has also been used by many as a Christmas tree. Returning to our plant adventurers, Archibald Menzies, a Scottish, surgeon-naturalist, sailed and served with English Captain George Vancouver (1757-1798) during the exploratory coastal charting (1791-1795) of the Pacific Northwest. Menzies, who had earlier spent four years on the east coast of America, exploring and learning that area’s trees and shrubs, brought back some of the first Pacific area dried plant samples to European science.  Menzies first recorded our Douglas Fir, along with the Oregon grape, Mahonia aquifolium, (found growing at Mount Auburn on Poplar Avenue and Fountain Avenue) Western redcedar, Thuja plicata, (found on Central Avenue and Garden Avenue) and Alaska yellow-cedar, Xanthocyparis nootkatensis (found on Narcisssus Path). While in San Francisco, Menzies was credited as the first European to discover the coastal redwood, Sequoia sempervirens, and while off of the coast of Chile, the monkey puzzle tree, Araucaria auricana. There are numerous other plants that he has been credited with first discovering for botanical science. Thirty years later, David Douglas, a fellow Scot, and lifelong horticulturist, would follow Menzies to our Pacific Northwest. Beforehand, in 1804 the Horticultural Society of London was founded, and soon became a leader in the collection and dissemination of horticultural knowledge.  In 1823, Douglas was sent as an agent of this Horticultural Society to eastern North America, to bring back primarily agricultural varieties of plants, which he accomplished.  The next year, in 1824, the Society sent him to explore and collect in the Pacific Northwest. One of the trees he recorded, and sent back seeds of, was that which now carries his name. The largest one he recounted measured 227-feet-tall, and 47-feet around.  This is a mighty conifer of the northwest, which has had individuals measured at over 300-feet-tall.

. . . there is an unutterable melancholy, a complete negation that is overwhelming-. . .

I stand spellbound, unable myself to move for the power and wonder of it. . . . Douglas’ extended, successful expedition sent back hundreds of plants, seeds, skins of animals and birds, as well as journals recording his travels. He returned to England in 1827 via Canada’s Hudson Bay, after crossing parts of the Rocky Mountains on foot. His discoveries and plants collected exceeded all prior expectations.  Late in 1829 he commenced another extended exploration, of California, the Pacific Northwest and the Hawaiian Islands. Unfortunately this journey ended with his tragic death, falling into a wild animal pit trap in Hawaii, in 1834.

On a future visit to Mount Auburn, perhaps pay a moment’s reflection to these two plant explorers, as you come across some of the more than 120 Douglas Firs growing throughout our landscape. are born to wander, my wife says, but rocky slopes I have waited for the uncertain revelation, have

teased the edges of that common knowing

that vibrates in the light between living things

who work in different ways to make being possible. . . .