The singular and cheerful life

If we tasked the populace to compile a list of “cheerful” flowers, one could imagine Purple coneflower, Echinacea purpurea surviving the final cut. This tall, perennial, native wildflower exudes visual gayety, which persists over an extended period of bloom. Its six-inch-across, daisy-like, rose-purple flowers are unmistakable in the summer gardens. Striking as well in meadows, moist prairies and edges of low woods of the eastern United States. These eye-catching beauties are within a small genus of fewer than ten species. All these species are native to North America. Contrastingly this genus is within the family ASTERACEAE, also called the COMPOSITAE, one of the largest families of flowering plants worldwide, with at least 1,335 genera and over 23,000 species. Purple coneflowers upon close observation have raised, cone-shaped, bronzy-brown to orange centers, surrounded by attractive, flat, purplish (sometimes white) petals which will transition from being held horizontal to an eventual drooping aspect. These colorful ray petals, up to two-inches long, are sterile and may persist for two months. The central cone-shaped heads are comprised of many individual flowers (florets) arranged in a spiral formation. These hermaphroditic florets include both male and female (stamen and pistil) structures. When the stamens are mature, its bright orange pollen adds a colorful luster. Butterflies, bees and other insects are reliable, repeated pollinators of these flowers.

…The butterfly and I had lit upon,

Nevertheless, a message from the dawn,… One-hundred years before Mount Auburn’s visionary founder, physician/botanist, Jacob Bigelow (1787-1879) was born European naturalists/plant explorers were enthusiastically collecting new world plant treasures in situ to send back to European scientists and garden lovers.  John Bannister (1650-1692), English Anglican reverend and a university-trained naturalist, in 1679 settled in Virginia, from where he sent new world plant discoveries back to the Bishop of London to be grown in the Oxford Botanic Garden (established in 1621).  He is credited with introducing these flowers to Britain, sending the first American Purple coneflower seeds in the mid-1680’s.  He also introduced to Europe balsam fir, sweetbay magnolia, scarlet oak, honey locust and sweetgum along with many other North American native plants.  In our own time, cultivated varieties of Purple coneflower, Echinacea purpurea have been accorded the Award of Garden Merit by the Royal Botanic Garden at Kew. Besides being a great garden plant Echinacea has been and is widely used as an herbal medicine.  One notable citation goes back two-hundred years to the Lewis and Clark expedition of 1804-06.  Mid-expedition a large shipment of journals, maps, field notes, animal skins and bones, mineral samples and plant specimens was sent down the Missouri River to St. Louis, addressed to President Thomas Jefferson (1743-1826).  Meriwether Lewis (1774-1809) in a letter to Jefferson gave a brief description of the usefulness of coneflower, “…This specimen of a plant common to the prairies…among the natives…had used the root…with the most happy effect in cases of the bite of the mad wolf or dog and also for the bite of the rattle snake…”  He added how to make a poultice from the root, and that he was enclosing a few pounds of the root for the American Philosophical Society to experiment with.  Lewis was recounting and including roots of a closely related species, Narrow-leaf coneflower, Echinacea angustifolia.

Both Narrow-leaf coneflower, Echinacea angustifolia and Purple coneflower, Echinacea purpurea were used for over 400-years by Native American tribes including Sioux, Lakota, Omaha, Winnebago, Kiowa, Crow, Comanche, Pawnee, Choctaw and Cheyenne among others.  Different tribes introduced this healing use to European colonists and it was widely used during the 18th and 19th-centuries for the treatment of wounds and infections and as a general “cure-all” for a host of maladies.  Today many people believe in its value to shorten the duration of the common cold.  Herbalists suggest it may help boost the immune system, reduce inflammation and help the body fight infections.  Clinical studies have been variable, some have shown positive results while others suggest no impact at all.  The University of Maryland Medical Center’s webpage reports the above ground portions of Echinacea purpurea are most effective.  The same source also cautions that in a ConsumerLab.com study of 11 brands purchased for testing only 4 contained what was stated on their labels.

William Cullina, director of the Coastal Maine Botanical Gardens and noted author is excerpted herein to add a coda to this topic from his Growing and Propagating Wildflowers of the United States and Canada.  Cullina writes, “Coneflowers lead a double life these days.  They continue to be much loved as garden plants on the one hand while being embraced by the popular consciousness as an herbal remedy of unparalleled ability on the other.  I have recently boarded the Echinacea train myself, but I still wonder – am I well because it worked or did it work because I am well?  An egg is a chicken unless you drop it first.  Regardless, they are indispensable plants in the summer garden, and they add welcome splashes of pink and purple to our prairies and meadows.”

…I truly enjoy my coneflower

Her beauty amazes me so.

‘Magnus’ purple coneflower, Echinacea purpurea ‘Magnus’ was awarded the 1998 Perennial Plant of the Year by the Perennial Plant Association.  Certainly, this spurred an increased usage of Purple coneflowers by many gardeners.  Coincidentally, since then many new cultivated varieties have been introduced, including breakthroughs in color and flower form.  Available colors now include yellow, orange, mango, coral, salmon, even green.  Over the past dozen to 15 years there have been five or more new cultivars released every year.  Their names alone may inspire, ‘Coconut Lime,’ ‘Green Envy,’ ‘Hot Papaya,’ ‘Flame Thrower,’ ‘Mango Meadowbrite,’ ‘Tangerine Dream,’ ‘Pure Honey,’ ‘Maui Sunshine,’ ‘Sunrise,’ ‘Salsa Red,’ ‘Primadonna Deep Red,’ ‘ Secret Affair,’ or ‘ Fatal Attraction.’

On a summer visit to Mount Auburn look for some of our purple coneflowers or their cultivars at the Washington Tower meadow planting, the butterfly garden at Willow Pond, greenhouse garden, Ash Avenue, Garden Avenue, Rosebay Avenue, Central Avenue and Spruce Avenue among other locations. Walking in a meadow green

Fair flowers for to gather… 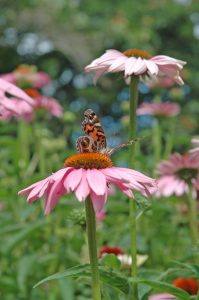 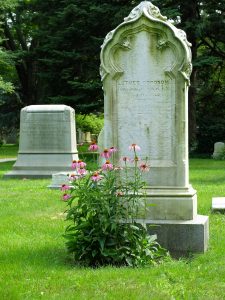 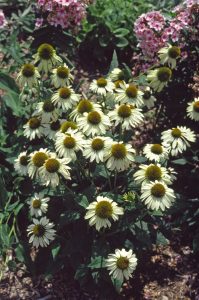 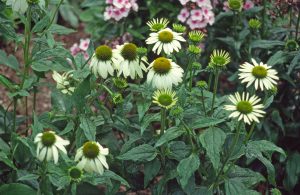 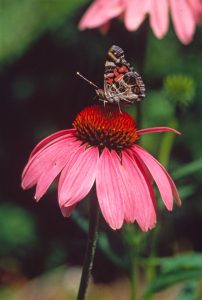 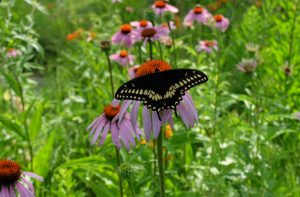