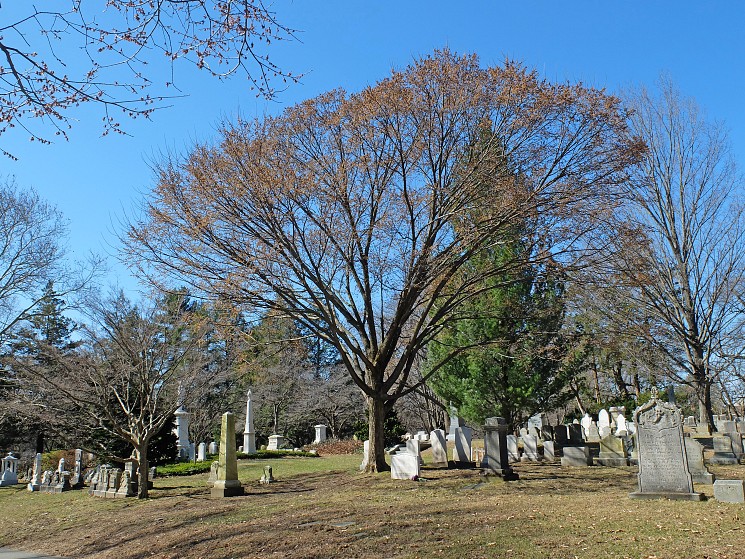 “Don’t cry for me America. I never left you,” scattered locations within Mount Auburn seem to speak to us anthropomorphically. If not with these exact enunciated words, the continuing presence of the oft described canopies of American elms prove these much beloved arboreal sentinels never reached the comparable nadir of our American chestnuts. Nonetheless scores of millions of American elms have died over the last eight decades due to Dutch elm disease (DED).

Yet each April, we continue to count on one reliable phenological sign of New England’s spring, the American elm flowers, collectively tinting winter’s former stark canopies a light, purplish/red color. Weeks before other spring ornamental notables such as forsythia, cherries, magnolias, dogwoods, etc. and well before producing leaves, these flowers are commonly overlooked.Maya Angelou has stated,“Everything in the universe has a rhythm, everything dances.” Hence, after winds as well as early insects have danced through these flowers, cross-pollination fertilizes ovules which develop into elm seeds. These ½-inch, rounded samaras (winged, light-weight seeds) mature in May and can be blown considerable distances from the parent trees.

Thomas J. Campanella has authored, Republic of Shade: New England and the American Elm, the definitive overview of this once popular shade tree dominating streets in towns and cities across the country, even designated the state tree of both Massachusetts and North Dakota. Then in the 1930’s, a vascular wilt disease (DED) was accidentally introduced to the U. S. likely on logs imported from Europe for use as veneer.

DED is “Dutch” (actually Asian) because early researchers identifying the fungus were Dutch. DED was a problem in Europe 20 years before coming to our country. Causal organism was initially determined to be the fungus Ophiostoma ulmi (formerly Ceratocystis ulmi) with later an additional more aggressive Ophiostoma novo-ulmi. Compounding and exponentially exacerbating the pathogen virulence were European bark beetles. Transporting fungal spores from infected trees, they bored into the outer bark of elms, making tunnels (called galleries), mating and leaving their eggs under the bark.

Societal reaction to DED, slow at first, ramped eventually into literal overkill. Rachel Carson’s 1962 classic Silent Spring, recounts then contemporary efforts to control these bark beetles using DDT. “Spraying for [DED] began in a small way…soon it became evident that something was wrong…graveyard for most of the robins…at first…suspected some disease of the nervous system, but soon it became evident…robins were really dying of insecticidal poisoning…exhibited well-known symptoms…not so much by direct contact…indirectly by eating earthworms.” She reported on further published research, “killing directly not only the target…bark beetle, but other insects, including pollinating species…the poison forms a tenacious film over the leaves and bark. Rains do not wash it away. In the autumn the leaves fall to the ground…begin…becoming one with the soil…aided by…earthworms…also swallow the insecticide…concentrating in their bodies…become biological magnifiers of the poison…” Finally, “…even as the elm program is only one of the multitudinous spray programs that cover our land with poisons.”  So DED which many communities had mobilized to eradicate unanticipatedly expanded Carson’s grass-roots audience, hence influence, in contrast to assurances of the insecticide people that their sprays were “harmless to birds.”

After more than half-a century of research with numerous cultivar selections, no American elm has proven totally resistant to DED. Some however, are tolerant and recover after infection. While American elms will never regain their former prominence, their American tragic saga also provided urban forestry with the lesson to forever avoid the danger of monoculture plantings, as was often common, sometimes near ubiquitous, with American elms. This has led some advocates to consider as a guideline, a 10-20-30 goal. Plant no more than 10% of any one species, plant no more than 20% of any one genera, plant no more than 30% of any one family. The true goal being to ensure genetic diversity within all urban tree canopies.

On a future visit to Mount Auburn look for some of our grandest mature straight species of American elms on Asclepias Path, Pond Road and Bluebell Path. Other fine examples are found on Arethusa Path, Bigelow Avenue, Harebell Path and Garden Avenue among other locations.

…Along about then, the middle of May,
I say to myself: “any day…”
And I guess up there in the tall elm trees
The leaves say something like “Listen, breeze:
It’s no good whispering stuff; just blow!
There’s a skyful of seed here set to go.”
And the breeze perks up
And the seeds fly loose-…

…The lovers disappeared into the wood.
I sat among the boughs of the fallen elm
That strewed an angle of the fallow…