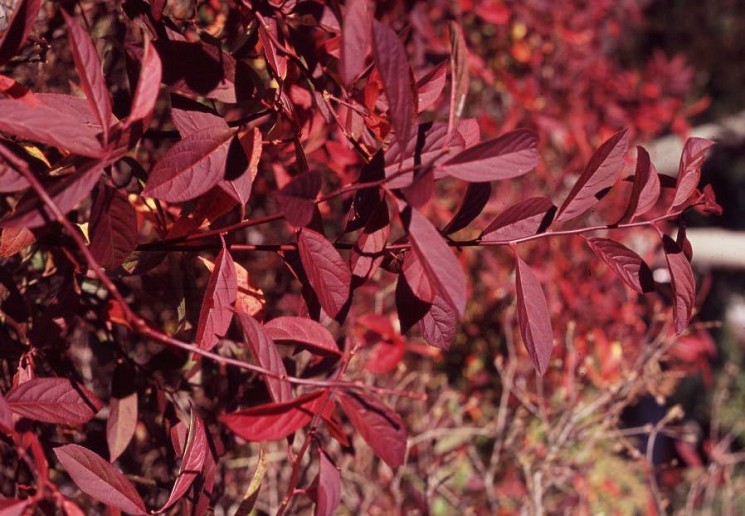 The children of the autumnal whirlwind bore,
In wanton sport, those bright leaves, whose decay,
Red, yellow, or ethereally pale,
Rivals the pride of summer.
-Percy Shelley

Itea virginica, the Virginia sweetspire, is one of our shrubs that often will set a high standard for fall color. This is usually a medium-sized shrub of three-to-five feet in height that normally will spread wider than it is tall. The genus name Itea is the Greek word for willow and alludes to the resemblance of these leaves to those of willows. The simple, alternate, deciduous, elliptic to oblong shaped leaves are two-to-four inches long, with a finely serrated margin and have a lustrous dark green color during the growing season. Beginning in September the leaves show hints of the dramatic crimson or maroon color that will eventually cover the plant in October. The colorful leaves often persist quite long and in some years are still present as late as Thanksgiving.

Reliable autumn color alone could be reason enough to include this plant in our landscape but there is more to enjoy.  Itea virginica flowers in June and July when many other plants in the landscape have finished their spring display. While each white, slightly fragrant, flower is only up to one-half an inch in diameter, they are borne on six-inch long flower spikes arching above the leaves. Visually enticing rather than grand these flowers nonetheless are highly attractive to butterflies, as well as bees, which help to pollinate the flowers. These fertilized flowers in turn later produce small dry capsules which spill out seeds eaten by numerous species of birds. The characteristic dense habit of this shrub also provides cover for wildlife.

The species name virginica of course refers to the state of Virginia but often in plant taxonomy it is thought of more as referring to southeastern United States. Indeed this native plant occurs from southern New Jersey and Pennsylvania south to Florida and west to Louisiana and to East Texas. It often occurs bordering streams, ponds and lakes and may also be found in swamps. It will grow in full sun or shade and the stems facing full sun tend to develop a reddish color.

In addition to the native species there are several cultivated varieties available. One is Itea virginica ‘Henry’s Garnet’ which is superior to the species in flowering and fall color and won the prestigious Pennsylvania Horticultural Society Gold Medal (Styer Award) in 1988. This cultivar was originally found in Georgia by Mary Gibson Henry (1884-1967) in 1954.

On your next visit to Mount Auburn look for Itea virginica along Rosebay Avenue, Birch Avenue, Laurel Avenue, Eagle Avenue, Halcyon Path and Oak Knoll Path among other locations.

*This Horticulture Highlight was originally published in the October 2010 issue of the Friends of Mount Auburn electronic newsletter.