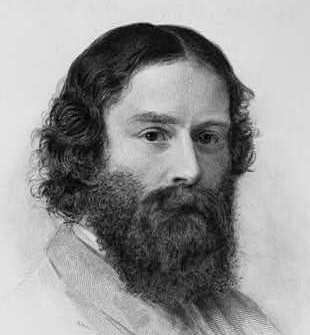 A poet, editor, and diplomat, James Russell Lowell was born in Cambridge, Massachusetts on February 22, 1819.

Lowell was a descendent of the famous Boston Lowell family. At the age of 15 he was admitted to Harvard College where he met Henry Wadsworth Longfellow (Lot #580, Indian Ridge Path), a newly appointed professor. Lowell was regarded as a poet by his peers at school, yet he chose to study law following graduation and completed his degree from Harvard Law School in 1840. He became engaged to Maria White the same year, and her interest in poetry encouraged him to pursue his literary talents.

In 1841 Lowell published his first book of poetry,  A Year’s Life; three years later he published his second book, Poems, First Series. The latter was a critical triumph, and his subsequent publications secured his success as a poet, critic, satirist, and humorist. He married Maria in 1844, and the devoted couple spent time together involved in literary circles and working for the abolitionist movement.

The next several years marked a series of tragedies: in 1847 Lowell’s first child, Blanche, died; his third child, Rose, died soon after birth; his son, Walter, died in 1852; and finally his wife died in 1853. Despite the hardships in his personal life, Lowell continued to experience success in his career. He succeeded Longfellow as Professor of Modern Languages at Harvard, worked as editor of the Atlantic Monthly, and then as editor of the North American Review. In 1857 he married Frances Dunlap, the governess who had been caring for his only surviving child following Maria’s death.

In 1865 Lowell delivered his “Commemoration Ode,” a critically acclaimed poem honoring those who died in the Civil War. This was the beginning of Lowell’s interest in the state of politics in America, and he dedicated himself to the election of Rutherford B. Hayes. Once elected, Hayes made Lowell U.S. Minister to Spain. He worked as a diplomat in Spain for years before being sent to London, where he experienced diplomatic as well as literary success. He returned to the U.S. in 1880 following the death of his wife, and died in 1891 at the age of 72. Adapted from the research of Judy Jackson and Cathy Breitkreutz, as published in Mount Auburn’s Person of the Week: James Russell Lowell, 2000.