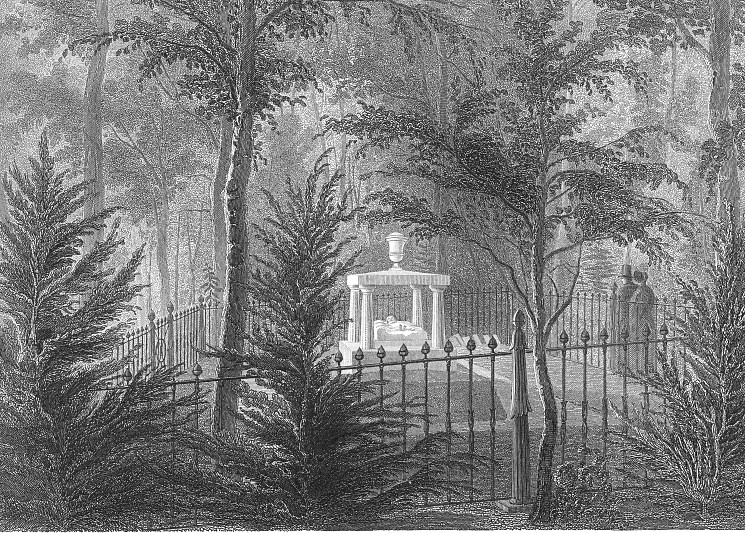 One of the most prominent sculptors in Boston in the mid-19th century was Henry Dexter. Born in Nelson near Utica, New York in 1806, Dexter later moved with his family to Killingly, Connecticut, where Henry grew up and became a successful blacksmith.

“But Nature had other things in view. She had not dedicated him to Vulcan, but to Apollo, and she was not to be baffled in her designs.”  – Henry Tuckerman, American Artist Life

In 1835 he was overcome by a desire to be an artist. Although he had no previous training in the fine arts, Dexter acquired the necessary skills within a little more than a year. In 1836 he moved to Boston and began sculpting portrait busts. His efforts were so well received that he was able to settle in Boston and earn a comfortable living for the next forty years.

Portrait sculpture comprised most of Dexter’s work, but he also executed funeral monuments.  His first, and most famous, of these projects was the monument to Emily Binney on Yarrow Path (Lot 681) at Mount Auburn Cemetery. “Little Emily” was the four-year-old daughter of Charles J. F. Binney, a wealthy Boston merchant. Emily died in 1839.  Soon after, the commission for her memorial was given to Dexter who created a life-size marble portrait of her lying as if asleep.

Completed in 1842, the sculpture was exceptional for several reasons: it was the first successful life-size marble figure carved in the United States by a native-born American artist; it was thought-provoking, depicting the deceased as if asleep thereby asking the viewer to distinguish between consciousness and sleep and to compare  this with life and death; it was also sentimental, inviting the visitor to contemplate the tragedy of a life cut short and to speculate on what it might have been; it was spiritual, suggesting the subject of innocence and its relationship to death and salvation. A marble slab next to the sculpture was inscribed:

“Shed not for her the bitter tear,

Nor give the heart to vain regret,

‘Tis but the casket that lies here­

The gem that filled it sparkles yet.”

The Binney monument was an instant success and a major attraction at Mount Auburn-continually drawing large crowds of visitors. Unfortunately, despite the temple-like structure over the sculpture (created by Alpheus Cary), the marble figure deteriorated and in 1934 the monument was replaced by a granite marker. Emily Binney Monument by Henry Dexter, illustration from "A Concise History of and Guide Through Mount Auburn"