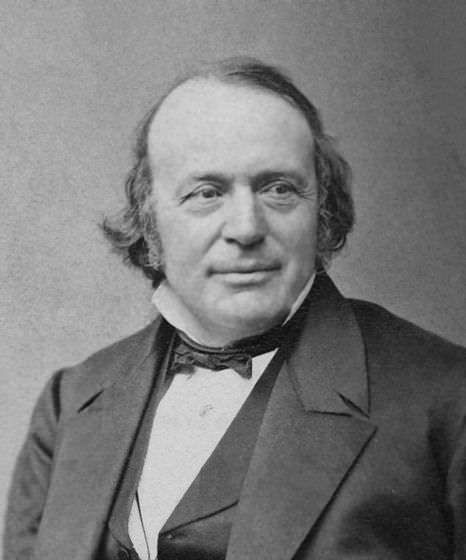 Louis Agassiz, scientist, geologist, zoologist and teacher, was born on May 28, 1807.

Born in French Switzerland, Agassiz displayed a love of nature and observation from a young age. He enrolled in medical school at the University of Zurich in 1824 and matriculated at Heidelberg in 1826 as he gained interest in natural history. He transferred to the University of Munich in 1827 where he turned his studies to fish.

Agassiz received his doctorate in natural sciences and a medical degree from Munich in 1830. He moved to Paris the following year to study fossil fish, and published the fruits of his research in a giant compendium featuring 1,200 illustrated plates. He accepted an appointment in zoology at a school in Neuchâtel in 1832, and gained the support of explorer Alexander von Humboldt.

He married Cecile Braun, a natural history artist, in 1833, and in 1836 began studying glaciers in Europe. His measurements and observations came together in Études sur les glaciers (Studies of Glaciers) (1840). Agassiz posited that Europe once experienced an Ice Age, and that the  motion of these sheets of ice sculpted the landscape. As his international reputation grew, his personal life suffered, and in 1845 Cecile took their children and returned to her family.

In 1846 the King of Prussia financed Agassiz’s tour of America which included a series of lectures at the Lowell Institute in Boston. His lectures drew enormous crowds, and Agassiz quickly became a popular figure. He accepted a professorship in natural history at the Lawrence Scientific School at Harvard, and raised the funds to open Harvard’s Museum of Comparative Zoology.

After Cecile’s death, Agassiz married Elizabeth Cary of Boston in 1850. She raised his three children, and together they opened a school for girls in their home. Agassiz began his 10-volume Contributions to the Natural History of the United States, with only four volumes completed between the years of 1857-62.

Agassiz denounced Darwin’s Origin of Species in 1859, instead professing that each species was a divine creation. Though he remained a popular figure, his scientific credibility was challenged. Following a trip to Brazil with his wife in 1865-66, Agassiz contributed 80,000 new specimens to Harvard’s Museum of Comparative Zoology.

In his final years, Agassiz continued encouraging the study of natural history and opened the Anderson School of Natural History on Penikese Island in Buzzard’s Bay with his wife. He died in 1873, and the news sent ripples through Boston and Cambridge: Harvard stopped all activities on the day of his funeral, Boston’s newspapers were edged in black, and a long procession traveled from Appleton Chapel to Mount Auburn. The Republic of Switzerland sent an Alpine boulder from a glacial moraine to serve as Agassiz’s monument. Louis Agassiz is buried at Mount Auburn in Lot 2640 on Bellwort Avenue.

Adapted from the research of Judy Jackson and Janet Heywood, as published in Mount Auburn’s Person of the Week: Jean Louis Rodolphe Agassiz,1999.