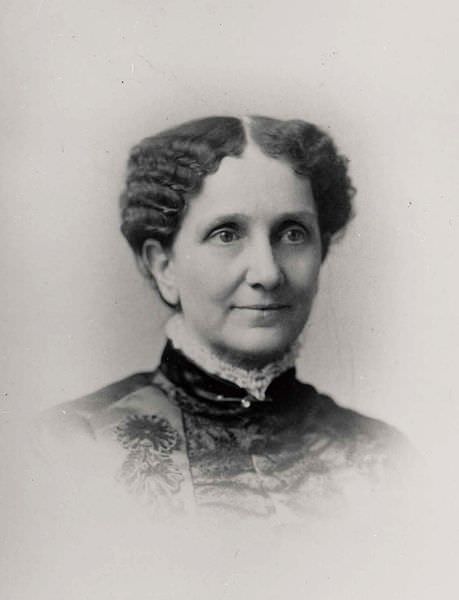 Born to a farming family in Bow, New Hampshire on July 16, 1821, Mary Baker Eddy went on to found the Church of Christ, Scientist.

Eddy experienced poor health in her youth, and as a result was tutored at home by her older brother. In 1836, she began studying with a pastor at her local Congregationalist church; however, she disagreed with the Calvinist doctrines of the Church and instead sought solace in the pages of the Bible.

At the age of 19, Eddy moved to South Carolina and married George Washington Glover, who died a year later after contracting yellow fever. This prompted Eddy to move back to New Hampshire, where she gave birth to a son, George. Her health began to deteriorate, and her mother began assisting with George until her death in 1849, at which point George was cared for by a family nurse.

Eddy became ill again in 1856 and spent much of the next six years bedridden, which led her to seek alternative forms of treatment. It was during this time that she began her exploration of spiritual healing, as found in the passages of the Bible. She believed that the strongest healing force was a patient’s will. In 1862 she met with Phineas Quimby, a healer from Maine, whose mental exercises can be best described as a form of hypnotism. Eddy took great interest in his work and studied his methods.

In 1864 Eddy moved to Lynn, Massachusetts with her second husband. She was experiencing improved health which allowed her to actively participate in the community and contribute articles to her local paper. In the winter of 1866, she slipped and injured her hip on a patch of ice which led to a fatal diagnosis from doctors. She focused on reading her Bible, and instantly felt invigorated. As her health improved, and her second husband left her, Eddy’s faith in the power of spiritual healing–what would become Christian Science–grew.

Unlike Phineas Quimby, Eddy believed healing came through the power of God, not physicians. Reinforcing her claims, Eddy stepped in to help heal a patient diagnosed with a fatal case of pneumonia. She succeeded, and the attending physician encouraged Eddy to write about her healing method. An essay entitled “The Science of Man” ultimately grew into Eddy’s 700-page text Science and Health (1875), still a best seller to this day.

Eddy quickly became embroiled in controversy as she developed her new religious healing movement. Former students spoke publicly against her teachings when they did not successfully heal patients of their own. To combat the financial strain resulting from her divorce, Eddy began renting rooms of her home and delivering public lectures. She formed the Christian Scientist Association in 1876, amidst intense public scrutiny.

With the support of her new husband, Asa G. Eddy (whom she had married in 1877), Eddy continued lecturing in Boston and was named pastor of the First Church of Christ, Scientist in 1879. She edited and published the Christian Science Journal every month and in 1892 approved the building of a Christian Science church in Boston. By 1902, the number of worshippers attending services had outgrown the Mother Church, and funds were raised to build the Mother Church Complex – the second largest worship hall in the United States.

Though Eddy’s movement experienced continual growth and success, her personal life faced constant scrutiny and she was frequently involved in legal battles (the most notable of which involved John Pulitzer’s 1906 claim that Eddy was senile and that her family was mismanaging her finances). To shield herself from the public eye, Eddy moved from Concord, NH to Chestnut Hill, MA to a more private enclave. It was from this home that Eddy established The Christian Science Monitor, intended to be an honest daily newspaper. Eddy died in 1910, with a funeral service held in her Chestnut Hill home. In 1995, Eddy was inducted into the National Women’s Hall of Fame as the first American woman to found and lead an international religious movement. Mary Baker Eddy is buried in Lot 6234 on Halcyon Avenue. Learn more about her monument.