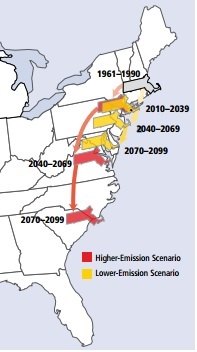 Scientific research indicates that if global warming emissions continue to grow without reduction, Massachusetts can expect dramatic changes over the next century. The research summarized in the Union of Concerned Scientists (UCS) article describes two different emissions scenarios: one higher and one lower as depicted in the illustration to the right.

This graphic shows that even with lower emissions,  Massachusetts’ temperature will become similar to Maryland’s, and at a continued rate of higher emissions, Massachusetts will feel more like South Carolina.  Temperature, however, isn’t the only thing that changes by the end of the century when our great grandchildren are alive. Precipitation, in the form of rain, not snow will increase by 20 – 30 percent.  That rain event won’t be a gentle, spring rain, but rather it will be heavy and damaging. This change, ironically, ensures there’ll be more droughts.

Mount Auburn already experiences seasonal droughts. For the 2014 season, a moderate drought began on June 27 and transitioned to a severe drought on August 8, which continued until October 27.  Mount Auburn watches the streamflow data at the dam of the Charles River in Waltham to determine drought severity. In addition to changing precipitation, global warming negatively impacts other areas.

Sea-levels are expected to rise 7 – 14 inches under the lower-emission scenario. Coastal flooding and storm surges will increase, and eventually, these changes will change the shoreline.  Human health will suffer from extreme heat and poorer air quality. Cod fishing, already under heated debate, and lobstering will both be at risk with rising sea temperatures.

Impacts on agriculture and forests will be seen. With lower emission scenarios, the long-lived trees may persist, but they will become increasingly vulnerable to disease, pests and competition.  For more details about Massachusetts’ changing climate and what you can do to lower global warming emissions, see the USC report.

Mount Auburn is aware of these future impacts and is strategically planning to reduce global-warming emissions, and making wise horticultural selections that can survive these dramatic changes.  Stay tuned for upcoming issues and web postings on how Mount Auburn is meeting these challenges.