May the Lichens be with You! 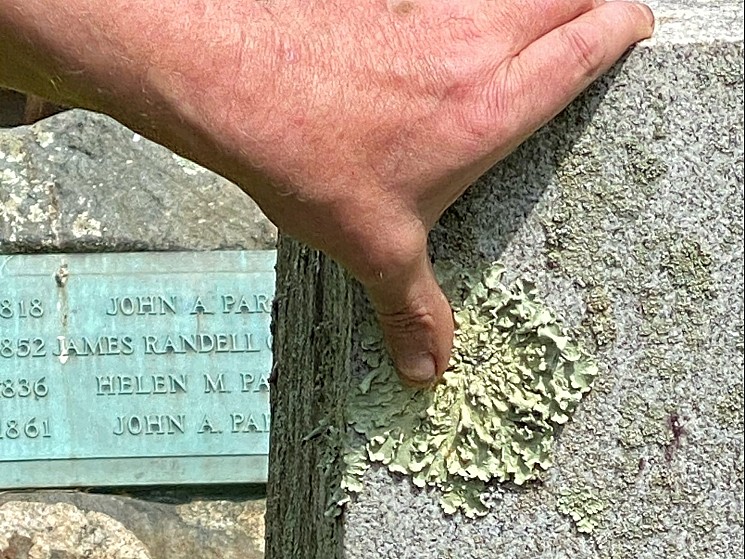 If flowers are commonly placed on a loved one’s final resting place, why shouldn’t lichens be allowed to reside on that loved one’s gravestone? After all, a lichen on a gravestone occupies a branch on the tree of life considerably closer to the branch occupied by that loved one than a chrysanthemum. Plus, that lichen could have an aesthetic quality similar to an attractive mosaic.

Mount Auburn Cemetery in Cambridge, Massachusetts, has a plenitude of gravestones, some of which host a plenitude of lichens. North, sound, east, and west-facing gravestones host different lichen species. So do granite, marble, limestone, and sandstone gravestones. Some of these lichens are typical inhabitants of trees who’ve decided it mightn’t be a bad idea to inhabit a rock surface for a change.

As I was walking around Mount Auburn’s capacious plot of land (174 acres), I noticed quite a few gravestones that weren’t hosting lichens. Why was this? Because fertilizers as well as automotive exhaust can result in a nitrification of a lichen’s habitat, and many lichen species (the large rosettes of Flavoparmelia caperata, as shown in the above photo, being an exception) don’t have the ability to deal with such pollutants. Likewise, the cemetery’s staff might have removed the lichens from many gravestones because lichens can camouflage names and dates, much to the displeasure of family members as well as the cemetery’s photo-taking tourists.

Let me add this tidbit of information: certain lichen species like Rhizocarpon geographicum have such a consistent growth rate that, if they’re measured, they can provide a good estimate of the data on the gravestone they might have camouflaged. Lichens not only can conceal a gravestone’s names and dates, but they can also damage their substrate — i.e., the gravestone itself. Particularly the ones on calcareous stones can alter that substrate chemically with oxalic acid, thus aiding and abetting its deterioration. Since the degree of deterioration tends to increase with age, older stones are more susceptible to colonization by lichens, that previously hadn’t been able to get a foothold — or, more accurately, hypha-hold — on the stone. (Note: A lichen uses the endolithic hyphae on its lower side to penetrate a rock surface.).

Here I should mention that the removal of lichens from a gravestone can damage not only the stone itself, but also the environment, particularly if a biocide like bleach is used. Fortunately, no biocides are used at Mount Auburn Cemetery, but it’s a different story at many other cemeteries. If a cemetery’s crew uses metal tools or even wire brushes, well, good luck — the lichen’s thallus (vegetative tissue) might be removed, but its hyphae may still remain in the stone, penetrating as deeply as 20mm. Penetration by these hyphae can cause a slow fragmentation of a gravestone’s surface.

I should also mention that certain lichens can serve as guardians of their gravestones, especially if those gravestones happen to be made of porous rocks like limestone. They’re able to perform this duty by reducing the water level inside the stone, an act that helps deter abrasion from wind, rain, and other abiotic factors. Some lichens might, just might, be capable of stabilizing poorly cemented gravestones, too.

I suspect that one’s dear departed granny would be quite happy if the marker of her final resting place was decorated by a bright orange Xanthoria parietina lichen…far happier than if that marker was simply a sterile upright marker. And if that granny had been a supporter of “green” causes, it’s likely she’d also be pleased to have a nice green Xanthoparmelia cumberlandii decorating her gravestone. Less pleasing to her, perhaps, would be the white residues of calcium oxalates left on her gravestone by dead lichens.

As for myself, I’d also be pleased, no, delighted to have lichens adorning my own gravestone. In addition to their aesthetic appeal, they’d be an indication of the biodiversity of the natural world, whereas flowers from a florist shop wouldn’t be an indication of anything other than a business transaction.

Lawrence Millman is a mycologist, author and explorer. He has led training sessions for the Mount Auburn Citizen Science program.