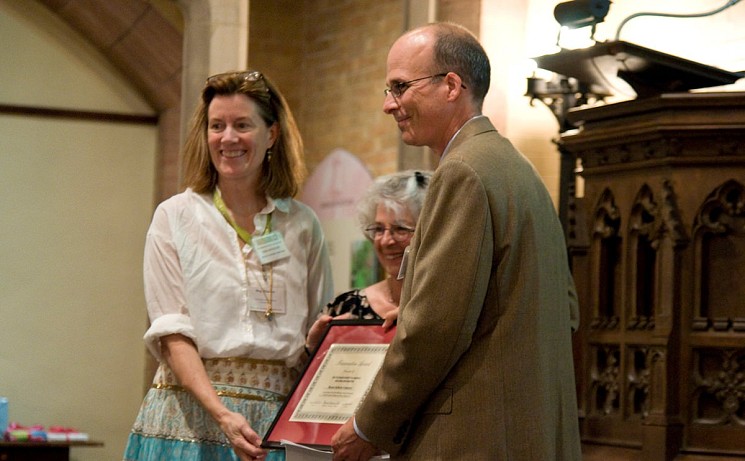 We are delighted to announce that Mount Auburn Cemetery was honored by the Victorian Society of America/New England Chapter (VSA/NE) at their Preservation Awards Ceremony at Mount Auburn on June 27,2013. In the letter to the Cemetery announcing the award, Chair of the VSA/NE Preservation Awards Commission Peggy Clarke applauded the Cemetery’s preservation efforts noting that “Mount Auburn has had a monumental challenge throughout its history, with the care of both an important landscape as well as its monuments. We would like to honor it this year for the 2012 conservation of the Robert Gould Shaw Monument, the statue of Nathaniel Bowditch, and the reconstruction of the entrance way to Story Chapel. The statue of Hygeia, whose conservation was completed in 2008, will be acknowledged as well. Congratulations on these accomplishments!” Director of Preservation and Facilities Gus Fraser and Curator of Historical Collections Meg L. Winslow accepted the award on behalf of the Cemetery.

Other recipients honored included the Emerald Necklace Conservancy for its work in preserving and restoring landscapes in the Boston area; Hina Hirayama, Associate Curator at the Boston Athenaeum, for her book With Eclat, an account of the untold connection of the Boston Athenaeum and Boston Museum of Fine Arts; and a lifetime achievement award to Polly Flansburgh, creator and President of Boston by Foot, an organization that offers architectural and historical walking tours of the city.

This year marks the 40th anniversary the VSA/NE has awarded certificates of commendation to individuals for their “understanding and preservation of Victorian culture and artifacts.” Mount Auburn was the second recipient of the award in 1974. “So, coming full circle,” Peggy Clarke notes, “this year we once again honor Mount Auburn.” The Cemetery is deeply grateful to Edward W. Gordon, President of the VSA, for this commendation of its preservation efforts.