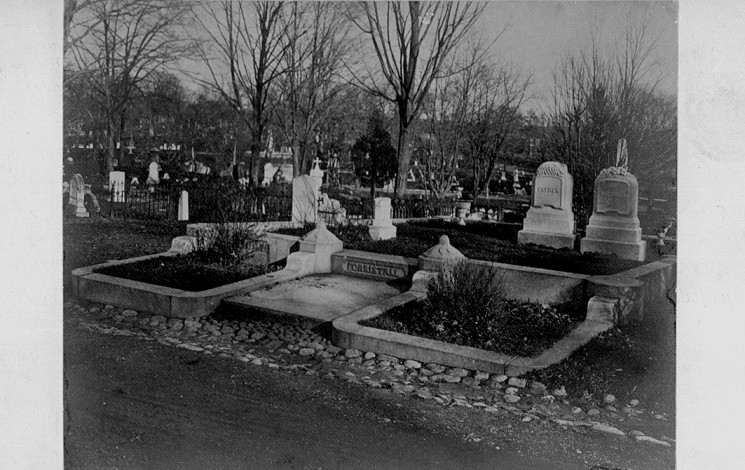 Bigelow Chapel 1861, note the cobblestone gutter surrounding the lot next to the Chapel

What is it?!  Is it a carriage path?  A walking trail?

What you are looking at in the picture above is a cobblestone gutter.  Many Cemetery roads and paths used to be lined with them.  In the middle of the 19th century, the Cemetery started to experience water drainage issues around burial lots and on certain paths and avenues.  The inability of water to drain from these lots was partly due to topography but also partly due to the way that many lots were graded after their purchase.  As a result, the Cemetery found itself with a huge erosion problem.  In order to combat it, Mount Auburn added several thousand feet of paved cobblestone gutters in 1865.  To cut down on cost, all stones used in the cobble gutters were found on Cemetery grounds.  The purpose of these gutters was to drain water away from lots by directing it downhill or into a drain.  This project was found to be so successful that two thousand feet of cobblestone gutters were added in 1866, and thousands more were added in the 1870s.  Eventually, the Cemetery realized that this wasn’t a sustainable practice, and began to properly grade paths and pave over cobblestone gutters.  In the 1920s and 1930s, the Cemetery removed almost all of the cobblestone gutters that lined major roads and paths, replacing many of them with a subterranean drainage system that is still in use today.  However, there still are some cobblestone gutters that still exist in the Cemetery.  The only gutters that are still visible in Mount Auburn line a grouping of private lots located behind the Nathaniel Bowditch statue. About the Author: Katie Robinson