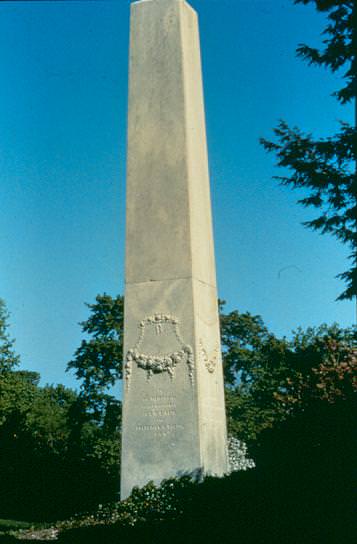 The Naval Monument, a memorial to members of the U.S. Exploring Edition lost in 1839 and 1840, was designed by Drayton, an artist of the scientific corps, in the 1840s.

The United States Exploring Expedition of 1832-1842 was created to gain a better understanding of oceanography and science, and to promote international trade. Its findings were the basis of much of American science, and many of the specimens gathered on the expedition formed the collection of the Smithsonian Institution.

The associate officers of the scientific corps designed this monument as a public memorial for the lost members of the expedition, on land donated by the Cemetery. Today, public monuments of this kind are typically seen in public parks, however its presence at Mount Auburn is a reminder that the rural cemetery was the predecessor to the public park and garden movement. The 20-foot white marble obelisk was carved by Struthers & Son, from Philadelphia, and is festooned with roses in relief, a different bloom on each side.

Described in Mount Auburn Illustrated, 1847, as “a lofty cenotaph of pure white marble, ornamented on the four sides with festoons of roses in relieve, and presenting altogether a monument of good proportion, strikingly chaste and simple.”  It reads:

(Front)
TO
THE MEMORY OF
LIEUTENANT JOSEPH A. UNDERWOOD,
AND
MIDSHIPMAN WILKES HENRY,
UNITED STATES NAVY

(Rear)
LIEUTENANT UNDERWOOD,
AND
MIDSHIPMAN HENRY,
FELL AT THE HANDS OF SAVAGES,
WHILE PROMOTING
THE CAUSE OF SCIENCE AND PHILANTHROPY,
AT MALOLO,
ONE OF THE FEEJEE GROUP OF ISLANDS,
JULY 24, 1940.
PASSED MIDSHIPMEN REID AND BACON
WERE LOST AT SEA, OFF CAPE HORN
MAY, 1839.

(Right)
THIS
CENOTAPH
IS ERECTED BY THEIR
ASSOCIATES
THE
OFFICERS AND SCIENTIFIC CORPS,
OF THE
UNITED STATES
EXPLORING EXPEDITION.