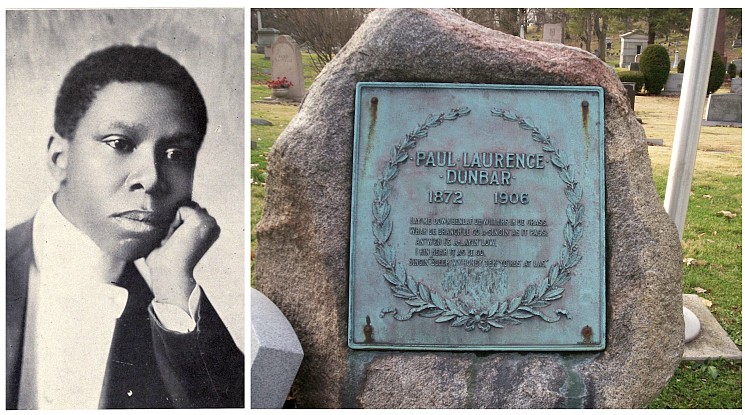 At the height of the Civil War, White officer Robert Gould Shaw led the famous 54th Massachusetts Regiment, the first all-black regiment in the Northeast, and died alongside his Black soldiers at Fort Wagner in 1863. Tributes came far and wide to honor the man who stepped away from his Boston Brahmin life to fight for the cause that would eventually lead to an end to slavery, as well as the brave men who followed him. For example, a plaque was added to his grandfather’s monument at Mount Auburn Cemetery on Pine Avenue in 1870.

Why was it that the thunder voice of Fate

And charge thee seek the turmoil of the state?

What bade thee hear the voice and rise elate,

Leave home and kindred and thy spicy loaves

To manhood’s home and thunder at the gate?

The cool and quiet of her dearer fane,

Than this hot terror of a hopeless fight,

This bold endurance of the final pain;

Since thou and those who with thee died for right

Have died, the Present teaches, but in vain!

Robert Gould Shaw and the Shaw monument on Pine Avenue at Mount Auburn Cemetery pictured below:

Dunbar’s father Joshua (born enslaved in Kentucky) served in the 55th Massachusetts, another “colored regiment,” under Col. Norwood P. Hallowell. Hallowell is buried at Indian Ridge Path at Mount Auburn Cemetery. When he was 16 years old, the budding poet wrote a poem to his father and other black soldiers called “Our Martyred Soldiers,” which includes the lines:

The wind may blow, the hail may fall,

But at the tomb is silence all;

Then o’er a martyr’s lifeless clay.

Dunbar went on to become the first commercially-successful African American poet. He is buried at Woodland Cemetery in Dayton, Ohio. Several organizations will celebrate his 150th birthday this year, including the historic home named for him in Ohio, now operated by the National Park Service.

About the Author: Rob Velella

Rob Velella is an independent literary scholar and creator of the American Literary Blog. View all posts by Rob Velella →