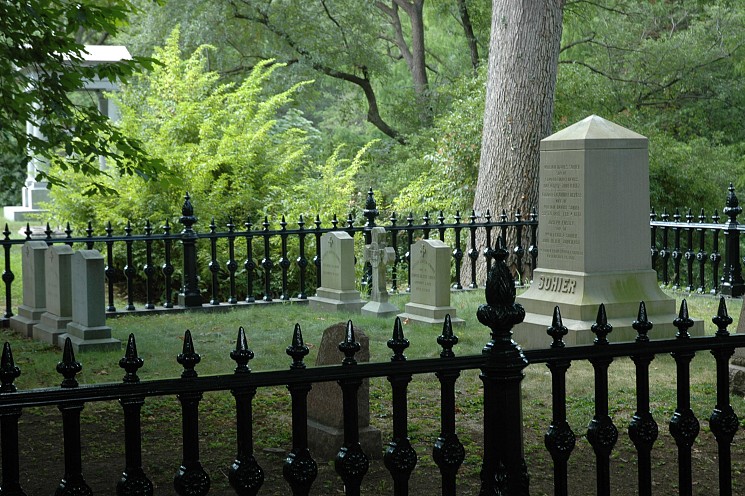 This article originally appeared in the August 2010 Friends of Mount Auburn electronic newsletter.

The Sohier family’s fence is a highly visible element of the landscape, with additional aesthetic and cultural significance.  Sited on Indian Ridge Path at Lot 2216 this fence was chosen along with several additional fences to receive care based on its poor condition, high visibility, and perpetual care obligations. Check the lot this August 2010 to see the reinstallation of the right side of the fence after it has been restored by Cassidy Brothers Forge. Last year we were able to restore the left side of the fence and we look forward to the completion of this project.

This fence is an example of a mass-produced cast iron fence that could be found in a catalog. Cast iron furniture and fences were advertised as appropriate for a variety of outdoor uses.  As a result, similar designs were used in cemeteries, public parks, and homes.  Trade catalogs sold fence components separately, allowing families to create a custom design from mass produced elements.  The average fence cost about $140 to $350 per lot in the 1850s; however, the price could vary widely depending on the style of fence and the size of the lot.

Lot fences are recognized collectively as being particularly significant and a highly valued aspect of our landscape. In the mid-nineteenth century over 1,500 iron fences enclosed and adorned family lots at Mount Auburn Cemetery.  Most were removed by families before 1900 due to a new preference for granite curbing, and later to achieve an uncluttered landscape.  In the twentieth century, changing landscape ideals caused more fences to be removed, along with the burden of high maintenance costs and susceptibility to damage.  Today, 62 fences remain and the Preservation & Facilities Department is committed to preserving this unique collection.