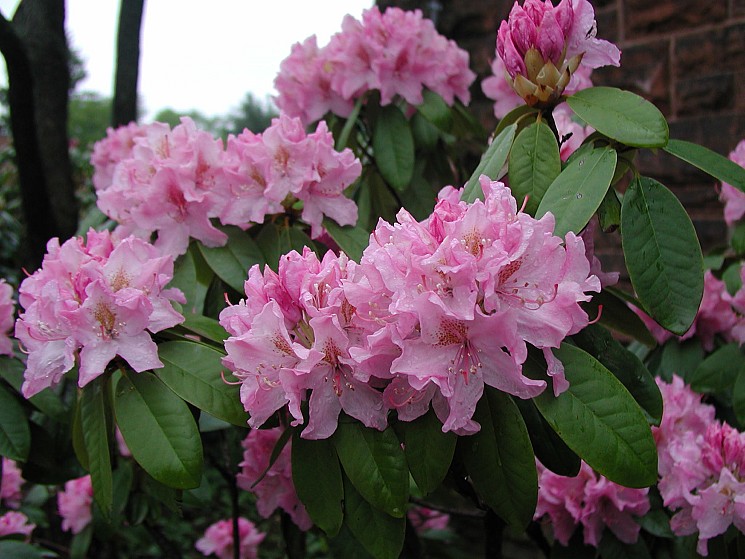 Dr. Jacob Bigelow (1787-1879) Lot 116, Beech Path, the visionary founder of Mount Auburn wrote the above encomium in his expanded second edition (1824) of Florula Bostoniensis, his seminal flora of New England.

Rhododendrons are a vast genus of plants with over one-thousand deciduous and evergreen species worldwide and more than 10,000 cultivated varieties. In 1753 Carl von Linne (1707-1778), who we know as Linnaeus, published Species Plantarum, the archetypic manual of plant taxonomy. Therein the genus name rhododendron was botanically formalized using the Greek words rhodon (rose) and dendron (tree).

The rhododendron Bigelow described was Rhododendron maximum, the rosebay. For those who complain of the use of scientific names as too complicated be reminded that in Mark Catesby’s (1683-1749) Natural History of Carolina, Florida and the Bahama Islands (1731-1743) this same rosebay was originally known as Chamaerhododros lauri-folio semper virens floribus bullatis corymbolis. One of Linnaeus’s great legacies was the acceptance of binomial nomenclature which forever ended such cumbersome polynomials.

Rhododendron maximum’s largest natural range is in the central and southern Appalachians although disjunct populations have been found in all the New England and Middle Atlantic states as well. This shrub grows 4 – 15′ tall. Each white, purplish-pink or rose colored , bell-shaped flower has five petals. The three upper petals are slightly larger than the lower pair and the middle of the upper three petals is always marked with green spots. A truss of multiple flowers occurs clustered at the end of stems creating massive floral displays above great mounds of greenery. The dark evergreen leaves are 4-8″ long. The curious winter curling of these leaves reduces their exposure to desiccating sun and wind when the frozen ground cannot readily provide additional water.

An even more commonly used native evergreen rhododendron is Rhododendron catawbiense, catawba rhododendron. Six to ten feet in size, with leaves 3-6″ long and flowers normally purple, this species has provided the parentage of countless cultivated varieties. Horatio Hollis Hunnewell (1810-1902) Lot 3799, Iris Path, in the latter-half of the nineteenth century created at his Wellesley home the largest rhododendron garden in New England, and undoubtedly the United States. His collection was the destination of countless visitors each June. An entry from his diary from the late 1890’s:

“and on 11 June… Rhododendrons, if possible, finer than ever! All agree that there is no shrub to compare with them for grand effect…”

Bigelow in the 1820’s, Hunnewell in the 1890’s, and we at Mount Auburn today are in agreement that these extravagantly fabulous shrubs await your unbridled admiration.

*This Horticulture Highlight was originally published in the June 2010 issue of the Friends of Mount Auburn electronic newsletter.