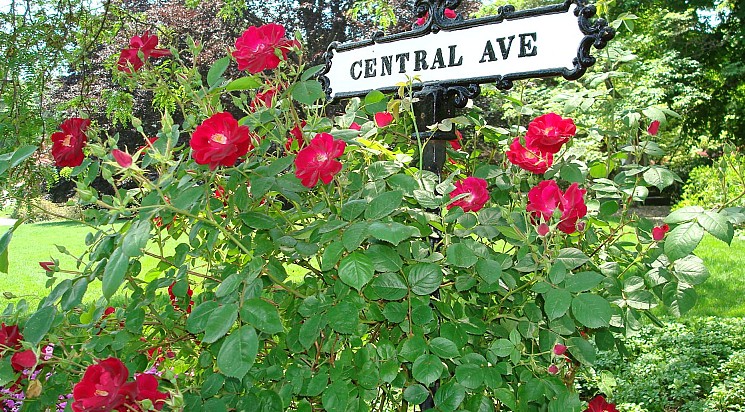 The rose, is one of the northern hemisphere’s best known, and most popular ornamental plants. The number of flowers they produce, the length of its blooming season, its elegance and charm, and its varied colors, sizes, shapes and fragrances, have helped imprint it favorably within numerous cultures. Actually, this was an ancient flower, on earth long before humankind. Fossils of roses found in Colorado, date to at least, as far back as 32 million years ago. Roses on a Monument, Photo by Hilary Hopkins

Rose cultivation began thousands of years ago in China and the Middle East. The ancient Greeks cultivated roses, associating them with their love goddess, Aphrodite. They brought them to Rome, where they became the favorite flower of Venus, the Roman goddess of love. In Greek literature, Homer wrote in the Iliad that roses decorated the shield of Achilles.  It has been written of Cleopatra, the Queen of Egypt, that when she first met the Roman, Marc Antony, it was in a room filled knee-high, with rose petals.  Roses are mentioned in the Bible, ‘Thus saith the Lord unto Esdras, … I have sanctified … seven mighty mountains, whereupon there grow roses … “ Esdras 2:10, 18, 19.  In Hindu belief, Pagoda Siri, one of the wives of Vishnu, was found in a rose. In England, the rose has long been the national flower. Roses grow in each of the fifty United States, even Alaska, and in 1986, the rose became the national flower of the United States. Taxonomically, the rose, belongs to the genus Rosa, which includes more than 100 species, and thousands of cultivated varieties. Roses have prickles, more often referred to as thorns (“truths and roses both have thorns” –anonymous). These shrubs and climbing vines are generally grouped among several types.

Species roses– These are naturally occurring roses that typically bear simple, five-petal, flowers. They include the ancestors of all the modern cultivated varieties (cultivars).  Most often produce colorful “hips” (fruit) in the fall.  We grow Virginia Rose, Rosa virginiana, the most common wild rose along much of the East Coast of the U.S., which is drought tolerant, with pink flowers. China Rose, Rosa chinensis, has pink to red flowers, is extensively cultivated in China, and is important in the breeding of many modern garden roses. Its flowers and fruits are used in traditional Chinese medicine.  Rugosa rose, Rosa rugosa, has sweetly scented, white, pink, dark-pink, or red flowers. This native to eastern Asia, with extreme vigor, is often found on the coast, is salt-tolerant, and has been cultivated for a thousand years in Japan and China. These species roses, were also likely grown, by Francis Parkman (1823-1893), Lot 2919, Indian Ridge Path, at his three-acre, Jamaica Plain home (neither his house or garden remain extant). That former horticultural wonderland, had over one thousand rose plants, and was the laboratory used to research his 1866 The Book of Roses. One quote, from this otherwise practical manual on planting, culture, propagation, etc. is “Yet all the poetry of the rose belongs to these old roses of summer…have been the silent interpreters of hearts…” Grandiflora- These are modern roses, typically tall plants that bear repeat blooms singly or in small clusters. We display Rosa ’Queen Elizabeth’, a continuous bloomer, having single, 4”, delicate-pink, flowers, with 26 to 40 petals.  A superb, multiple award winner, including All-America Selection, this has remained very popular, for decades, since it was first introduced in 1954. Look for this near Meadow Road. Floribunda- The blooms are borne in medium-sized clusters. We grow the semi-prostrate, Rosa ‘Seafoam’, introduced in 1964, which has creamy-white, double, pom-pom like, flowers, lasting long throughout the season.  Look for this at the Mary Baker Eddy monument, on Halcyon Avenue.  Rosa ’Chuckles’ has medium-pink, single flowers, 2-3 inches in diameter, which have a prominent white center.  Rosa’ Chuckles’ may be found at Story Road. Polyanthas-These are often compact, low-growing plants, ranging from one to two feet in height, with numerous clusters of many small flowers, each about one inch in diameter. Rosa ‘The Fairy’ has charming, light-pink flowers, which may last from early summer until frost. Look for this planted at the rear of the Sphinx. Climbing roses- These are cultivars with long stems that can be tied to grow up a support. Rosa ‘Don Juan’, has dark-red, very fragrant, double flowers, up to 5” across. Rosa ‘New Dawn’ is a sweet scented, pale-pink climber, which is somewhat shade-tolerant. Rosa ‘Climbing Iceberg’ has double, white, slightly fragrant flowers, which may bloom from June to September, if deadheaded. Rosa ‘Golden Showers’, has fragrant, large double, yellow flowers, with 20 to 30 petals. You may see many of these at Mount Auburn, growing on our path signposts. Shrub roses- This is a catchall category for modern hybrid groups, which are quite cold hardy, easy to grow, and bloom profusely throughout the season. ‘Carefree Beauty’, Rosa ‘Beubi’ produces clusters of lightly-fragrant, rich pink, double flowers.  At 3 to 4 feet tall, it may be used effectively as a hedge. ‘Knockout’, Rosa ’Radrazz’, has become very popular, due to its low maintenance, disease resistance, and long period of bloom. It has cherry-red, semi-double, slightly fragrant, flowers, and at Mount Auburn, has even been flowering past Thanksgiving Day. ‘Knockout’ rose may be found along Spellman Avenue. Quite a volume might be collected of all the verses and pleasant sentences that have been inspired by this queen of the flowers.

Oliver Wendell Holmes (1809-1894), Lot 2147, Lime Avenue, wrote: “Fame is the scentless sunflower, with gaudy crown of gold; / But friendship is the breathing rose, with sweets in every fold.”

The Keats aficionado, and early-twentieth-century imagist poet, Amy Lowell (1874-1925), Lot 3401, Bellwort Path, penned: “The silver-slippered moon treads the blue tiles of the sky, / And I / See her dressed in golden roses /… ”

Contemporary poet, Laura H. Kennedy offers: “I open to you like the petals of a rose / when you tell me / of moonburn in whispers with your eyes; … ”

Afua Cooper pens:  “The roses you brought me on that Saturday evening / in summer, have now turned a dull brown in the vase / yet, I refuse to throw them out / these faded roses…/ Because every time I see them I remember / with sharp precision every second we spent together / last summer /… ”

John Boyle O’Reilly (1844-1890), Irish-born, later notable editor of Boston’s The Pilot newspaper,  contributes:  “The red rose whispers of passion, / And the white rose breathes of love; / Oh, the red rose is a falcon, / And the white rose is a dove. / But I send you a cream-white rosebud / with a flush on its petal-tips; / For the love that is the purest and sweetest / Has a kiss of desire on the lips.”

On your next summer visit to Mount Auburn, seek out our many rose blossoms, displaying their obvious floral beauty, as well as providing us with powerful metaphors for the beauties of life.  Or view more photos of the Roses of Mount Auburn on our flickr stream today!