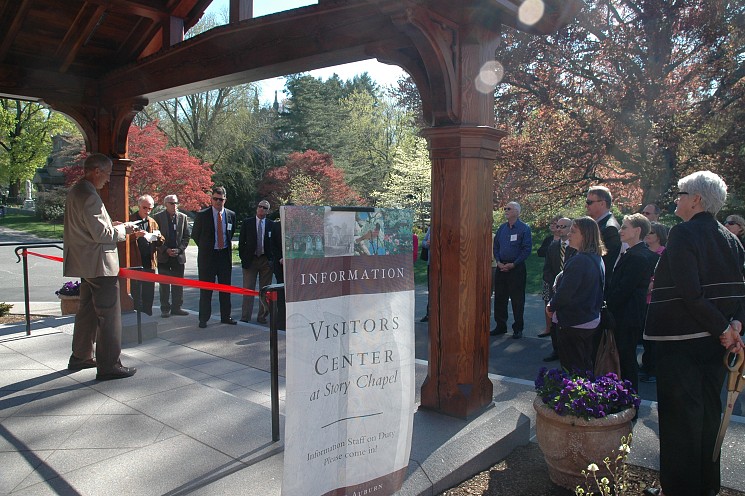 In 2009, the Friends of Mount Auburn was awarded a $132,000 matching grant by the Massachusetts Cultural Facilities Fund (MCFF) to build a front entryway for Story Chapel that would our Visitors Center more welcoming and accessible.

Story Chapel, a historic 19th-century structure built in 1898, is the setting for lectures, concerts, and special events open to the public, as well as private commemorative services. It houses the Visitors Center, which opened in 2008 and includes a welcome desk, a permanent exhibit on the Cemetery’s history, an introductory video about Mount Auburn today, a resource table with relevant books, public rest rooms, and the assistance of staff and volunteer docents.

The noted architect Willard T. Sears’ original 1896-1898 design of Story Chapel included an elaborate entrance “…through a large door, protected by a porte-cochere, which extends well over the driveway leading to the building from the main entrance to the cemetery.” (Cambridge Chronicle, 1898) Due to structural weakness and its inability to accommodate large hearses and most automobiles, the porte-cochere was removed on July 22, 1971. Funding for the Story Chapel Entryway Project has been provided by:

The Helen and Michael Schaffer Foundation