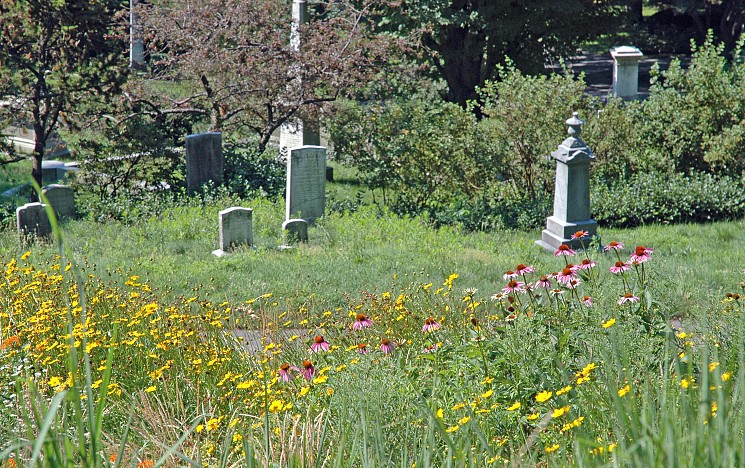 Wildlife enhancement has been an institutional priority at Mount Auburn for decades, and one of the most dramatic and significant initiatives has been the multi-year phased woodland restoration in Consecration Dell, a beautiful area with steep forested slopes and a vernal pool at its center. The Dell is ecologically significant in large part because of the diverse populations of migratory and resident birds it attracts each year, making it a destination for birdwatchers from near and far. Work to restore the Dell to a more natural state began in 1995 with the planting of native species near the banks of the vernal pool, and in 1997 we undertook our first large-scale planting project geared specifically towards wildlife habitat. With support from grants and individual gifts, we have expanded this habitat farther out from the space immediately surrounding the vernal pool, covering most of the woodland slopes surrounding it. Over the years we’ve added many thousands of plants comprising over 128 different native New England species of trees, shrubs, ferns, and other groundcovers. The woodland habitat has improved greatly and certainly attracts birds—especially migrating warblers—and birders as well.

Our latest step is to expand the woodland habitat to a new adjacent area, the North Dell Meadows, located atop the Dell’s northern slopes. This project is an expansion of habitat restoration work that we have undertaken over the past twenty-plus years, bringing our improvements into a new adjacent area in order to create contiguous habitat. We will utilize landscape improvement techniques that proved effective in previous projects in the Dell to install a sustainable native plant community appropriate for the area’s conditions. Altogether, Mount Auburn will purchase more than 13,600 plants to be installed in this project, which covers 8,200 square feet. Over the course of our twenty years of replanting in the Dell, we have recognized that the quality of vegetation is paramount when considering the effectiveness of wildlife habitat and the long-term ecological vitality of a site, so that is a top priority in our specific planting decisions.

A blend of naturalistic un-mowed grasses and wildflowers will form the underlying basis for an ecosystem that offers a multitude of benefits for pollinators and other insects, especially during the summer months. Masses of Fragrant Sumac, Virginia Rose, and Sheep’s Laurel will form sweeping drifts of vegetation that provide food sources, protection, and nesting opportunities for a wide range of species as well. Other herbaceous plants that will be added to the meadows include Coneflower, Mountain Mint, and New England Blazing Star. In addition, 329 trees and shrubs will be planted in ways that emphasize naturalistic massing, which features a contiguous grouping of different shrub and small tree species to form an intermediate layer in the woodland understory. The insect populations served by such a habitat are an important food source for migratory and resident bird populations at Mount Auburn. This “shrubland-habitat” is one that many birds use, and the expansion of these various habitat resources will be a new and important resource for the birds around the Dell.

Our 175-acre landscape has been recognized as a valuable green space in the increasingly urbanized Boston area, both as an oasis for the public and as an urban wildlife refuge. Developing sustainable habitat in the landscape has been an institutional priority for over two decades and was formalized in 2014 when our staff worked with a team of experts – ecologists, hydrologists, environmental engineers, ornithologists, herpetologists, landscape designers, and master planners – to create an official Wildlife Action Plan. Its goal was to assess our established habitat projects, and to develop a plan for future actions. The complete plan was released in 2015 and has been informing our decisions on maintaining our landscape as a sustainable habitat ever since.

The variety of habitat enhancement projects that we have completed to date, both in Consecration Dell and elsewhere in the Cemetery, all represent important steps in our ongoing effort to manage Mount Auburn as an urban wildlife sanctuary. Each site was designed with specific long-term habitat goals in mind. However, until they are linked together to form a large area of contiguous habitat-rich landscape, their value will not be fully maximized. Our goal of connecting a large part of Mount Auburn’s core to form a cohesive area of diverse habitats will enhance the effectiveness of each of the pieces we have built over the years. The North Dell Meadows are located at the northern end of the Dell and just south of the Narcissus/Beech Wildlife Corridor, and once replanted, will provide an essential link between these different but mutually-supportive wildlife habitats.

Please help us to protect urban wildlife because their survival is in our hands. To make a gift and join us in restoring native habitat, please click here.