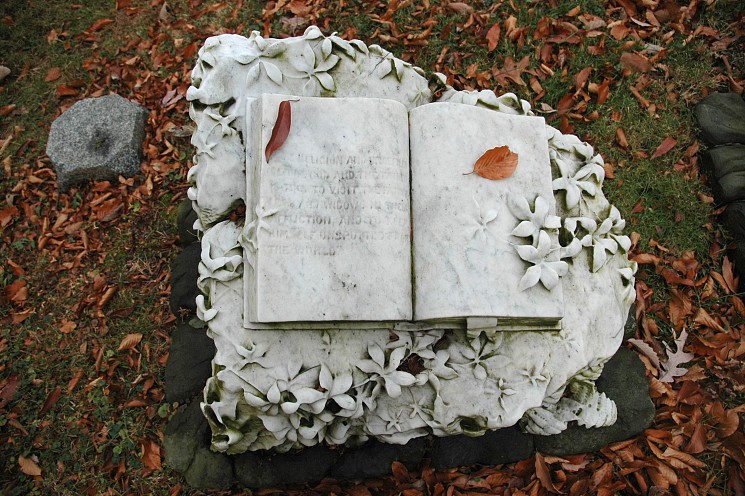 “We stand, as it were, upon the borders of two worlds; and as the mood of our minds may be, we may gather lessons of profound wisdom by contrasting the one with the other, or indulge in the dreams of hope and ambition, or solace our hearts by melancholy meditations.”

“I believe that Mount Auburn, if not a poem, is a book, a book we can never tire of reading. Its themes are those of all great literature— time, love, loss, war, and nature.” The unique relationships between Mount Auburn and the public it serves have long been reflected in poetry, prose, and lore. For decades writers have drawn upon Mount Auburn’s most timeless and universal themes. The Winter 2013 issue of Sweet Auburn Magazine celebrates a small selection of work the Cemetery has helped to inspire, reflecting 181 years of evolving ideas about life, death, and the Mount Auburn itself.  In our printed magazine we highlighted,  “The New Adam and Eve” by Nathaniel Hawthorne, “The First Snowfall” by James Russell Lowell, The Late George Apley by John P. Marquand, “Stairway to Heaven” by Robert Creeley, Still Alice by Lisa Genova and Lanie by Jane Kurtz.  Nevertheless, there are many other literary works that have drawn inspiration from the Cemetery, including…read more Longfellow: Commemorations on Family and Friends Mount Auburn Cemetery: Beauty on the Edge, by Richard Cheek~~

The Friends of Mount Auburn is excited to announce the publication of its long-anticipated photographic portrait of the Cemetery. During the past two decades, Richard Cheek has painstakingly explored Mount Auburn’s landscape, capturing its most iconic and celebrated views as well as its more intimate corners and hidden details. Mount Auburn Cemetery: Beauty on the Edge of Eternity celebrates the mood and spirit of this extraordinary place, as seen through Cheek’s stunning photographs. In addition to the vivid imagery showing the Cemetery in all four seasons, this 164-page hardcover book includes a foreword written by Dave Barnett, President & CEO of Mount Auburn, an introduction by Bill Clendaniel, President Emeritus, and short chapter introductions by historian Janet Heywood, former Vice President of Interpretive Programs. Poet Lawrence Ferlinghetti was so inspired by a visit to friend and fellow poet Robert Creeley’s grave at Mount Auburn, that he wrote two poems about his experience at the Cemetery.  “In the Creeley family plot in Mount Auburn Cemetery, Boston, just off the Tulip Path, there were already thirteen Creeleys and seven related Lauries with their names incised in a twelve-foot stone pillar, and poet Robert Creeley himself now just buried here still awaiting a gravestone under a Douglas Fir and a European Beech whose blossoms this windy wet April 2006 wave in the wrought air above him…” read more Since 2008, the Mount Auburn Book Club has met to discuss books written by or about individuals buried at Mount Auburn, include scenes that take place in Mount Auburn, or discuss any of the variety of topics that relate to Mount Auburn such as regional history, the natural world, or death and dying. The club meets the second Thursday of every month in Story Chapel at 10 AM and new members are most welcome! Sightseers were once introduced to Mount Auburn through a series of guidebooks. The volumes proved immensely popular, taking visitors of the time on detailed tours of the Cemetery. Today the guidebooks provide us with a wealth of information about the 19th-century rural cemetery landscape.

Click expand and then the “explore more” symbol on pages of the handbook with engravings of Mount Auburn to see current photos of the same areas in the Cemetery today! Our 2nd annual Coffeehouse was held on Thursday, April 26, 2012, in celebration of National Poetry Month. Area poets, writers, and musicians gathered once more to perform pieces inspired by Mount Auburn and related subjects. Among our performers this year was Cambridge’s very own Poet Populist, Toni Bee. We were also entertained by several published poets and popular musicians from the local folk circuit.

View photos and video from the event.

More than 200,000 visitors come to Mount Auburn each year to visit the graves of those buried here, participate in our programs, explore our many facets, and commune with nature.  A large percentage of our visitors now arrive with cameras as well as camera equipped cell phones and we love it when they share their photos with us!

Take a look at some of the fantastic photos taken by Mount Auburn visitors on our Flickr and Pinterest pages! A Glimpse Beyond, a unique multicultural celebration of life and death as told through music, dance, and puppetry.  This late afternoon event explored the experiences of the Cemetery’s two newest ”arrivals” as they walked through their grief and released the burdens of life under the guidance of a band of angels. Gradually, as the walk continued, the lessons of the angels took hold.  Following the routes of these two individuals, members of the audience passed through some of the most beautiful and iconic sections of Mount Auburn.

Explore more of a Glimpse Beyond “A Toast to a Treasure” Shaw Monument Dedication

On Thursday, September 27, 2012 Massachusetts Governor Deval Patrick attended a wreath-laying ceremony at the re-dedication ceremony for the newly conserved Robert Gould Shaw Monument. The generosity of S. Parkman Shaw, a descendant made possible a comprehensive conservation plan to preserve the cherished Hammatt Billings designed memorial and the surrounding lot fence.

View photos of the event and the monument conservation project on our Flickr site! Eileen Janiak at the Greenhouse in 2009

Eileen F. (Aries) Janiak, 64, passed away on September 24, 2012 following a courageous battle with cancer. She was born in Cambridge on September 3, 1948 the daughter of the late Augustus L. Aries and Irene V. (Whelan) Aries. Eileen is survived by her husband John J. Janiak of San Mateo, Florida and formerly of Burlington, Massachusetts. Eileen and John resided for many years in Burlington before moving to San Mateo for two years prior to her death.

Eileen spent her formative years in Wellesley and was a graduate of Wellesley High School. Prior to retiring, Eileen had spent over a decade working in the Greenhouse at Mount Auburn Cemetery. She is now buried just off of Meadow Road near the Greenhouse.