The Second Battle of Fort Wagner, South Carolina occurred on July 18, 1863.  It was a decisive Confederate victory in which the Union had 1,515 total casualties (246 killed, 880 wounded, 389 captured).  Three of those killed in action are … Continue reading →

Sesquicentennial: The Battle of Gettysburg

BATTLE OF GETTYSBURG July 1 – 3, 1863 Often referred to as the “High Water Mark of the Rebellion,” the Battle of Gettysburg was the Civil War’s biggest and bloodiest battle with 51,000 casualties, nearly one-third of the 157,000 troops … Continue reading → 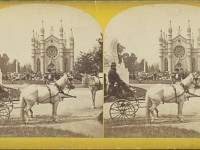 Decoration Day was first observed on May 30th, 1868 at Arlington National Cemetery.  A month earlier, General John Logan, commander in chief of the Grand Army of the Republic, officially designated May 30 for the purpose of “strewing with flowers … Continue reading →

With a $5,000 matching grant from the Massachusetts Sesquicentennial Commission of the American Civil War, and additional support from Harold I. Pratt, the Mildred Cambridge Memorial Fund, The Ruth & Henry Walter Fund, and other generous supporters, Mount Auburn … Continue reading →