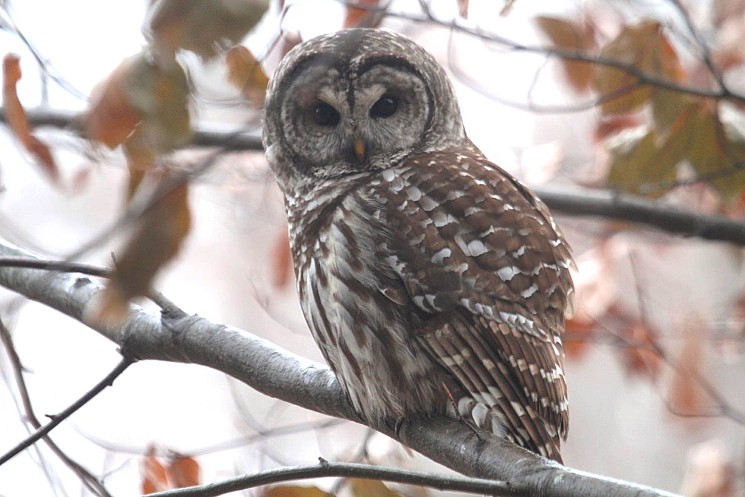 The Barred Owl is an uncommon visitor to Mount Auburn, only recorded a few times, although a recent sighting was made this past December!

There has been a dramatic incursion of this species all over Massachusetts this winter – the Greater Boston Christmas Bird Count recorded an all time high of 12 individuals on December 16th, many of these in downtown Boston and in Cambridge. The Barred Owl is the most vocal of all the owls, Roger Tory Peterson called it the “eight hooter” – often represented in the human phrase of “Who cooks for you, who cooks for you-all?”

The Barred Owl also has an amazing repertoire of moans, cackles and laughs, some sounding almost human-like. Barred Owls often call during the day and can be coaxed into call by imitation (even bad imitations).

Unlike the Great Horned Owl who can appear dangerous, the Barred Owl is not shy and can often be approached quite closely, usually appearing friendly and quite harmless, even when puffing up in an attempt to look terrifying.  However, Barred Owls and Great Horned Owls generally do not get along, so encountering them both here at Mount Auburn at the same time will still qualify as a rare event.

The Barred Owl is usually found in big forest areas, deeper and darker woods being their preferred habitat. This current 2012-2013 incursion into the Boston area is the result of a good breeding year, bringing about a diminished food supply for all and a mass movement into our area in search of nourishment.  I hope you all have a chance to find one.